Paul Collingwood says his successful career with Durham and England was "a dream come true" after announcing he will retire at the end of the season.

The 42-year-old all-rounder became the first England skipper to win a global tournament when he led the team to victory at the ICC World T20 in 2010.

Collingwood made his first-class debut in 1996, won the County Championship in 2013 and the One-Day Cup a year later.

The right-hander, who also played 197 one-day internationals and 36 Twenty20s, was one of Wisden's five Cricketers of the Year in 2007.

His final game will be at home to Middlesex, starting on 24 September. 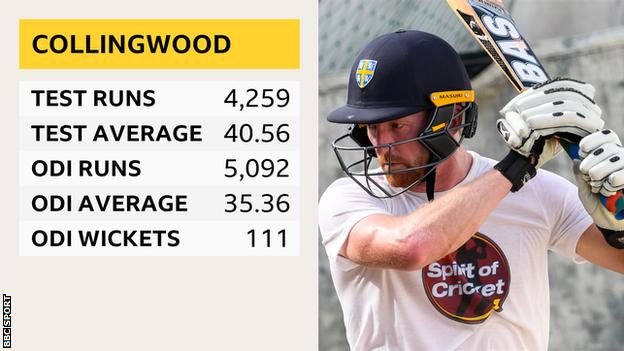 "To be able to play a sport I have loved from the first time I picked up a bat at the age of three, and play professionally and at one club, I am very proud," he told BBC Newcastle.

"To have won some of those trophies, the Ashes and the Championship here at Durham, it has been a dream come true. It is great to reflect on those things.

"I could have kept going on but everybody has a shelf life. It just feels that now is the time."

Collingwood has scored 16,891 runs in first-class cricket, including 4,259 in Tests, over the course of his 22-year career.

He also played in the Indian Premier League for Delhi Daredevils and Rajasthan Royals, and played and coached in the Australian Big Bash with Perth Scorchers.

'One of the greatest all-rounders'

Durham chairman and former England captain Sir Ian Botham said: "Paul is one of the greatest all-rounders to ever grace the game of cricket and to have him playing at Durham, his home county, for all these years has been an absolute privilege.

"Both on and off the field he has class, intelligence and charm and it is a testament to his incredible commitment and work ethic that he has been able to compete at the top level for the amount of time that he has.

"Colly is Mr Durham and it will be very strange without him, but on behalf of myself and everyone at Durham County Cricket Club, I would like to wish him the very best in whatever the future holds."

Michael Vaughan, who was England captain when Collingwood made his Test debut against Sri Lanka in 2003, posted on Twitter: "We had a legend retire from England this week in Alastair Cook and now another in Paul Collingwood retiring from the game altogether.

"Colly, like Cookie, just got on with his job. Fantastic man to have in your side and we should say a huge thank you for what he has done for English cricket."