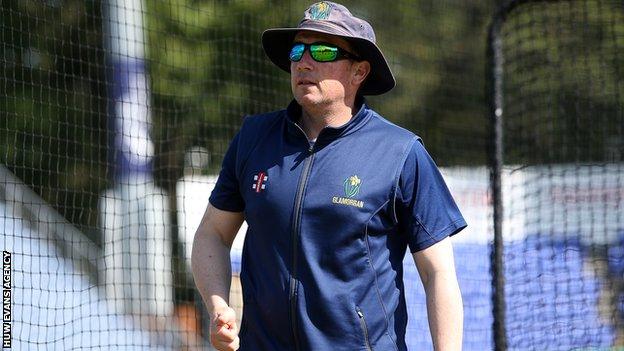 Glamorgan coach Robert Croft says he is pleased with the character of his squad despite missing out on a T20 Blast knock-out place for the first time in three years.

The county's last chance of honours in 2018 disappeared as they lost their last three matches.

"We've had a lot thrown against us in this tournament with injuries coming out of our ears," said Croft.

In addition, South African paceman Marchant de Lange missed the whole tournament through injury, David Lloyd was ruled out of half the games, captain Colin Ingram missed two through illness, while Usman Khawaja was called up for Australia A duties earlier than expected.

Glamorgan finished sixth in the South group, managing just two wins against fellow challengers despite collecting five out of five against the bottom three sides.

"I'm pleased with the character shown by our squad this year, lots of times turning up without your elite players, and we've come away with victories so that should give people confidence and belief going forward," was Croft's verdict on the campaign.

Skipper Ingram, who was again Glamorgan's top run-scorer, highlighted the number of contributions made by different players.

"There's been a lot of growth in our young players, Andrew Salter's bowled more overs than in previous seasons and has bowled brilliantly, Kiran Carlson's come on nicely and Ruaidhri Smith, to name a few.

"I felt we hit our straps a bit late in the tournament and ended up scrapping it out in the last few games. But our local guys are putting positive performances to win games, that's a massive step in the right direction, Carlson. Chris Cooke at stages, Craig Meschede.

"If we could have started the tournament better, it would have taken the pressure off towards the back end."

Ingram is keen to lead the side again in the 2019 T20 tournament, and will play in the One-Day Cup if he is not involved in the IPL.

Former Glamorgan batsman Mike Powell says it has been a bad season overall, with just one win each in the Championship and One-Day Cup, although he too is still encouraged by the progress of younger players.

"Bottom of the four-day comp, bombed out of the 50-over comp, didn't qualify for the (T20) quarter-final, in black and white that's a bad season," Powell said during BBC Sport Wales commentary.

"They're playing youngsters, but they weren't doing that at the start of the (T20) season, so I'm not sure.

"But there's a crop of youngsters that can definitely play, Lukas Carey missing out, Ruaidhri Smith doing well, Salter has matured so much and a real find in Kiran Carlson, who could end up on an England A tour.

"So there are youngsters brought through the system you can really work with, if you add your overseas (players) and give them responsibility at the right time, I think they've got something to build on... but hopefully next season we'll see a better blend."