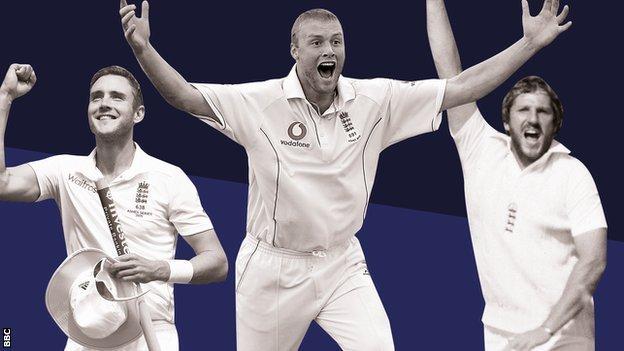 England have played 999 Test matches, but which one of them is the greatest?

To mark their 1,000th Test - against India at Edgbaston on 1 August - we are asking you to pick your favourite.

The Test Match Special team has drawn up a shortlist and now you can vote on which you think is England's greatest Test by ranking your top 10.

The results will be revealed in the Tuffers & Vaughan Show on BBC Radio 5 live, on Monday, 30 July.

If you need any help deciding, brief details of the 16 shortlisted matches are below the ranking tool.

A match which led to the birth of the most famous of cricketing contests: The Ashes.

In a one-off Test, England slumped from 51-2 to 77 all out to suffer their first defeat against Australia on home soil.

When England next toured Australia those ashes became real - a pair of bails were burned and put into the now famous urn to become The Ashes.

The most famous and controversial of the Bodyline Tests and a match that caused a diplomatic incident.

England's tactics had already angered the hosts, with a flashpoint coming when a Harold Larwood short ball struck Australia captain Bill Woodfull over the heart. Tempers flared further later in the match when Bert Oldfield top-edged Larwood and suffered a fractured skull.

Bodyline was discussed by the governments of both nations and there was the possibility the series would not continue. Amidst the furore, this was England's most emphatic win in a series in which the Ashes were retained.

England won by an innings and 170 runs

Known as the 'Laker Test', following an incredible performance of off-spin bowling by England's Jim Laker.

After his side piled up 459, Laker set about Australia on a spinning pitch - precipitating their collapse from 48-0 to 84 all out in the first innings with an incredible haul of 9-37.

He went one better in Australia's second innings, taking all 10 wickets in the innings for just 53 runs in 51.2 overs - giving him iconic match figures of 19-90.

The win put England 2-1 up in the series - which they closed out with a draw in the decider at The Oval three weeks later.

The match which had it all. All four results were still possible off the final ball of a pulsating encounter.

It ended in a draw when England failed to score eight off Wes Hall's fiery final over, or six off the last ball.

To add to the drama, England's Colin Cowdrey came out to bat with a broken arm - an injury sustained facing Hall earlier in the game.

With his arm in plaster, Cowdrey managed to provide support at the non-strikers' end for two balls to ensure England got away with a draw. If he had not had walked to the crease, the Windies would have won.

England were 135-7 in their second innings, still 92 runs short of making Australia bat again, when Ian Botham was joined at the crease by Graham Dilley.

Botham, replaced as captain after the previous Test, hammered 149 not out as he and Dilley added 117. Bob Willis did the rest, taking 8-43 as Australia were shot out for 111.

England, who at one point were odds of 500-1, became only the second team to win a Test after following-on.

Just days after his heroics in Leeds, Botham cut down Australia again - this time with the ball.

His spell of five wickets for one run ruined any chance the tourists had of overhauling a fourth-innings target of 151.

Australia had been going well before Botham's intervention - they fell from 87-3 to 121 all out.

A further victory at Old Trafford ensured England would win an Ashes series they so nearly lost.

The stage for one of the greatest individual battles between batsman and fast bowler the game has seen.

England were going well in their chase of 247 to draw level in the Test series when Allan Donald opted to bombard England's stoic opener Michael Atherton with some ferocious fast bowling - angered by the Lancastrian's refusal to walk after appearing to glove behind.

The paceman worked himself into even more of a fury when Atherton's batting partner Nasser Hussain edged behind and young wicketkeeper Mark Boucher dropped the simple chance.

Donald roared his disapproval and England rode out the storm to complete an eight-wicket victory which was made even sweeter by a narrow, series-clinching victory in the fifth Test at Headingley.

A series clinched in near-darkness on a ground where Pakistan had never lost in 34 previous matches.

A Michael Atherton marathon kept England in touch, before Darren Gough and Ashley Giles bowled the home side out for 158.

England reached their target of 176 with 15 balls of the match remaining, winning a series in Pakistan for the first time in 39 years.

England's narrowest Test victory in terms of runs and one that turned a thrilling Ashes series.

England scored 407 on the first day, but after slumping to 75-6 in their second innings, needed Andrew Flintoff's hitting to set Australia 282 to win.

Beginning the fourth day on 175-8, Australia somehow chipped away, even after Shane Warne trod on his stumps. With England's hope all but gone, Michael Kasprowicz was adjudged to have gloved behind, leading Flintoff to famously console not-out batsman Brett Lee.

Another captivating tussle in perhaps the greatest of all Test series.

There were moments of brilliance from England throughout - from Andrew Flintoff's first-innings century to 12th man Gary Pratt's famous run out of a furious Ricky Ponting in Australia's second innings.

It all boiled down to a dramatic chase of 129 for England, who lost regular wickets to Brett Lee's thunderous fast bowling and Shane Warne's mesmeric leg-spin.

However, Ashley Giles and Matthew Hoggard held their nerve to see England over the line and to a victory which put them 2-1 up with one to play.

The scene of England's first Ashes series triumph in 18 years as Michael Vaughan's men battled to a famous draw at The Oval.

Again there were heroic performances throughout: Andrew Strauss' 129, Andrew Flintoff's tireless bowling and, on the final day, Kevin Pietersen's counter-attacking 158 when Australia sensed their opportunity to win the game and save the series.

The celebrations went long into the night before an open bus top parade around London.

The team was honoured for their achievements with MBEs - while captain Michael Vaughan and coach Duncan Fletcher were given OBEs.

James Anderson figures lower down this list for his bowling achievements, but it was with the bat that he is remembered in 2009.

With England battling to save the game on the final day - and with the Australians becoming increasingly fraught - Anderson soaked up 53 balls while number 11 Monty Panesar survived 35 deliveries as the hosts somehow avoided a series-opening defeat.

The result was to prove critical in the wider picture of the series as England went on to win at Lord's and The Oval to complete a 2-1 series win.

England won by an innings and 157 runs

England will perhaps never have a finer opening day to a Test in Australia.

In front of a packed Boxing Day crowd, they bowled out the hosts for 98 and then raced to 157-0 at the close.

Victory was inevitable once Jonathan Trott hit an unbeaten 168.

It meant England would retain the Ashes, and victory in the final game in Sydney ensured their first series victory down under since 1987.

Few gave England any hope of beating an India team containing the legendary Sachin Tendulkar in this series - especially after a heavy nine-wicket loss in the series opener in Ahmedabad.

However, Alastair Cook's side proved everybody wrong - Kevin Pietersen producing one of his finest knocks to score 186 on a turning wicket.

A 10-wicket victory was set up when England's spinners - Monty Panesar and Graeme Swann - shared all 10 wickets in India's second innings.

A further victory in Kolkata meant England won in India for the first time in 28 years.

The men responsible for the world record 10th wicket partnership were debutant number 11 Ashton Agar, who hit an incredible 98, and the late Phillip Hughes.

The game seesawed towards a captivating conclusion as Australia's tail - superbly shepherded by Brad Haddin - so nearly reached their fourth-innings target of 311.

James Anderson had other ideas, however, and he produced an innocuous-looking delivery which Haddin nicked behind.

England had pulled the game out of the fire and would once again go on to win the series.

England won by an innings and 78 runs

The Test in which Australia were bowled out for just 60 on the opening morning thanks to a magical spell of bowling from Stuart Broad.

He took 8-15 as Australia seemingly edged everything they played at to either the keeper or an acrobatic slip cordon.

Joe Root's century ensured no way back for Australia, who were humbled inside three days in a defeat which goes down as one of their most embarrassing in history.

Voting closed at 08:30 BST on 30 July. Any selections made after that time were not included in the final ranking.