"This time last year, a lot of pundits were saying we would go down."

What do pundits know? Fast forward to September 2017 and Essex had won the County Championship title by 72 points. They were unbeaten, and a country mile ahead of their rivals.

But after a winter of change off the field, what's in store for the county champions this season? There are definitely no certainties. Middlesex, title winners in 2016, were relegated a year later.

With the 2018 County Championship campaign set to start on Friday, BBC Sport takes a look at what to expect over the next six months.

Essex 'have it all to do'

The former England and Yorkshire batsman has a tough job to follow in the footsteps of Chris Silverwood, who led Essex to their first title since 1992 last year, but is now England's fast-bowling coach.

"As defending champions we've got it all to do. This time last year a lot of pundits were saying we'd go down, this time they're saying we're favourites to win it.

"If we play our best cricket, we're a match for anyone in this division."

By his side will be ex-Hampshire and England all-rounder Dimitri Mascarenhas, appointed in February.

"The most important thing in appointing Dimi was his character," McGrath added. "He's fitted in really well as I knew he would. He's a great addition to our squad."

Alastair Cook will miss their first two games against Yorkshire at Headingley and at home to Lancashire, but England's leading Test run-scorer is available for the next three fixtures, before the Test series against Pakistan begins in late May.

The county have also strengthened their pace bowling unit by bringing in Australia international Peter Siddle and Matt Coles from Kent.

Can Notts or Worcestershire 'do an Essex'?

What made Essex's feats all the more remarkable last season was the fact they had only been promoted from Division Two the previous campaign.

So can history repeat itself?

Nottinghamshire and Worcestershire, who came up to Division One, both enter new eras in 2018.

Worcestershire were rocked by the departure of head coach Steve Rhodes in December following an internal investigation into his conduct, while Notts begin life without long-serving captain Chris Read.

Nottinghamshire are under the stewardship of new captain Steven Mullaney following Read's retirement at the end of last season.

Notts have huge experience throughout the side, and a formidable pace attack including Stuart Broad, Jake Ball, Luke Fletcher, Mark Footitt and Harry Gurney.

Their batting line-up has been weakened by the departure of Brendan Taylor to Zimbabwe, Read's retirement and Alex Hales' decision to only play white-ball cricket.

However, new signing Chris Nash from Sussex and New Zealand batsman Ross Taylor bring more than 330 first-class games between them.

Nottinghamshire head coach Peter Moores believes there is not much to separate the eight counties in the top tier.

"All the teams in Division One are very strong," the former England head coach told BBC Radio Nottingham.

"Only eight [sides] in the first division means that, even if you're playing well, it's hard to get in a position of safety right until the end.

"You're targeting to be in the top three or four going into the second half of the season, so you can have a real push at trying to win it. To do that, I think the first five games are big, it's important to get some wins in that and we are going to have to play some good cricket."

Surrey looking strong - the rest of Division One

One of the pretenders to Essex's crown is Surrey.

Under new skipper Rory Burns, the south London side are looking for their first County Championship title since 2002.

They made a statement of intent on Tuesday, signing former South Africa fast bowler Morne Morkel on a Kolpak deal.

There are also strong rumours that India captain Virat Kohli will join on a short-term contract before India's Test series against England later this summer.

However, the loss of Kumar Sangakkara - who scored 1,491 runs in 16 innings in 2017 before retiring - could leave them short on batting depth, especially if opener Mark Stoneman cements his England place.

Yorkshire do not appear to be the formidable force they were when they won back-to-back titles in 2014 and 2015, and will be depleted by England call-ups throughout the campaign.

They have lost bowlers Liam Plunkett and David Willey to the Indian Premier League for the first part of the summer, while leg-spinner Adil Rashid's decision to ditch red-ball cricket is also a blow, but they have plenty of experience throughout the squad.

Hampshire could surprise a few this year. They have recruited superbly, signing world-class South Africa pair Hashim Amla and Dale Steyn, along with proven county cricketer Sam Northeast from Kent - although paceman Steyn may only be available for a couple of games.

Somerset scraped survival in the final round of fixtures last season at the expense of Middlesex. In Jack Leach, they arguably have the best spinner in England - although it remains to be seen how much time the 26-year-old will be on national duty.

Gillespie wants Sussex to have fun

Arguably the signing of the close-season has been on the south coast.

The former Australia bowler is regarded as one of the finest coaches in the game, having led Yorkshire to successive County Championship titles in 2014 and 2015.

And the 42-year-old has promised to bring his own brand of cricket to Hove.

"It's a great club, got some fine players, some fine coaches and I'm looking forward to working with everyone, we're all on the same page," he told BBC Sussex.

"We want to play some good cricket and have a bit of fun along the way.

"There's a fine group of young players coming through, some good experienced heads, all that combined makes for an exciting mix. But I just love county cricket, I've always enjoyed it, it's good fun.

"Where we can we'll be looking to give opportunities to young guys. Every player starts as a young player, everyone just needs an opportunity."

Who's knocking on England's door?

With England's Test side unsettled after a difficult few months in Australia and New Zealand, the selectors may be dipping into the county cricket pool this summer.

But who are the uncapped players on the fringes? 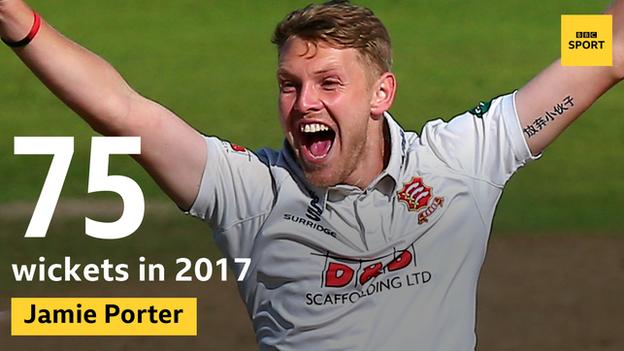 Essex seamer Jamie Porter was the leading wicket-taker in the County Championship last season. The 24-year-old's 75 wickets came at just 16.82, including career-best match figures of 12-95 against Somerset.

"It's something I've dreamt about for a long time, it's hard not to think about it," Porter told BBC Essex on his England aspirations.

"But it's out of my control. The only thing I can control is what I do for Essex. I'm going to try to take care of that and then hopefully the rest will sort itself out."

With Broad, James Anderson, Chris Woakes and Ben Stokes cemented as England's pace bowling unit, Porter may have to wait his turn for a Test cap.

The same cannot be said about the batting line-up. Stoneman, James Vince, Moeen Ali and Dawid Malan are all under pressure to perform against Pakistan in the early summer. Questions have even been asked about Cook after an inconsistent 12 months.

Find out how to get into cricket with our inclusive guide.

But is there anyone else really knocking on the door?

If you are looking at runs scored by Englishmen in Division One last season, Stoneman (1,156) topped the list, followed by Surrey team-mate Burns (1,041).

No other Englishman made more than 1,000 runs, although Essex pair Nick Browne and Dan Lawrence and Lancashire's new captain Livingstone all averaged in the mid-to-high 40s with the bat.

Northeast, who joined Hampshire from Kent during the winter, has made more than 1,000 runs over the past three seasons, while Worcestershire's Clarke is seen as one of the country's outstanding young batsmen. His true test will be against Division One bowlers in 2018.

Luke Wells shone for Sussex in Division Two in 2017 with 1,292 runs at an average of almost 65, but he averages less than 38 with the bat in first-class cricket.

Not quite. But umpires will be able to 'send players off' either temporarily or permanently if they misbehave.

It is one of several rule changes coming in for 2018.

Concussion replacements are also available, meaning teams will be able to swap a player who has concussion or a suspected concussion.

The substitute will be eligible to bat and bowl in the game, but the new player must be deemed a "like for like" replacement by match officials.

Other additions made to the laws of cricket by the Marylebone Cricket Club in October include limitation on bat size and a banning of "mock fielding".

In an attempt to balance the contest between bat and ball, bats are now limited to a thickness of 40mm, and a depth of 67mm.

Meanwhile, a "deliberate attempt by a fielder to deceive the batsman" will also incur a five-run penalty.