Ball-tampering. It's been discussed constantly in the past few days - but what does it actually mean?

Australia's Steve Smith and Cameron Bancroft admitted to a pre-meditated plan to tamper with the ball during the third Test against South Africa.

But what is the benefit of tampering with a cricket ball? Cricket analyst Simon Hughes explains.

There are two types of swing. Conventional swing is when a bowler uses the polished side to get the ball to move one way.

With a Kookaburra ball, which is used often in South Africa and Australia, quite often the shine doesn't last very long, which is when bowlers look for reverse swing. 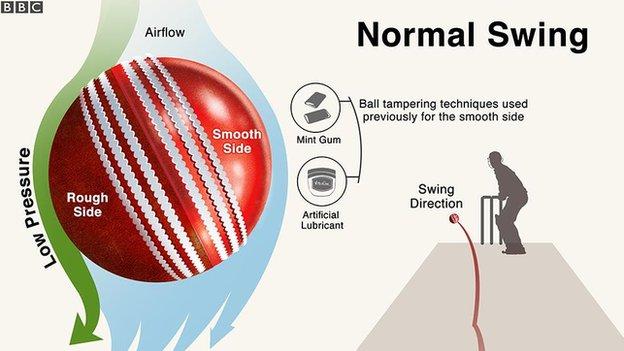 The key to finding reverse swing is to get one side of the ball as pitted and scuffed as possible - and kept scrupulously dry.

This creates extensive turbulence around the rough side, 'forcing' the ball against its natural swing path, which is why it's known as reverse swing. 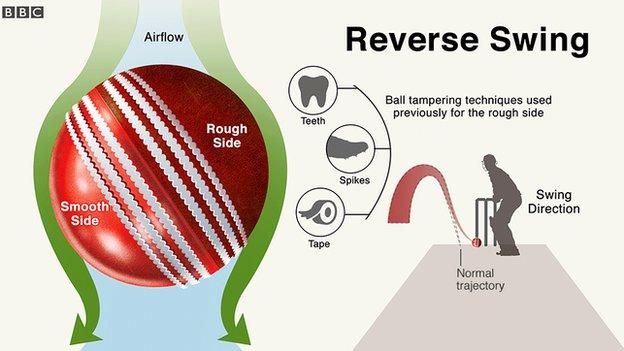 What happens when the ball reverse swings?

Pakistan great Imran Khan was the first person I met who demonstrated to me - in the nets, one might add - how to tamper with the ball.

He got hold of an old ball from the coach's bag, prised up the quarter seam on the rougher side - the quarter seam is the join at right angles to the main seam - and the ball swung like a boomerang.

Occasionally in matches when there was absolutely nothing happening, I tried this - totally against the laws of the game, of course - but nothing happened. Or, if it did, I wasn't good enough to exploit it.

Can a ball be roughed up naturally?

Bowling cross-seam deliveries to land the ball on the leather, or bouncing it in from the boundary, has no guarantee of damaging the same side of the ball.

So, bowlers and fielders are tempted to try illegitimate measures.

This could be accidentally-on-purpose stepping on the ball, scratching it surreptitiously using finger nails, bottle tops, sandpaper stitched into trousers or even, on one occasion, a pen knife.

The best legal method of ball-tampering, when you desperately need wickets? Put on a bad spinner.

A couple of clonks for six into concrete stands would produce just the right sort of damage to the ball that the ailing quick bowlers need. That is, as long as it isn't hit so far that it's lost.

But if a ball gets naturally roughed up, how do you tell if it's been tampered with?

In the late 1990s, when reverse swing with an old ball gained prominence, some bowlers became quite proficient at mimicking or enhancing natural scuffs or scratches on the rough side with their finger or thumb nails.

Provided they didn't get caught, it was very hard to detect the difference between a natural scratch and a man-made one.

I inspected the ball used by Pakistan in the 2006 Oval Test that the umpires examined and declared had been tampered with, which ultimately caused the Test to be abandoned.

I defended the bowlers from any illegal interference - I felt there was no way to be certain that the scratches and striations on the ball were not the natural result of the ball landing on the abrasive Oval surface, and no one had been caught on camera doing anything suspicious.

Would Australia's attempts have worked?

It is hard to see how some soil accumulating on a piece of tape and subtly rubbed on the ball would have any significant effect on the behaviour of the ball.

It certainly wasn't worth the risk, as the Australians have painfully discovered.

Is ball-tampering easy to get away with?

I think Australia were deluded. It is almost impossible to get away with any of this in international cricket now.

There are 30 cameras watching you and umpires regularly inspecting the ball.

There's always been skulduggery in cricket but it's always had this status as a sport where people behave well and respect each other.