You walk into the Waca and the heat hits you straight away. It comes off the hard clay pitch and the white concrete stands and chases you around the unprotected concourses and open banks of plastic seating.

There is minimal protection for those watching the cricket and even less for those playing it. Just the fierce western Australian sun and the sweat and the fear of that pitch in the middle of it all, the fastest, nastiest track an English batsman will ever take guard on.

No other sporting stadium in the world has wrecked as many English dreams as the Waca. In 46 years of Test cricket there, they have played in 13 matches and been defeated nine times.

The solitary win came against an Australia side fatally weakened by the World Series exodus in 1978. Of the past seven Ashes Tests in Perth, Australia have won every one, which hardly bodes well for an England team going into the third Test there - the last in Ashes history - on Thursday already 2-0 down in the series.

The other great stadiums in Aussie cricket have moved with the times. The Gabba lost its dog track and Moreton Bay figs years ago. The Adelaide Oval is now less about the view of St Peter's Cathedral than the punters they can pack into the huge new grandstands. The MCG is a vast uniform bowl, and the green copper Victorian roofs of the Members' and Ladies' pavilions at the SCG are dwarfed by the steel and white fibreglass all around.

The Waca remains implacable, frozen in that period between the stark 1970s and bellicose '80s when sitting out in 42C heat with your top off was considered a good idea, when air conditioning was for executive offices and sun cream for lightweights. Grassy banks square of the wickets for boozy picnics, huge 70 metre-high floodlights all right angles and sharp edges overhead, temporary scaffolding stands on the perimeter like baking trays.

There is no mystery about the place, less an oasis of green in a parched state than a graveyard for England's best. Every visitor knows the tales of the pace and bounce the Waroona clay pitch brings, just as everyone knows you should play the ball late and with soft hands as a batsman and pitch it up more than you think you should as a bowler.

It makes no difference. England go to Perth and England lose in Perth. Even one of the two main stands sounds like a telegram describing an England wicket: Lillee-Marsh End.

The past 25 years have brought eviscerations: defeat by nine wickets; by 329 runs; by seven wickets; an innings and 48; 206 runs; 267 runs. Leaving the stadium in December 2013 a few hours after Australia's 150-run victory had given them an unassailable 3-0 lead in that series, I held a door open for a frail old dear hobbling out behind me. She glanced at my accreditation, worked out my nationality and cackled. "Your blokes are screwed!" She used a stronger word than screwed, too.

That week had seen first the wheels come off England and then the doors. Ryan Harris had dismissed captain Alastair Cook for his first Test golden duck. Graeme Swann was carted for 36 from two overs and retired shortly afterwards. James Anderson was smashed for 28 by Test beginner George Bailey to match the record for the most runs ever conceded from an over in Test cricket.

So vast was the gap between the sides that by one point on the Monday afternoon the chilling statistic emerged that Australia had scored 1,000 more runs in the series than England. I wrote it down, which was necessary because my laptop, along with that of many other journalists, had expired in the extreme heat and was in the drinks fridge awaiting a miracle.

None of us were surprised. In almost every Ashes contest at the Waca there has been a session that has gone beyond sporting tragedy to cruel comedy.

On the previous Ashes tour, a team that had looked impregnable in the first Test and won the second at a glorious canter then reduced Ricky Ponting's Australia to 69-5, only to be blown away by Mitchell Johnson in a summer when everything else he touched turned to mud.

There were three lbws in a row to detonate the top order, including Kevin Pietersen for 0 in the match after he had hit 227; a day later, chasing 391 to win, England were bowled out for just 123, the Waca all bedlam and din in the dusk of the third day when nightwatchman Anderson turned down a single off the penultimate ball and watched his partner Paul Collingwood edge the last to third slip instead.

That was in a series England otherwise dominated. In 2006 they were already two Tests down, Perth relishing its role as the place where the Ashes would be won back, when Adam Gilchrist jogged to the middle after tea on the third day.

He had gone for a duck in the first innings and then failed to score a run from seven of his first nine deliveries that evening, which is the sort of cruel trick the Waca has often played on English bowlers.

Forty-eight balls later he had blasted the second fastest hundred in Test history, hitting 12 fours and four sixes, three of them in one over off Monty Panesar as the weary spinner tossed it up into the Fremantle Doctor, the stiff wind setting the ball up and then chasing it back into the stands behind him again and again.

The curse goes back through the years. In 2002, England conceded a 271-run first innings deficit then slumped to 34-4 in their second innings and lost inside three days. In 1998, they were bowled out for 112 halfway through the first day and Australia were ahead by 38 runs at stumps with seven wickets in hand. 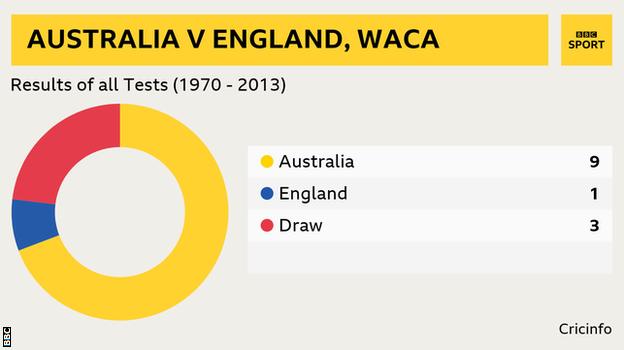 It has always been the iconic fast bowlers providing the execution. In 1995, chasing 453, they were reduced to 27-6 by Craig McDermott and Glenn McGrath, with none of the English top six making double figures as they were sent packing for 123. In 1991, McDermott took 8-97 in their first innings as England were all out for 244 having been 191-2, their last six batsmen making 14 runs between them.

Even the rearguards have had an air of panic about them. There was 41-year-old Colin Cowdrey, called up to the 1974-75 tour after Lillee and Thomson had broken the fingers of John Edrich and Dennis Amiss, taking a fearful battering as he struggled to 22 in two hours of strife.

Eight years later, Chris Tavare took nearly eight hours to make 89, including an entire hour in which he failed to score a single run. In his second innings he took 64 deliveries to score his first.

And those were the good times, Tavare's cavalier nine off 82 deliveries shepherding England to the draw. When the batsmen did come good - Chris Broad, David Gower and Jack Richards all making centuries in December 1986 - it ended in a draw. Even when you're winning at the Waca, you can't win.

There are some beautiful spots for tourists to enjoy around Perth: Rottnest Island, Cottesloe beach, Margaret River a little further south. The Waca late in a beer-soaked day is the antithesis of the welcome that awaits in those places, the point when an Englishman abroad realises he is in the most isolated major city in the world.

The most raucous it got all tour on that disastrous 2013-14 expedition was on the second evening at the Waca, when a full house roared its deafening approval as England slumped from 85-0 to 146-4, Johnson getting rid of Pietersen with a leaping catch at mid-on off Peter Siddle to cap it all.

Because of the time zones it has also been the Test down under that those back home can catch most easily, which is why those evening session disasters make such an impact on the home front; you wake up with hope, you breakfast, as England supporters did in 1995, to the sound on TMS of your team slumping to 27-5.

But this will be the last Test England play at their Ashes necropolis, with the new 60,000-capacity Perth Stadium across the Swan River in Burswood set to be ready for their next tour.

They are unlikely to shed a nostalgic tear, even if the Waca wicket has not been as fast and true as it once was for a while, even as Australia also took pastings there, not least Curtly Ambrose's spell of seven wickets for one run in January 1993.

A friendly town, the cruellest of grounds, a theatre of nightmares.