England tore into the Australia top order late on the third day of the second Ashes Test to give themselves faint hope of a remarkable escape in Adelaide.

James Anderson and Chris Woakes took two wickets each to reduce the home side to 53-4.

That, though, is still a lead of 268 after the tourists were bowled out for 227.

Through a combination of poor strokes, excellent Australian bowling and some even better catching, England slumped from their overnight 29-1 to 142-7.

Respectability was earned by a stand of 66 between Chris Woakes (36) and debutant Craig Overton, who added 41 not out to the three wickets he took in Australia's first innings.

The England batting effort was made all the more lamentable by the way their bowlers performed after the hosts opted not to enforce the follow-on.

England will have to cause more dramatic damage on the fourth day so they are not left with a notional run chase or a rearguard attempt to bat for a draw.

Either will be severely hampered by the likelihood of Australia having two opportunities to bowl in evening sessions under floodlights.

If England are beaten, they will travel to the Waca in Perth, a ground where they have not won since 1978, knowing that defeat would hand the Ashes to Australia.

England arrived at the Adelaide Oval on Monday knowing they needed to get as close to Australia's total as possible.

Instead, James Vince was out to the fourth delivery he faced, the first of four wickets to fall in a morning session that appeared to have put the match beyond the visitors.

When Australia were not being gifted wickets by poor strokes, they created moments of magic - Nathan Lyon and Mitchell Starc both took incredible catches off their own bowling.

It took Overton and Woakes to bravely set an example to the top order, both men withstanding a barrage from the home pacemen.

And, curiously, England's thrilling display with the ball late in the day only served to increase the frustration of their poor first-day effort after Joe Root won the toss and asked Australia to bat.

England were full of the intent they lacked on Saturday, Anderson particularly brilliant in swinging the pink ball under the lights.

Cameron Bancroft was caught behind and Usman Khawaja trapped leg before.

Woakes had David Warner held at second slip and, after Steve Smith successfully overturned being given out lbw to Anderson, he could not avoid a similar fate from the Warwickshire man.

It was wonderful theatre in the Adelaide night but, despite England's late surge, their earlier failings have left them well behind in this match.

England create their own problems

For almost two days, Australia built their large first-innings total through patience, application and occupation of the crease.

It was something England could not replicate.

Of the six men from the top seven to fall on Monday, only Alastair Cook and Dawid Malan can feel like they did not play a part in their own downfall.

Vince's shot, an attempted backfoot drive at Josh Hazlewood in the second over of the day, was woeful, matched by Root's flash at Pat Cummins.

Cook was batting nicely until he edged Lyon to slip to depart for 37, while Malan received a beautiful delivery from Cummins and gloved behind.

Moeen Ali and Jonny Bairstow were the victims of the two brilliant return catches, but both were playing uppishly. Moeen poked at Lyon, Bairstow drove at Starc.

It required the guts and doggedness of Woakes and Overton to drag England towards 200, both standing up to bouncer after bouncer and pouncing on the rare opportunities to score.

Woakes eventually miscued a pull off Starc, with the swift departures of Stuart Broad and Anderson leaving the impressive Overton unbeaten. 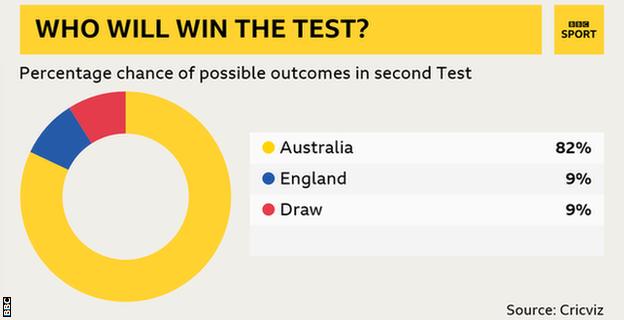 Australia's attack twice ran through England's tail in their 10-wicket first Test victory and here they exhibited the skills that deserted the tourists over the first two days.

When they were not purposely bowling short with the intention to intimidate, their three pacemen bowled the full length that England could not find.

Cummins was especially dangerous with movement off the seam. He and Starc were hostile, while Hazlewood also came close to 90mph.

At the other end, off-spinner Lyon found the turn and bounce that eluded Moeen, while also providing precious control.

The highlights were the catches taken by Lyon and Starc.

First Lyon leapt goalkeeper-style across the pitch to snare Moeen in his left hand with his body almost parallel to the ground.

Then Starc stuck out a right hand to parry Bairstow's drive upwards, taking the rebound with the ball behind him.

Australia got a touch ragged when faced by Woakes and Overton, overdoing the short bowling.

But, after Starc got Woakes with the third caught-and-bowled of the innings, Lyon accounted for Broad and Anderson to end with 4-60.

England all-rounder Chris Woakes, speaking to Test Match Special: "We fought back nicely but are still behind in the game. It is good to see a fightback and we showed good character and put them under pressure.

"We could have had a better day with the bat. We have played a few loose shots as a batting unit. We have to bat for longer periods and make the bowlers come back and bowl three, four or five spells.

"When you build a partnership and work as a pair it gets easier. When you first go to the crease it is tough but it is Ashes cricket - you expect it to be tough."

England's James Anderson: "We're a long way behind in the game so we can't over-attack in the field. We've got an outside chance. We've got a lot of work to do.

"We gave it absolutely everything and we've come away with four wickets, which we're delighted with. We attacked where we could, bowled as full as we could and we got the rewards.

"We've got some very frustrated players in the dressing room. We should have got more runs than we did."

BBC cricket correspondent Jonathan Agnew on Test Match Special: "I am frustrated that England didn't run in like this on the first morning. There has been real intent and energy but they were already over 200 behind."