Joe Root raised a few eyebrows when he called correctly in Adelaide on the first morning of the second Test and asked Australia to bat first.

In doing so, he became the first captain in 25 years to win the toss and field at the Adelaide Oval - and the first in day-night Tests.

'The bowlers let Root down'

I can understand why Root did what he did. He said it was a positive move.

It was clammy, muggy, cloudy overhead and drizzly rain. I could see after all the talking he wanted to hit Australia hard, but the bowlers let him down in the first period.

In a way, we'll never know if it was a good decision or not because they didn't bowl anything like to standard.

It was only a rain break that focused their minds.

As it is, you still feel it's been Australia's day. The thought of facing Pat Cummins and Mitchell Starc in this - it will be tricky.

England's bowling was mixed. It's a two-paced pitch. They bowled too short, especially in the critical first spell.

They got better and I like the look of Craig Overton. He showed no nerves and looked settled. Smith is a great wicket as the first of your Test career. 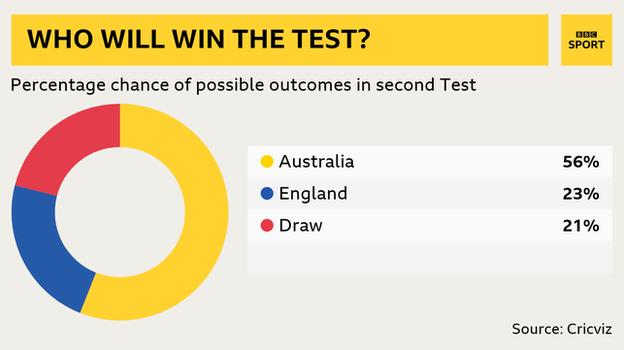 Australia have won the three day-night Tests they have played at home, against New Zealand (2015), South Africa and Pakistan (both 2016).

The average first-innings score in these games is 297, which drops to 231 at the Adelaide Oval (two Tests).

In all first-class floodlit cricket in Australia, the average first-innings score is 286 compared to 327 in regular daytime matches in the same period.

This all means that if Australia pass 300, stats-wise, they are above par.

Can England restrict them in the first session on day two? James Anderson and co won't want to make this list...

Australia captain Steve Smith made just 40 in the first innings here, just days after his marathon 512-minute knock in the first Test, when he made an unbeaten 141.

He was sledged by both Anderson and Stuart Broad during his time at the crease on Saturday, with his all-round game looking a little short of the quality he showed in Brisbane.

So did the plan work?

"I was surprised that Smith engaged in the verbals," said Agnew. "It was clearly England's tactic and he showed in Brisbane he doesn't get sucked into tactics.

"It was clear that was what they were going to do. It was all a bit theatrical when umpire Aleem Dar got between him and Anderson.

"Smith wasn't fluent, he seemed a bit distracted. From England's perspective, they will have settled for getting him for 40.

"It was inevitable it would happen. At the toss, there was not a word between him and Root, they just exchanged teams and that was it.

"At the moment, relations are strained. England really climbed into Smith and it was a shame they weren't that on the money like that when they first came out at the start of the day. It might have made a difference."

Sunday's play will begin 30 minutes earlier at 03:00 GMT to allow the teams to make up the overs lost to rain on Saturday.

So what do England need to do to drag themselves back into the match?

"England can't allow one of Australia's tailenders to hang around with Shaun Marsh, who looked fantastic. They need to get six wickets tomorrow very quickly.

And some words of warning from Agnew: "It seems to me that there is a potential for a match-winning - or match losing - hour in that final session.

"If some of the bowlers get their tails up and come roaring in, there's the potential for a real calamitous session for a batting team."

The view from down under 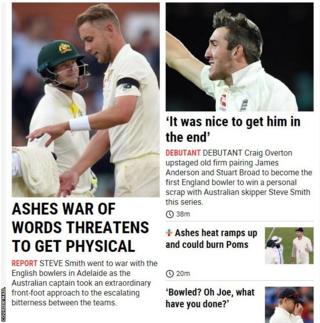