England were frustrated for much of the first day of the second Ashes Test after asking Australia to bat in Adelaide.

Joe Root became the first captain in 25 years to win the toss and field at the Adelaide Oval - and first in day-night Tests - then saw his side manage to take only four wickets.

England did succeed in controlling the home scoring, with Australia closing on 209-4.

But, on a grey, chilly day that was interrupted three times by rain, England's bowlers did not find the assistance they may have expected.

They were met by patient Australian resistance as Usman Khawaja (53), David Warner (47) and Steve Smith (40) all made runs without kicking on.

But every time Australia looked set to take control, they were pegged back, most importantly when captain Smith was bowled to give England debutant Craig Overton his first Test wicket.

Smith had batted for 326 balls and 512 minutes in the hosts' first innings in the first Test, to lay the foundations for his side's 10-wicket victory.

Peter Handscomb (36 not out) and Shaun Marsh (20 not out) will resume when play begins at 03:00 GMT on Sunday, half an hour early in order to make up for the nine overs lost to the weather.

Root's big call on historic day for the Ashes

Given the overcast conditions and expectation the pink ball may misbehave, Root's decision at the toss was not a total surprise, even if it was unusual.

However, his side's performance with the new ball left Root in danger of joining Nasser Hussain at Brisbane in 2002-03 and Ricky Ponting at Edgbaston in 2005 as captains who have made a big mistake in opting to field first.

James Anderson in particular was guilty of bowling too short and Australia were allowed to settle.

Only after the second, 75-minute, rain delay were England energised as Chris Woakes' direct hit accounted for Cameron Bancroft.

From then on, the first day of Ashes cricket under lights and with a pink ball was attritional stuff on a two-paced surface that does not look conducive to free-scoring.

It was played out in front of a crowd of 55,317, the largest for any cricket match at the Adelaide Oval.

The ground looked resplendent under the lights, England fans sung under the iconic old scoreboard and the members socialised at the back of the Sir Donald Bradman Pavilion.

England improve - but could have done better

It was to England's credit that they recovered after such a poor start, but they may be left wondering what might have been had they used the new ball properly.

If there was early movement on offer, the tourists did not bowl in the right areas often enough to find it.

They needed an Australian error to force the first wicket, Warner first calling for a run and then sending Bancroft back, allowing mid-off fielder Woakes to steady himself and hit direct at the non-striker's end.

Stuart Broad led a steady improvement of England's bowlers, but it was the appearance of home captain Smith that really galvanised the tourists.

In the build-up, Root said England would use Smith's laughter at the end of the Brisbane Test as motivation, while Smith called Anderson one of the biggest sledgers in the game.

Both Broad and Anderson engaged Smith in conversation, with umpire Aleem Dar forced to step in on more than one occasion.

It may have had an effect on Smith, who was less fluent and more loose than the unbeaten 141 he made at the Gabba.

Still, it came as a surprise when Overton, who replaced Jake Ball, got the ball on to off stump via Smith's front pad, sparking joyous celebrations.

Australia grind it out

After England's attempts to frustrate Australia in Brisbane, here the hosts were ready to have their scoring curbed by the visitors' plans.

Warner only occasionally broke his patience outside off stump to lace the ball through the covers.

The left-hander was livid when the control left him and he poked Woakes into the gloves of Jonny Bairstow.

Khawaja, perceived to have a problem against off-spin, punished Moeen Ali whenever he dropped short.

Khawaja was dropped at long leg by Mark Stoneman off a top-edged Woakes bouncer, but had added only nine more runs when he sliced Anderson to gully.

Smith almost drove back to Overton on only nine, yet found an ally in Handscomb with similarities in obduracy and unorthodoxy.

Batting deep in the crease, Handscomb was joined by Marsh for an unbroken stand of 48 and it is they who will face a second new ball that is only an over old at the beginning of the second day. 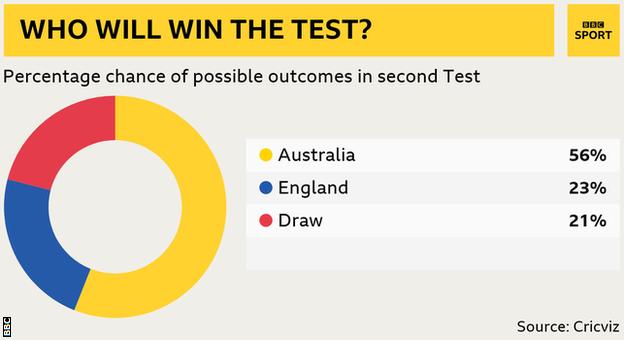