County cricket is over for another year and you have chosen the names you think deserving of a place in the team of the season.

More than 11,500 entries were received and BBC Sport has put together a final XI.

Players unlucky to miss out include Chris Cooke, Nick Browne, Paul Collingwood, Ryan McLaren, Craig Overton and Jack Leach based on the votes their direct rivals for a place in the side received.

But here is the team of the season, as chosen by BBC Sport users. 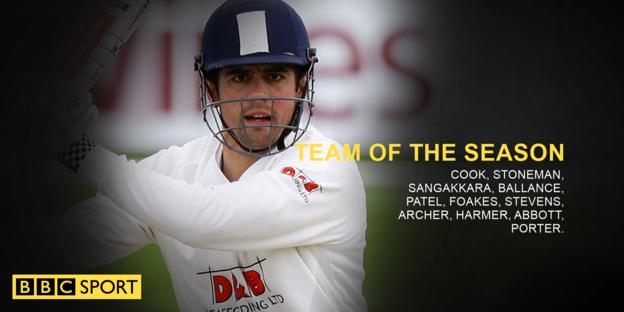 Alastair Cook (Essex) - selected by 70% of users who voted

Having the former England captain available for the first half of the summer was a major plus and his three centuries all came in games which Essex won. They included a superb 193 against 2016 champions Middlesex when he and Nick Browne put on 373 for the first wicket.

Stoneman made the move south from Durham last winter in the hope of furthering his international prospects and his impressive form for Surrey earned him three Test caps against West Indies and a trip to Australia this winter. Made a career-best 197 against Essex, one of very few batsmen to prosper against the new champions.

Words are superfluous, just look at the numbers. The Sri Lankan batting star rounded off his first-class career in style and also scored his 100th century in all formats of the game in Surrey's One-Day Cup quarter-final win over Yorkshire.

Having been elevated to the Yorkshire captaincy, Ballance began the season with scores of 72, 120, 55, 22, 108, 203, the latter a 491-minute marathon to save his side from defeat by Hampshire. His runs total was almost 400 higher than any other Yorkshire batsman in a disappointing season for the Tykes.

Patel played one of the innings of the summer when he made a career-best 257 not out against Gloucestershire in June. He contributed more than 900 runs to Nottinghamshire's promotion campaign and scored more than 1,800 in all formats of the game as they also won the T20 Blast and One-Day Cup.

End-of-season selection for the winter Ashes tour was fitting reward for wicketkeeper Foakes, one of the most consistent performers in the Surrey team. He also topped their batting averages in the One-Day Cup with 96.40.

At the age of 41, Stevens seems to be getting better and better and Kent's ultimate failure to secure a promotion spot was certainly through no lack of effort from him. He took five wickets or more in an innings on seven occasions, including a career-best 8-75 against Leicestershire.

Archer lived up to the promise shown in 2016 with another impressive season in which he also demonstrated his potential with the bat by scoring five fifties. Capable of serious speed when his rhythm is right, he took 7-47 in the early-season encounter with Kent in Hove.

Harmer proved a revelation for Essex in his first season of county cricket, keeping things tight in the first innings and bowling sides out in the second when wickets offered turn. Maybe South Africa were premature in looking elsewhere for a Test spinner. Their loss is very much Essex's gain.

Kyle Abbott was in tears after revealing his decision to quit international cricket and sign a four-year Kolpak deal with Hampshire. But he proved to be everything a club could want from an overseas-born player after taking 7-41 as they beat Yorkshire in their opening Championship match.

The Championship's leading wicket-taker, his contribution to Essex's title win was immense, with barely a single ball wasted in a superb exhibition of Glenn McGrath-like accuracy. Unlucky to miss out on an Ashes tour, if he maintains his form and fitness, a future in international cricket looks inevitable.

BBC users' squad selected based on data until 08:00 BST on Friday 29 September.