England opening batsman Keaton Jennings is to join Lancashire, while his Durham team-mate Graham Onions will also join the county at the start of next season.

Jennings, 25, has agreed a four-year contract while ex-England seamer Onions, 35, has signed a two-year deal.

Jennings scored 112 on his Test debut in India last winter, but lost his place this summer after a run of low scores against South Africa.

Meanwhile, Kyle Jarvis is to return to Zimbabwe to play international cricket.

The fast bowler had been granted permission to be released from his contract with Lancashire, which was due to expire at the end of 2018.

Jarvis, who took 50 first-class wickets in 2015 and 2016 and has taken 37 this season, played eight Tests prior to joining Lancashire as a non-overseas player under the Kolpak ruling in 2013.

Prior to Durham's current game against Worcestershire, Jennings had scored 461 Championship runs this season at an average of 27 - well below his first-class career average of 46.

"It's a fantastic opportunity for me to play Division One cricket at a Test match ground for a club like Lancashire with such a great history and tradition," Jennings said.

"I have been hugely impressed by the vision for the future and playing a part in that alongside some hugely talented individuals and strong leaders."

Durham chairman Sir Ian Botham told the club website: "I have been hugely impressed by his professionalism and courtesy through what has been a very difficult decision for him." 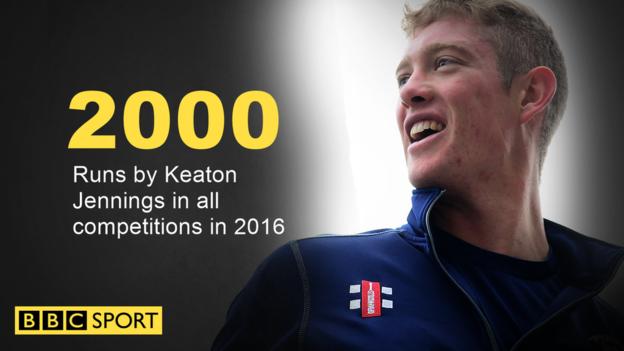 "I am hugely excited at the opportunity to work with head coach Glen Chapple, a fellow pace bowler who I've greatly admired, and join up with Lancashire over the next two years," he said.

"It was an incredibly hard decision to leave Durham, having played there for my whole career and I certainly leave with a heavy heart."

Jarvis added: "I have absolutely loved my time at Lancashire over the last four years. It's a very special place and I have made some fantastic friends here.

"It has been a really hard decision to make to return to Zimbabwe, but the opportunity to return home and play international cricket is something that I really want to do."

Davies has had an excellent season, passing 1,000 first-class runs, while Livingstone is averaging 40 batting at three this year.

How they all fit into the team will be fascinating, whether Davies drops down the order, or Jennings bats at three, remains to be seen.

But considering potential international call-ups for any of those players, Lancashire's top order will still be well covered regardless.