West Indies were beaten by an innings and 209 runs by England at Edgbaston, losing a record 19 wickets in a day.

The entire team, in two attempts, batted for a total of six and a half hours. England opener Alastair Cook managed almost 10 on his own.

To the casual observer, it might have been a surprising margin of defeat.

But, in the words of Test Match Special commentator Fazeer Mohammed: "It was just another day. West Indies are being decimated in a Test in England, like they have been for the past 17 years."

It is natural to compare the current side, who have not won a Test in England since 2000, with great West Indies teams of the past.

The 1980s side that terrified batsmen and bowlers alike was one of a kind. You cannot will a team to be better just because you remember their history fondly.

There are undoubtedly problems in West Indies cricket. But what are they? And how can they be fixed?

Just how poor are West Indies?

Former England opener Geoffrey Boycott described them as the worst Test team he has seen in half a century, while ex-England captain Michael Vaughan believes we may be watching "one of the saddest series for Test cricket".

West Indies are World Twenty20 champions, but their recent Test record leaves plenty to be desired.

Their most recent series victory away from home, against a team other than Bangladesh or Zimbabwe, was in 1995.

At Edgbaston, they scored 305 runs in the match. Cook made 243 in England's only innings.

Although West Indies drew with England at home in 2015, their most recent Test victory away came in 2012 against Bangladesh. They have lost seven of their past 14 Tests on the road by an innings and are eighth in the world rankings.

"West Indies used to do to England what England are doing to them now," Vaughan told BBC Test Match Special.

Earlier this year, West Indies lost a home series to Pakistan when last man Shannon Gabriel, needing to bat out two overs, was bowled via an inside edge as he tried to slog the last ball of the penultimate over.

"I'm so accustomed to this sort of performance now that it's not even funny," said legendary fast bowler Sir Curtly Ambrose, who took 405 wickets in 98 Tests between 1988 and 2000.

Why are they struggling so badly?

The England side at Edgbaston was vastly more experienced, with Cook and bowlers James Anderson and Stuart Broad all having made than 100 Test appearances. West Indies' most-capped player is Kemar Roach, with 38.

"If you are going to produce a Test team, you have four or five senior players to gel junior players," said Vaughan. "This is generally just a load of junior players and it's very, very difficult."

The names that may be more familiar to an English audience - Chris Gayle, Dwayne Bravo and Marlon Samuels - are playing in the Caribbean Premier League, one of the many numerous lucrative Twenty20 competitions that have made Test cricket less appealing in recent years.

The leading players have been involved in a seemingly endless dispute with Cricket West Indies. A tour of India in 2014 was cut short because of a pay dispute, while Bravo last year described the board as "the most unprofessional" in the world.

Shivnarine Chanderpaul, West Indies' most experienced player with 164 Test caps, retired from international cricket in 2016 and is playing for Lancashire, only 90 miles from the scene of the first-Test hammering.

"I still believe that if we had all of our big-name players, our cricket would be better," said Ambrose.

But Mohammed said: "For those saying West Indies wouldn't be in this position with the experienced Gayle and Bravo, or even in the days of Brian Lara, you're conveniently forgetting that West Indies in those days were also being dismissed cheaply against England."

Are there other reasons?

Mohammed, who has covered West Indies cricket since 1987, told BBC Sport: "The West Indies players may be getting a false sense of security from the flat, dead pitches in their home country."

Facilities have also been criticised.

"I went to see the Barbados Under-19s train in April. The conditions and net facilities they were training under were disgraceful," said Vaughan.

But Mohammed said: "If you are going to base the state of West Indies cricket on the facilities, it ignores the fact that when we were the most dominant force in the game, the facilities were even worse."

Asked for the main reason behind West Indies' decline, Mohammed said: "It has to be the management.

"What you have is an administrative structure that seems more aligned to confrontation with the players and a top-down style of management than reaching some sort of compromise.

"Because of the size of our economies, we can't match the numbers being afforded in the Indian Premier League or anywhere else."

Is there still passion for cricket in the Caribbean?

Test cricket worldwide faces a battle to attract fans who are being drawn towards limited-overs cricket. The Caribbean is no exception.

Jamaican sprinters Usain Bolt and Yohan Blake have both spoken of the impact cricket had on them growing up. Bolt was linked with an appearance in Australia's Big Bash competition in 2012, while Blake claimed cricket was his "first love" and that he would consider switching sports.

West Indian cricket has long since had to compete for the attention of youngsters with sports such as football and basketball, and Test cricket was described as dead as far back as 2008.

But Mohammed said: "One of the other misconceptions is that we are losing a lot of our talent to football or American sports.

"There's certainly a pull towards football because players see lucrative opportunities, but there's still a lot of young people - boys and girls - playing cricket in the West Indies."

While supporters remain "passionate", Mohammed said they simply "prefer not to turn up" to see their team lose again.

He added: "People will watch the Caribbean Premier League and will look occasionally at Test cricket or follow it on the radio, but fans have become so disillusioned.

"Losing in three days is nothing new. People are almost switched off from Test cricket, but they will argue all through the night about why things are going wrong."

Why should anyone else care about West Indies? 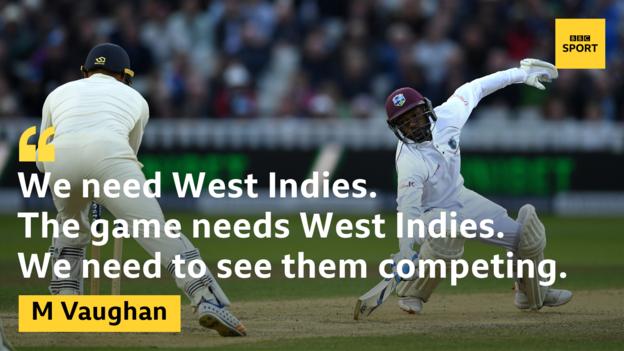 For a generation of cricket fans, watching England face West Indies was done with a mixture of excitement and trepidation. The raw power of their batsmen and bowlers is not easily forgotten.

Vaughan is among those saddened by the decline of West Indies, but England coach Trevor Bayliss said: "West Indies are going through a rough time but 20, 40, 60 years ago there were other teams that were going through rough periods."

Why do West Indies' struggles elicit arguably more sympathy than the plight of Zimbabwe or Bangladesh, for example?

"West Indies cricket is deeply admired and respected in England because of the impact of those great players," said Mohammed. "You can understand why there would be that depth of feeling and that nostalgia.

"But you find yourself repeating the same explanations. Sometimes you step back and ask yourself if you're living in a time warp where you're saying the same thing every three, four, five years.

"This isn't something that has happened last week, last month or two years ago. It's been desperately bad for a long time."

Is there any hope?

The average age of the side beaten at Edgbaston was only 25 - Roach, at 29, was the oldest - and West Indies were missing Gabriel, arguably their quickest bowler, through injury.

All-rounder Roston Chase, who took 4-113 with his off-spin, has scored three centuries and three fifties in his first 11 Tests, while debutant Kyle Hope has impressed for West Indies A and made a century in the warm-up game against Derbyshire.

"There is talent and there continues to be talent emerging in the game," said Mohammed.

BBC cricket correspondent Jonathan Agnew added: "It has to be the long-term goal of coach Stuart Law - and everyone connected with West Indian cricket - for that young talent to be nurtured to a place where they can once again be competitive in Test cricket."

Vaughan said: "They don't really have a coaching programme or any structure to develop coaches. Someone, maybe the International Cricket Council, needs to invest money in facilities and structure.

"This will not be a quick fix but it has to start soon. Let's not let the West Indies drift."