Stuart Broad said he wants to play in the 2019 Ashes against Australia, after passing Sir Ian Botham on the list of England's all-time Test wicket-takers.

Seamer Broad, 31, moved ahead of Botham's 383 wickets in the first-Test win against West Indies at Edgbaston.

He is second only to team-mate James Anderson, who has 492.

"I have a lot of cricket left in me," said Broad. "I'm really enjoying being a part of this team and hopefully have a few more miles in the tank."

Broad, who made his debut in 2007 and has 107 Test caps, claimed his 384th wicket by bowling Shane Dowrich on the third evening.

He finished with 3-34 in the second innings and 5-81 in the match as England took 19 wickets on Saturday to condemn West Indies to defeat inside three days.

Among pace bowlers, only 35-year-old Anderson, with 127 caps, has played more Tests for England than Broad.

"It's hard to look too far ahead," said Nottinghamshire's Broad. "You don't know if you'll have luck with injuries, for example.

"I'll play as long as my competitive spirit and drive is there, because that's what gets me up in the morning. As soon as that goes, I'm gone."

England, who hold the Ashes, travel to Australia for a five-match series that begins in November. The sides meet again in England in 2019.

They play two more Tests against West Indies before the trip down under, and Broad does not want to be rested for the remaining matches at Headingley or Lord's.

"This winter is a hugely exciting one," he said. "The two teams are very similar so it should be a belter.

"I will politely be suggesting that I will be having sufficient rest in September and October to be available for the next two Tests against West Indies." 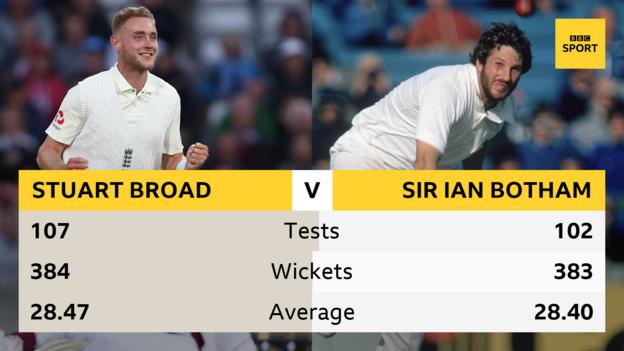 Botham, who watched Broad pass his tally from the Sky Sports commentary box, described it as an "absolutely brilliant" moment.

The legendary all-rounder, an England team-mate of Broad's father Chris, also scored 5,200 runs, including 14 centuries, in a glittering Test career from 1977 to 1992.

"He has been a big influence on me," said Broad.

"He is a huge legend of English cricket and someone who has given a lot back to this team.

"In the past couple of years he has spent more time in the changing room and the guys really listen to him."

The 24-year-old, who bowled six overs at Edgbaston, must have his action tested within 14 days but is still allowed to bowl during that time.

The second Test at Headingley begins on Friday.