Alastair Cook and Joe Root hit centuries as England dominated West Indies on the first day of the inaugural day-night Test in the UK.

Opener Mark Stoneman managed eight on his debut and Tom Westley fell for the same score, but Dawid Malan is 28 not out.

Kemar Roach took two wickets for West Indies, who were poor with the ball and in the field.

Much had been made about how the pink ball would behave, but the tourists did not bowl with enough accuracy to exploit any movement that might have been on offer.

On a true surface, the efforts of England's former and current captain reinforced the fear that this three-match series will be one-sided.

For some time, England's top-order batting has been reliant on Cook and Root, even though both have had problems converting their good scores into centuries.

This match is the 11th in succession in which Root has made a half-century, an England record and one short of AB de Villiers' best for any nation. However, he has made only two centuries in the previous 10.

For Cook, his past 98 Test innings had produced 31 scores in excess of 50, yet just five centuries.

Here, both were untroubled, at times engaging in glorified batting practice against some of the friendliest bowling they will face in Test cricket.

Each man was strong square of the wicket - Root's off-side play typical of the busy right-hander, Cook's cover-driving more unusual and a sign that he is in good touch.

Only when Root played a loose drive at Roach was he bowled, with Cook remaining to see off the second new ball for an entire day - and night - at the crease.

West Indies have not won a series away from home since 2012 and are without a Test victory in England for 17 years.

Bowling is the supposedly their strong suit but, without the pace of the injured Shannon Gabriel, they were impotent and wayward.

Roach did produce a beauty that nipped off the seam to bowl Stoneman, a rare bright spot as the tourists gave England too many opportunities to score - the hosts helped themselves to 53 fours.

The most shambolic passage came under the floodlights and with the second new ball available, theoretically the hardest time to bat in day-night Tests.

Captain Jason Holder opted to delay taking the new ball, bowled three deliveries of the 81st over himself and left the field injured while coach Stuart Law held his head in his hands.

The Windies followed with nine deliveries from off-spinners Roston Chase and Kraigg Brathwaite before a message from the 12th man instructed them to finally take the new ball and employ the pace bowlers.

Two chances wasted, one to be taken?

Stoneman, Westley and Malan are all looking to cement places in the Test side and, with it, solve England's long-standing batting problems.

This West Indies side provide the ideal opportunity to secure a place on the Ashes tour this winter but, for Stoneman and Westley, one chance has been missed.

Stoneman, the 12th man to partner Cook at the top of the order in five years, hit the second and fourth balls he faced for four.

He was then arguably unlucky with dismissal, Roach moving the ball away from the left-hander to clip the top of off stump.

Westley, though, was culpable for his downfall, playing across the line to Miguel Cummins to be plumb lbw on review.

Malan waited for almost 67 overs as Cook and Root piled on the runs and arrived just as the natural light completely faded with the new ball due.

He offered a chance on two - a cut at Brathwaite was not held at slip - but grew in authority for what is his highest score in three Tests to date.

'We didn't find out anything about the pink ball'

Former England captain Michael Vaughan on BBC Test Match Special: "I'm all for innovation - Test match cricket needs to do things to regenerate the crowd - but the product today was poor.

England captain Joe Root: "It's been a great day. It gives us a great position going into tomorrow.

"We've done a lot of hard work and it's all about making it count tomorrow."

Former England batter Ebony Rainford-Brent on TMS: "It was fascinating to see the amount of hype and excitement about the ball, but there's been hardly any movement or seaming around."

West Indies bowling coach Roddy Estwick on Sky Sports: "We discussed that after 80 overs we would need to take the new ball as quickly as possible, but we didn't take it so we had to send a quiet reminder to the captain. It was disappointing." 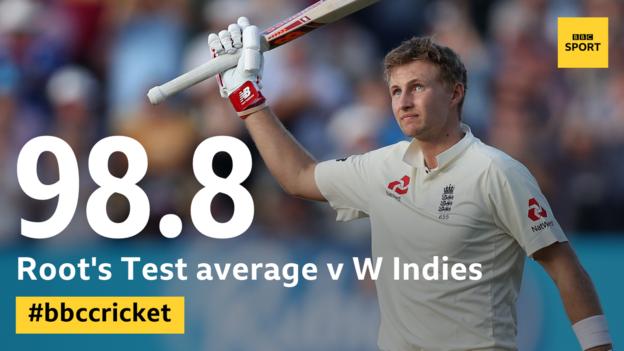