Eighteen days on from England lifting the World Cup at a sold-out Lord's, women's cricket will be back in spotlight.

A crowd of 26,000 packed into the ground for England's dramatic final win over India. More than 1.1 million in the UK tuned in to watch on television - more than the average for a Premier League football match.

Can the momentum and interest be maintained when the 2017 Kia Super League - the only women's professional domestic cricket tournament - begins on Thursday?

Clare Connor, the England and Wales Cricket Board's director of women's cricket, believes the competition is coming at the perfect time for fans and players.

"We have lots of the world's best players involved who have done well in the World Cup," Connor told BBC Sport. "We're lucky this tournament is so soon after, to continue to drive that awareness.

"It's now about trying to harness the enthusiasm that we saw for last month the women and it's down to us now to make the most of that."

Impact of the World Cup 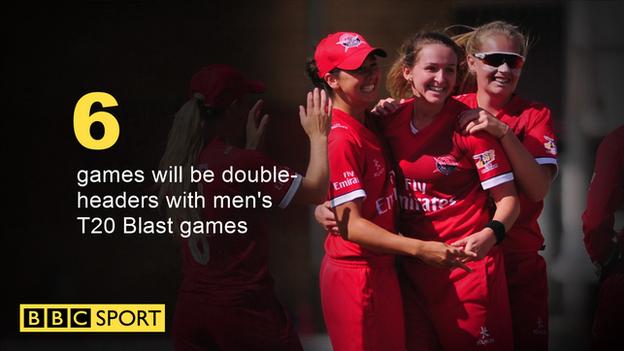 Aside from pulling in record viewing, listening and readership figures, the World Cup drew in good crowds for the majority of games.

India's match against rivals Pakistan sold out at Derby, while England's group game against Australia was watched by more than 3,000 spectators.

There is also a significant overlap in the venues that England played at during the World Cup and those that the six KSL teams are set to feature at, including Taunton, Bristol, Derby and Leicester.

The first six games are double-headers with T20 Blast men's matches and will be shown live on television, along with Finals Day on 1 September, while several fixtures will be broadcast live on BBC Radio 5 live sports extra.

With World Cup final hero Anya Shrubsole, who will miss Western Storm's opening game against Southern Vipers because of a small side strain, player-of-the-tournament Tammy Beaumont and all-rounder Nat Sciver becoming more recognisable names, Connor believes there is no better time for women's cricket to engage with a brand new audience.

"We have the chance, with some of the World Cup performances of the players like Anya, Nat, and Tammy, to build the profile of those players and really connect to the public," said Connor.

"The fact that we won the World Cup puts us in a lovely position to be able to talk to say 'come and see the world champions in action near you'.

"They have got that visibility now after getting incredible coverage and our marketing team are working hard to try to communicate to those fans and match the enthusiasm with which everyone got behind the World Cup."

Charlotte Edwards put behind the disappointment of losing the England captaincy and retiring from international duty to lead Southern Vipers to the inaugural KSL title in 2016, with a seven-wicket win over Heather Knight's Western Storm.

Dubbed the 'mum's army' by members of their team, their squad containing some experienced former England players, the Vipers won five of their six matches en route to the title.

All-rounder Arran Brindle showed she could still turn out for the national side, ending unbeaten in all four of her innings, making a high score of 45, and taking five wickets.

With the experience of New Zealand skipper Suzie Bates, Edwards, Brindle, as well as West Indies hard-hitter Hayley Matthews joining from Lancashire Thunder, the Vipers will be confident of defending their trophy.

Their team boasts three of the World Cup winners' best performers - Sciver, Beaumont and spinner Alex Hartley - along with South African pair Marizanne Kapp - one of the fastest bowlers in the world - and big-hitting Lizelle Lee.

Despite Lancashire Thunder ending last season bottom of the table with only one win, their chances are improved by having England wicketkeeper Sarah Taylor back among the ranks following her break from the game because of her struggles with anxiety.

Following a successful World Cup campaign in which she starred with the bat and excelled with the gloves, Taylor has strengthened a Thunder team which also features Australia all-rounder Jess Jonassen and New Zealand's power-hitter Amy Satterthwaite.

Chamari Atapattu (Yorkshire Diamonds): The Sri Lanka opener lit up the World Cup with a sensational unbeaten 178 against Australia, an innings that included 22 fours and six huge maximums at Bristol. Atapattu is also the first player from a South Asian team to play in the KSL.

Ellyse Perry (Loughborough Lightning): Regarded as one of the best all-rounders in world, Australia's Perry is formidable opening the bowling and batting at three. The 26-year-old was Lightning's top-scorer last season and led them to Finals Day.

Tammy Beaumont (Surrey Stars): After undergoing an incredible transformation over the past 18 months, Beaumont provides a steady head at the top of the order, with the type of explosive attacking flair that takes most teams by surprise.

Arran Brindle (Southern Vipers): The former England player impressed on her return to professional cricket in last year's tournament, offering middle-order power and the spin to surprise some of the world's best batters.

Sarah Taylor (Lancashire Thunder): The England wicketkeeper announced herself back on the big stage with a sensational century against South Africa in the World Cup and is tipped to excel in her first Super League season.

Stafanie Taylor (Western Storm): The West Indies all-rounder was in superb form for the runners-up in the inaugural Super League... 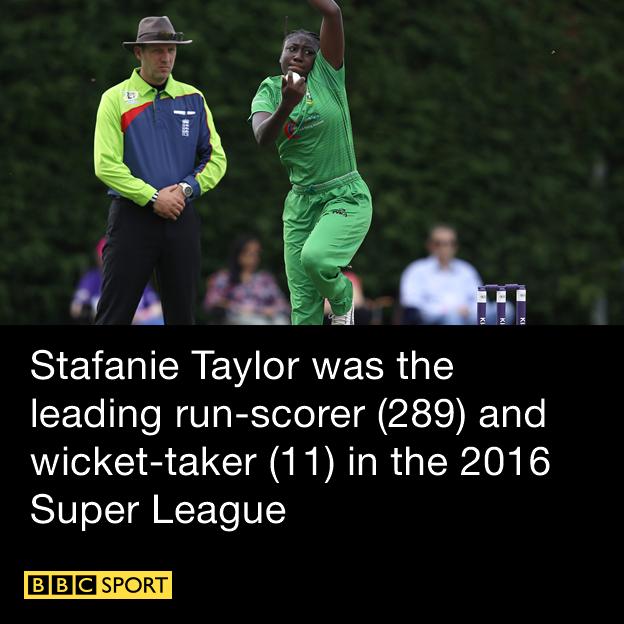 Danielle Hazell (Lancashire Thunder): "It is about being one step ahead of the game, it is such a short game that you've got to get on the front foot from the first ball. We're being thrown into the fire with the Roses match first up, I will try to keep myself in the ring and not too close to the boundary."

Amy Jones (Loughborough Lightning): "This tournament is the biggest thing for me this summer. I've been working very hard over the last few months to nail on my game plans for the Super League. It's a good opportunity for me to play in a competitive tournament and get my name back into the mix for the Ashes."

Tammy Beaumont (Surrey Stars): "We've got probably the freshest bowler coming in, Rene Farrell. She was really good for us and the domestic girls have seen what they have to do, they're the ones that are going to get us over the line this year. We had a great vibe last year, even if we didn't always put it onto the pitch."

Tash Farrant (Southern Vipers): "I was disappointed not to get selected for the World Cup but the Super League will be great for me, especially being involved in T20 stuff. This is the tournament to show what you can do."

Heather Knight (Western Storm): "It's quite a short, sharp tournament, so you've really got to hit peak form, and we are hoping that will be the case. We were probably a little bit batting-heavy last year so that's why with the overseas player we've gone for Holly Huddlestone, a bit more firepower and good bowling at the death as well."

You can listen to ball-by-ball commentary of Southern Vipers v Western Storm on BBC Radio 5 live sports extra and online from 14:15 BST on Thursday.