The hosts beat the Proteas by 177 runs at Old Trafford on Monday, sealing a 3-1 series win.

England play Australia in the first of five Tests in Brisbane on 23 November.

"If you have assistance and skill, which England's bowlers have, you can target Australia's batting line-up," said Du Plessis, who captained his side to a series win down under last winter.

"They are relentless and our batting line-up wasn't strong enough for them," the South African told Test Match Special.

"Australia have fiery and quick batsmen so England will need to get through them."

But he added: "I think England could be Ashes winners. They have a balanced team."

'Anything would have been possible'

Du Plessis scored 61 in the fourth innings against England as South Africa looked to chase down 380.

The captain joined Hashim Amla at the crease with his side struggling at 40-3, before the two batsman gave the tourists some hope by sharing a 123-run partnership.

"When Hashim and myself were batting I thought we could get to the second new ball, which would have been tough," said Du Plessis.

"Then anything would have been possible.

"But to lose Hashim and then the cluster of wickets was disappointing."

'We are not the finished article' 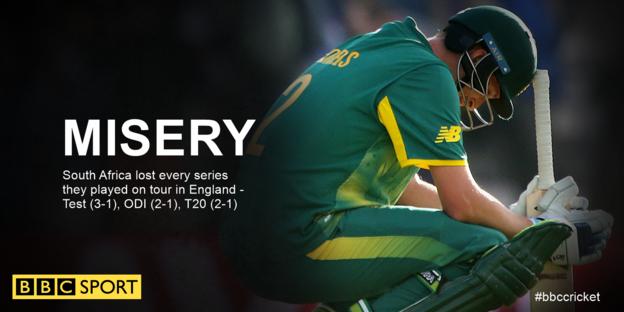 The loss brings to an end a disappointing summer for South Africa, having lost series' against England in all three formats of the game.

They also failed to qualify out of the group stages in the Champions Trophy.