English cricket takes a step into the dark on Thursday with the first day-night Test played in the country as Joe Root's side face West Indies at Edgbaston.

The opening game of a three-match series will be only the fifth Test anywhere to be played under the day-night format since Australia and New Zealand contested the first in Adelaide in November 2015.

The late start, finish and pink ball are still novelties in the five-day form of the game - but can we expect to see more floodlit matches as Tests fight to stay relevant in a cricketing era increasingly in thrall to the quick hits of Twenty20?

Why is this day-night Test happening now?

While Test cricket is a tough sell in other parts of the world, England can still largely pack out grounds for the longer format. But with one of this winter's five Ashes Tests to be played at night in Adelaide, and aware of the need to appeal to a wider audience, the England and Wales Cricket Board (ECB) felt compelled to switch on the lights.

"It was first mooted by [ECB director of cricket] Andrew Strauss who was looking ahead to the Ashes this winter," Warwickshire chief executive Neil Snowball told BBC Sport.

"Initially it came from a performance point of view - 'do we, England, want to play the first Test match we've played under lights in the Ashes?' I think the view was 'no, we'd like to have a go before that'.

"We were cautious to start with - I'll be honest - because we've done 49 Tests and we sell Test cricket very well.

"But then the more we looked at, we thought: 'Well, actually, we are innovative, it will be a first and it should be good for Edgbaston.'

"Strauss and I sat in here at Edgbaston having a cup of tea watching the cricket last summer and decided, 'should we go for it or not?' We said, 'yes, let's do it'. I'm delighted that we have."

And, a few weeks out from the match, over 40% had been purchased by first-time buyers for Edgbaston Tests, suggesting that work-friendly hours and the prospect of witnessing history has broadened the appeal of a game against a mediocre West Indies side.

But haven't we been playing day-night cricket for years already?

While floodlit limited-overs cricket has been hugely popular in Australia since the late 1970s, it is only 20 years since the first English county day-night match was staged - when Warwickshire played Somerset at Edgbaston on Wednesday, 23 July 1997, when the old 40-over Sunday League was experimenting with games on other days of the week.

A crowd of 15,174 was a revelation for a humdrum fixture and the hosts won by 35 runs in a match that finished at 23:38 BST. Other counties quickly followed suit, and within six years the original Twenty20 Cup - played largely in evenings - was launched with immediate success.

Floodlit cricket has developed more slowly at Test and first-class level. The annual pre-season champion county v MCC match has been played on a day-night basis in Abu Dhabi since 2010, while a four-day match between Kent and Glamorgan was staged in 2011 before a round of County Championship fixtures in June for which all fit England players were made available.

What will be different to a 'normal' Test?

Unlike Australia, where the first break is 20 minutes and second 40 minutes because of the twilight, this match will maintain the 40-minute lunch break - albeit a very late one at 16:00 - and 20-minute tea break.

To complement the occasion and opposition, Warwickshire have installed a beach area behind the RES Wyatt Stand and a rum shack, while rosé, pink champagne and pink cocktails will be sold.

The colour of those drinks is to fit with the other most noticeable change - the pink ball. With the players wearing traditional whites, the white ball used in limited-overs cricket was never an option as it would be 'lost' in their clothing.

After extensive testing, the ECB believes the pink Dukes ball is the closest in form and feel to the traditional red one used in first-class and Test cricket. But it has received a mixed response so far, with suggestions it goes soft too soon and moves significantly off the pitch, making batting difficult when the lights come on.

'Awesome fun' - what is it like to play a day-night Test?

Australia batsman Peter Handscomb made his Test debut in the day-night meeting with South Africa in Adelaide last November, while his second appearance was in another day-nighter, against Pakistan in Brisbane the following month.

Scores of 54, one not out, 105 and an unbeaten 35 in those matches suggest he thrives in the format and the 26-year-old, who played for Yorkshire this season until returning home at the end of July, says the experience of playing in front of larger and livelier crowds at night was "awesome fun".

On the first day of his debut, South Africa declared at nine wickets down to bowl at Australia in the supposedly trickier-for-batting night conditions - but Handscomb believes the England and West Indies players will not need to change tactics too much.

"We've been playing with the pink ball in Australia for four or five years, so it wasn't something completely foreign to me," he told BBC Sport.

"My feeling was that when the lights come on, all it does is liven up the grass on the wicket. How much the ball will react depends on how much grass is on the wicket.

"If there is a bit more grass on the wicket, the night-time conditions will come into play. If there is not a lot of grass on it, it's actually quite nice to bat against the pink ball under lights.

"A brand new pink ball is going to swing. The change in conditions just changes the wicket a little bit. You get a bit more seam movement and pace off the wicket. That can often be tough to face."

So the pink ball doesn't make much difference?

Well, that depends on who you ask. ECB head of cricket operations Alan Fordham says the pink ball is the "most crucial factor" in playing a day-night first-class match.

He admits the ECB has had "limited opportunity to work on the pink ball, get it out in the field, get robust thoughts and data around it because we've played so little of it".

The ex-Northamptonshire opener told BBC Sport: "I've always said that if you expect the pink ball to play in the same way as the red ball, you'll be forever disappointed. It is manufactured in the same way as a white ball and we know those balls do play differently.

"You can't get much of a shine on a pink ball so bowlers are having to think differently about how they are going to take their wickets. Perhaps for batsmen, a bit of patience might pay off. It wouldn't swing for as long as a red ball, I suspect, because you can't keep that shine on it.

"We had some feedback from the spin bowlers saying they thought it was a good ball for them to be bowling with - it's different but neither better nor worse than a red ball."

Fordham says June's County Championship pink-ball fixtures provided encouragement that the "balance between bat and ball wasn't affected" as the run-rates in the previous round of matches, and one at the same time of year in 2016, "were almost identical".

He added: "There was some reasonably consistent feedback that the ball went softer a little bit too early. Maybe that is the case, maybe that is not the case - maybe it's some perception.

"If we can address some of those comments and remove that feeling that the ball is going soft, then we ought to look at that for sure. Maybe a different shade of pink might be slightly better."

What do the players think?

After practising under the Edgbaston lights on Monday, England all-rounder Moeen Ali - man of the series in the recent victory over South Africa - acknowledged that the pink ball is "different".

He added: "It feels lighter off the bat. Sometimes you don't feel like you've hit it and it goes; other times you've nailed it and it doesn't. But you get used to it. I did by the end of the session."

Durham all-rounder Paul Collingwood, who played 68 Tests for England between 2003 and 2011, was less positive after making 25 off the pink ball in a rain-affected draw against Worcestershire in June. He described it as "shocking" and "like plastic when you hit it", while Handscomb believes the Dukes ball goes softer sooner than the Kookaburra that will be preferred for December's Ashes Adelaide Test.

Another concern was visibility for fielders on the boundary and spectators. "Sometimes you can lose it a little bit if you're out on the boundary, but it can happen with the red ball as well," said Handscomb.

Hampshire captain George Bailey, who has played five Tests for Australia, is not a fan. "The one thing I've said back home that I continue to repeat, is that I don't think the [pink] ball is the same quality as a red ball," he said.

Warwickshire coach Ashley Giles said that on day one of the day-night match against Lancashire in June there were "a couple of incidents where guys were not sure where the ball had gone". The watching Fordham had a similar experience "from square on" but believes the "murky" conditions were largely responsible and felt that "the pink ball allowed play to continue". He reported no problems when attending day four of the Essex-Middlesex game at Chelmsford with brighter skies.

Can we expect to see more day-night Tests in the future?

Yes. Cricket Australia is delighted that the floodlit Adelaide Tests have quickly become an occasion, while confirmation is expected soon that England will play a day-night match against New Zealand at Auckland's Eden Park in March.

Handscomb believes one day-night Test per series is the right balance. "Red-ball cricket should still be taking priority. There should be more red-ball games than pink-ball games because ultimately that is Test cricket and that's what we've known," he said.

Fordham added that there is a need to "keep people prepared if day-night Test cricket in other parts of the world is going to be a regular feature", which means an annual round of pink-ball County Championship fixtures could well become the norm.

A day-night Test is unlikely to happen in England next year because India and Pakistan are touring and later starts would not suit live television coverage in Asia. Australia are due for an Ashes series in 2019 - which is almost guaranteed to sell out everywhere - so it may be 2020 before it happens again.

But before the first ball at Edgbaston is bowled, the initial signs are positive with Fordham describing ticket sales as "fantastic", adding: "It's got more people watching cricket, which is critical."

Warwickshire's Snowball added: "The other grounds have been very impressed with the sales that we have had here, so they will be looking at it with great interest as to whether it might be something that might catch on."

What needs to happen for Fordham and the ECB to consider the match a success?

"A good game of cricket that is bound to be played slightly differently because the change of the ball is significant - as long as there is a good balance that allows all disciplines to excel at some point in the game."

But perhaps we won't know the full answer to the question until after the Ashes Test under the Adelaide lights in December. 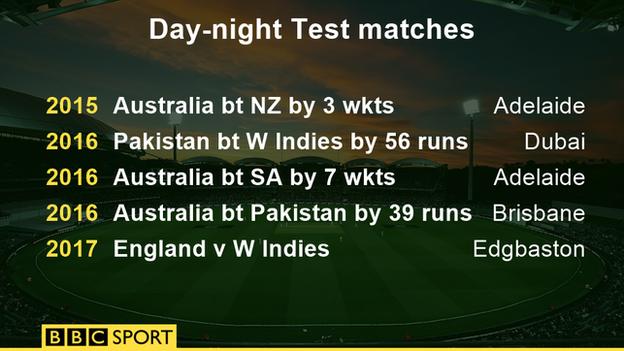