Alex Blake's stunning 46-ball hundred for Kent was in vain as Peter Trego helped Somerset to a four-wicket One-Day Cup win with his own fine century.

Despite losing opener Steven Davies for a third-consecutive duck in the competition, Trego, Dean Elgar (55) and Hildreth made sure Somerset were always up with the required run-rate of more than seven an over.

They have now won their opening three matches in the cup, although victory looked unlikely after 28-year-old Blake had bludgeoned their bowlers around the ground to bring up one of the fastest List A centuries in history.

Blake smeared several maximums over mid-wicket, reaching his hundred after less than an hour at the crease, before he was caught by Trego on the long-off boundary.

However, by the time Trego himself was dismissed by James Tredwell, having shared century stands with Elgar and Hildreth, Somerset needed just 49 to win off 49 balls with five wickets in hand. 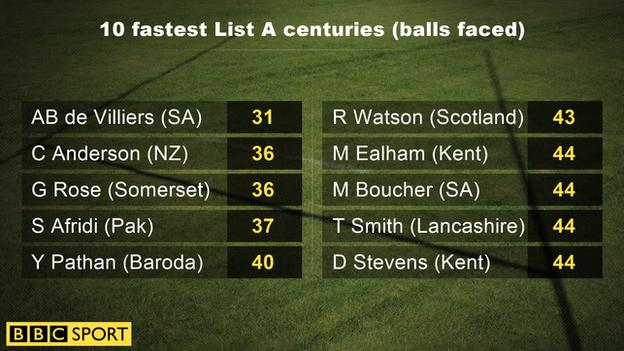