With England's 2016 fixtures completed, captain Heather Knight is heading to Australia, and another season leading Hobart Hurricanes in the Women's Big Bash League.

After a year which included so much change and so many firsts for us as a team, it felt strangely appropriate that our final international outing of 2016 ended with another first for us all - a one-day international spread over two days in Colombo because of rain, which we won to secure a 4-0 series victory against Sri Lanka.

A lot has happened in the past 12 months, and it's been a bit of a crazy year to be honest! Having taken over as England captain in June, the past five months have been some of my most enjoyable and rewarding in an England shirt.

There's no doubt that it's been challenging along the way, but I'm really enjoying leading this team. As a group we feel like we've come a long way in the past year and a lot of credit has to go to our head coach Mark Robinson and assistant coach Ali Maiden for that.

'I'm learning as a leader'

Alongside the England captaincy, I've also led Hobart Hurricanes, Western Storm and Berkshire in the past 12 months, so I've certainly had to manage a broad range of different people - from county players who have never played in front of a decent crowd before, to established overseas international players, and England team-mates who have won more than 100 caps.

That is sometimes one of the hardest things to get right as a captain - knowing what to say and when to say it, to try to get the best out of those different characters on the pitch. It's not an exact science, but I feel like I'm learning and growing as a leader all of the time.

I know that as soon as I stop trying to do that, I'll be in trouble, so I'll always be looking at ways I can get better. That's an attitude I've always had with my cricket, so I don't see why captaincy should be any different.

Why a hamstring injury turned me into a spinner

During the second ODI against Sri Lanka earlier this month, I had a bit of a slip when I was batting and aggravated an old hamstring tendon injury, which unfortunately forced me to sit on the sidelines for the third match.

Although I'm generally dreadful at watching, and always want to be involved, the girls did a brilliant job and, in my absence, they were skippered to a comfortable win by Danielle Hazell.

The old hamstring injury was actually the reason I started bowling off-spin in 2014, as I was no longer able to send down my (very average) 'dibbly dobbly' seamers in the nets. So something good came out of four months on the sidelines at least!

I was quite surprised to be told that, at the conclusion of the ICC Women's Championship last week, I had finished as the second highest wicket-taker in the competition. I think a lot of those wickets have probably come down to the bowlers at the other end, but I'm proud of a good couple of years with the ball all the same.

I think I'll always see myself as a batter who bowls a few tweakers, but it's nice to be able to contribute to the team in another way. I'm definitely glad I decided to go down the spinner's route following my injury and with a bit of encouragement from our former spin coach Carl Crowe.

Looking ahead to an even bigger year

After about 10 days at home, I'll be heading off to Australia for the Women's Big Bash League - along with a number of my England team-mates - and rejoining the Hobart Hurricanes.

After a good season with the 'Canes last year, I'm massively excited to meet up with the team again and see what the second edition of the WBBL holds.

Also, as an England team, we can now start looking forward to next summer's ICC Women's World Cup. As a player I don't think there is anything more exciting than getting the chance to play in a World Cup on home soil.

I keep saying it, but it is so true, we have the best women's cricket supporters in the world, so hopefully we will get to play in front of some passionate home fans throughout the tournament next year.

As a West Country girl, it's great that two of the group-stage venues - Taunton and Bristol - are in this part of the country. We are also looking forward to playing at Derby and Leicester, and with a bit of luck and some good performances, at Lord's in the final on 23 July!

You can read more BBC columns from Heather during the winter. 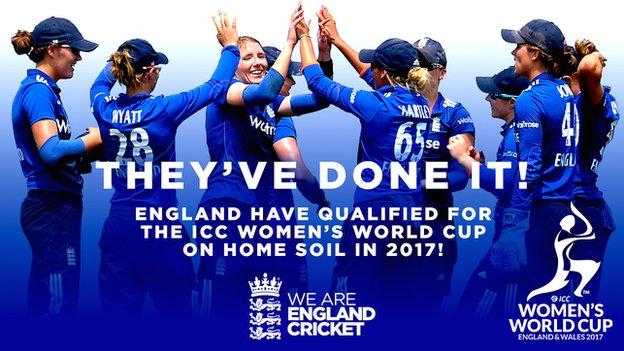