Chasing 149, England were coasting at 107-4 before Nat Sciver holed out off Afy Fletcher.

Deandra Dottin took three wickets in an over, then trapped Amy Jones lbw to bowl out England for 110.

The third game of the five-match series is at Sabina Park on Friday at 15:30 BST.

It is the nature of the defeat that will be most disappointing to England, who now travel to Kingston level at 1-1.

Playing on the same slow surface on which they won the first ODI by five runs, the visitors were sensibly managing a pursuit of a reachable target.

But captain Heather Knight top-edged leg-spinner Fletcher to short fine leg for 26 with the score on 93, then Sciver patted a tame catch to cover to depart for 27.

Dottin blew away the tail and, in the blink of an eye, West Indies were celebrating victory. 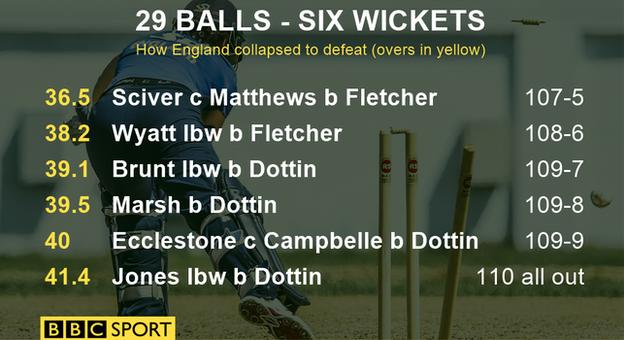 England looked to have learned the lessons of the first ODI, when they slipped to 62-5 before being rescued by Danielle Wyatt.

Knight and Sciver in particular manoeuvred the ball well, ran hard and looked to have sucked the life out of the home side.

But, two poor shots later, followed by a dubious lbw decision in favour of Fletcher against Wyatt, and the England lower order were exposed.

The all-rounder could not complete a hat-trick, but still had the honour of pinning Jones to seal the win.

Defeat will be even harder to take for the tourists after another excellent bowling display on a stiflingly hot morning in Jamaica.

It was the spinners who once more did the bulk of the work for England, left-armer Hartley's straight line ripping through the home middle order.

Taylor, strong through the off side, stood firm, sharing stands of 47 with Dottin and 34 with Stacy-Ann King.

After King was brilliantly stumped off Brunt, it began a slump in which West Indies lost their last five wickets for 24 runs.

Still, they already had enough.

'We have to find a way to keep Dottin out'

England spinner Laura Marsh, who took 1-23 from 10 overs, told BBC Sport: "Dottin came on and had a magnificent spell. It's unfortunate really. We played really well for the first half but credit goes to Dottin because she's won the game for them.

"We put ourselves in a brilliant position, the bowlers did a great job. We fancied chasing that score so we're pretty disappointed.

"She was bowling full and quick. We have to find a way to keep her out. We'll go back and look at how we got out and come back with a better plan."