Middlesex captain James Franklin stood by the contrived declaration which helped his side beat Yorkshire at Lord's and win the County Championship.

With the winners taking the title and a draw making Somerset champions, Yorkshire were set 240 off 40 overs after discussions between the captains.

Middlesex slogged 120 off 8.5 overs and then bowled Yorkshire out for 178.

"Both teams felt we owed it to the occasion to try to make a good game of it," Franklin told BBC Sport.

Somerset, who were top of the table at the start of Friday's play after beating relegated Nottinghamshire inside three days, needed their two title rivals to draw to win the County Championship for the first time.

And the decision to set up a Yorkshire run chase meant the title winners were likely to come from the game at Lord's, with Somerset watching on helplessly on television at Taunton.

Somerset opener Marcus Trescothick told Sky Sports: "Both teams wanted to win and you can understand it - they're going to try to win at all costs.

"We're all pretty disappointed because it was heading in a certain direction. It's fairly tough."

The decision to allow the hosts to score quickly before declaring was criticised by some, but Franklin said both teams put everything on the line to go for victory.

The 35-year-old said: "We were still under the pump going into Friday's play but Nick Gubbins (93) and Dawid Malan (116) batted beautifully and forced the hand to start discussions.

"To have the best chance of winning, there would have to be a bit of give and take and each side had to be prepared to lose.

"I take my hat off to Yorkshire for committing to that because we were committed to it. If [Yorkshire captain] Andrew Gale was holding the trophy now, our guys would have walked off with their heads held high. We're very fortunate that we are on the winning side."

'It's what I have dreamed of since I joined'

Toby Roland-Jones wrapped up Middlesex's first title success for 23 years with a hat-trick.

He was part of the side which inflicted Yorkshire's only defeat of 2015 but it was not enough to stop them from winning a second successive Division One crown, with Middlesex finishing second.

"We said to ourselves we didn't want to watch them lift the trophy at Lord's again this year when we played them here for the last game," said the 28-year-old seamer.

"Winning in the manner we did is an unreal feeling, it's what I have dreamed of since I joined the club." 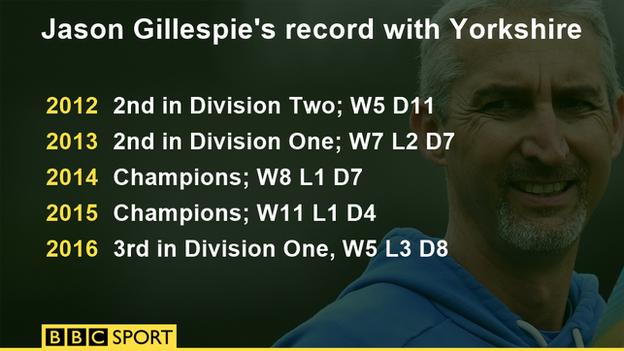 Yorkshire were unable to give head coach Jason Gillespie a victorious send-off - he is leaving the club after five years in charge to return to his native Australia.

The former Australia paceman led Yorkshire to promotion from Division Two in 2012 and back-to-back Division One titles in 2014 and 2015.

"I'm very disappointed to lose the game, but I am incredibly proud of our players," Gillespie said.

"I'm going to miss them a huge amount and I'm no longer a coach, but a Yorkshire supporter now."

Meanwhile, Yorkshire skipper Gale said it was an achievement to have still been in contention on the final day.

Batsman Gale managed just 525 runs at an average of 21 this season, with his side's top order in particular failing to fire on a number of occasions.

"We probably haven't played our best cricket but to take it to the last hour of the season is incredible," he said.

"I'm disappointed not to get over the line. I thought 240 was maybe a few too many but a longer chase would be better for us.

"We just needed one man to make 100 but it wasn't to be and I'm gutted that I can't send Gillespie out with a trophy."