The inaugural Women's Super League is set for a big finish on Sunday, with the first winners of the Twenty20 competition set to be decided at Finals Day.

Southern Vipers have already reached the decider at Chelmsford and will find out who their opponents will be earlier in the day, following the semi-final between Western Storm and Loughborough Lightning.

There have been impressive turnouts throughout the competition, with more than 15,000 spectators attending the 15 group games, and a peak crowd of 2,200 turning up at Southampton on the first weekend.

BBC Sport looks at how each of the teams have performed so far and some of the players to watch on Finals Day.

How the teams reached Finals Day

Southern Vipers - topped the group with 11 points from five matches

Led by former England captain Charlotte Edwards, the Vipers were dominant through the group stages, losing no more than than four wickets in any of their games.

Undefeated at their home venue of the Ageas Bowl, picking up three bonus-point wins in the process, Arran Brindle is the only top-order batter to have remained unbeaten in all four of her innings so far.

The Vipers' thumping 59-run victory over Loughborough Lightning in the final group match ensured an easy passage through to the final.

England strike bowler Anya Shrubsole bowled Storm to second spot as she took tournament-best figures of 5-23 in the final group game against Yorkshire Diamonds, including finishing with a four-wicket maiden.

Skipper Heather Knight was the only bowler in the group stages who bowled her full allocation of 20 overs, while the Storm's only loss of the competition came against their semi-final opponents Loughborough Lightning.

The team posted the third highest total in the group stages, as they pulled off an unlikely and thrilling final-over victory over Surrey Stars in their third match, when they looked to have been heading towards a second successive defeat

Boasting three of the top six highest totals in the Super League group stages, Lightning lit up the competition as they smashed 72 boundaries at Haslegrave.

Sussex batter Paige Scholfield boasts the second-highest strike rate at 155.26, with her 69-run eighth-wicket stand with Thea Brookes off just 38 balls almost firing her side to an outlandish victory over Lancashire Thunder.

Despite losing their final group game to the Vipers, Lightning won three of their five games to finish third, earning them the opportunity to have a second bite of the cherry to reach the final.

The stars on show at Chelmsford 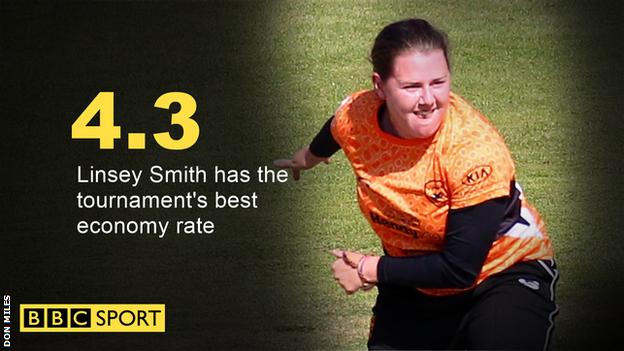 Spinner Smith has made a name for herself during the group stages and along with having the best average (8.12) and strike rate (11.2), the 21-year-old is joint leading wicket taker with eight scalps. 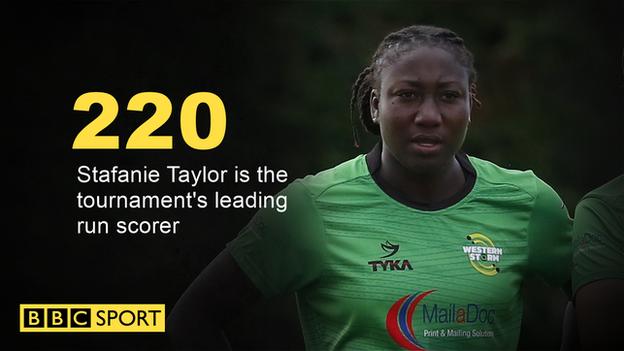 The West Indies captain sparked into life after a slow start to tournament with the bat, hitting back-to-back unbeaten half-centuries to propel her side to three consecutive victories.

Having hit 61.8% of her runs in boundaries, smashing 22 fours and eight sixes so far, the all-rounder has contributed well with the ball too, having taken eight wickets. 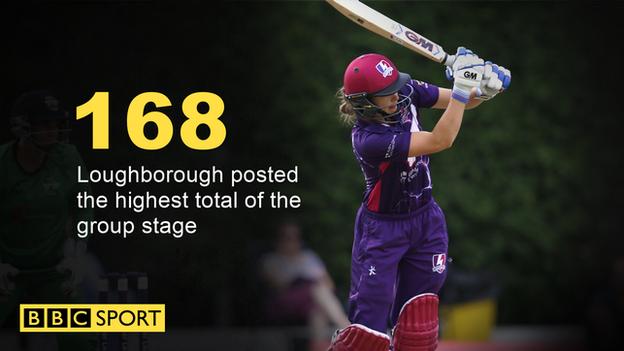 An all-round team effort from Loughborough Lightning saw plenty of impressive contributions, including a magnificent innings from England wicketkeeper Jones.

Having been starved of the opportunity with the bat during the recent international series against Pakistan, Jones' 46 off 30 balls helped Lightning pull off a five-run win over Storm.

"You set out to win any competition you play in and to be one step away from winning the Super League is a good position.

"We have the semi-final to look at and see how the wicket plays, but we're just looking forward to three o'clock on Sunday.

"If you ask all three teams, everyone would want to be in our position. As quite an older team, it was always an incentive to play just one game on the day.

"I'm not sure how much of the semi-final we will watch. We have to focus on ourselves, as neither team will be surprising us with anything because we've already played them.

"We won't stop the girls from going down early. For us it's all about peaking at the right time on Sunday and how each individual does that in our team is up to them.

"It's important for the senior players to look and be relaxed so the younger players in the team feed off that and treat the final just like any other match."

"Playing the semi-final will give whoever is going into the final a bit of an advantage, having seen the pitch and being able to work their game plans around the conditions.

"Our last game against Loughborough was a really close game, we have plans in place for their players and we'll look to make the result different this time.

"I don't think we put in our best bowling performance against them and I think our bowling is the one thing that has improved throughout the competition.

"It will be massive for our younger players. Before this competition they had never played in front of such large crowds and the occasion of playing in a Finals Day is really exciting for them.

"On the day it will be about keeping everyone relaxed and calm and remembering to nail your basics and your skills."

"We know we didn't play very well in the final group game. It was important to regroup and get our head around playing in the semi-final.

"There were plenty of positives and reaching Finals Day was the target we set ourselves at the beginning of the competition.

"We know what sort of team we're coming up against (Western Storm) and we played some good cricket against them last time out.

"We've benefited from having plenty of close games during the group stage, so it is a case of been there and done it in terms of pressure, even for the younger players.

"We've told the players to go out and have fun because that's when we play our best cricket."