England were denied the chance to press for a series whitewash over Sri Lanka as rain ruined the final day of the third Test at Lord's.

Kaushal Silva was the sole wicket to fall, lbw to James Anderson, before play was called off at 17:10 BST.

A five-match one-day series starts on 21 June, followed by a Twenty20.

Dimuth Karunaratne finished unbeaten on 37, while Kusal Mendis made 17 not out, hitting Joe Root for six off the final ball of the match.

With both sides taking two points from the draw - Sri Lanka's first in 17 Tests - England lead 10-2 in the inaugural 'Super Series'. There are 12 points available in the limited-overs series.

For all England's frustration at the weather on Monday, they can take credit for the efficient manner in which they completed a 2-0 series win over an inexperienced Sri Lanka side exposed by early summer conditions.

Jonny Bairstow's return of 387 runs was 95 more than the next best batsman and cemented his place in the middle order, while Alex Hales took a sizeable step towards securing the opener's berth by averaging 58.

But England's success was founded on the potency of their attack, led brilliantly by James Anderson with 21 wickets at less than 11 apiece.

Stuart Broad's haul of 12 wickets was bettered only by Anderson, Chris Woakes produced his Test best with bat and ball after replacing the injured Ben Stokes, and Steven Finn hinted at a welcome return to form at Lord's. 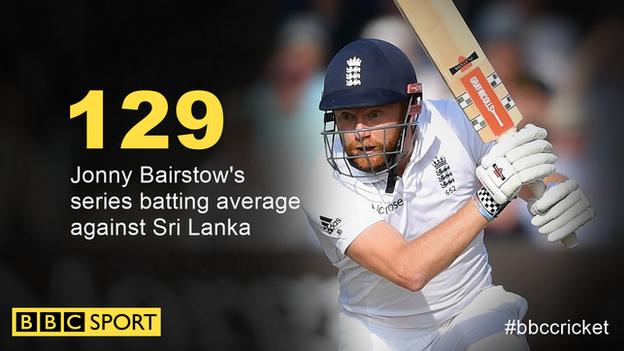 ..but questions still to be answered

England may hold all but one of the nine trophies on offer against countries in bilateral series, but there remain grounds for concern for coach Trevor Bayliss.

Their top-order collapses are still to be eradicated - they have lost their first four wickets before reaching 100 five times in the past seven innings.

The search for a reliable number three goes on after Nick Compton managed only 51 runs in five innings, and it remains to be seen whether James Vince, who scored only 54 runs at 13.5, will be retained at number five for the Pakistan series later this summer.

Despite taking 19 catches - a record for an England wicketkeeper in a three-Test series - Bairstow's glovework has been heavily criticised thanks to three drops and a missed stumping.

'I proved a few people wrong' - what they said

Sri Lanka skipper Angelo Mathews: "It would have been an interesting chase but the weather interrupted. We wanted to go for it."

Man of the match and man of the series Jonny Bairstow: "I felt like I had a few people to prove wrong. This series and in South Africa I think I've done that."

"If Stokes isn't fit, Finn will survive. If Stokes is fit, Woakes has out-bowled Finn. Compton has two four-day matches for Middlesex and I don't know which way the selectors will go."

How's stat?! The numbers you may have missed