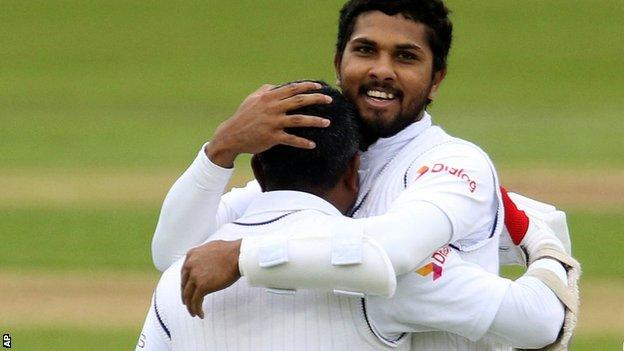 After an innings defeat in the first Test, Sri Lanka were bowled out for 101 in the second, but then resisted for 475 to delay England's nine-wicket win.

"After the first innings we talked about bringing the fight back into the team," Mathews told Test Match Special.

"We showed a lot of resilience in the second innings. It was a good effort by the whole batting unit."

By sealing victory at Chester-le-Street, England completed a series victory before the third and final Test at Lord's, which begins on 9 June.

"We have nothing to lose," said Mathews. "We've lost the series already so we just have to go out there to try to win the game."

For England, the win in Durham means they have won nine of their past 12 Tests at home and Alastair Cook's men have lost only one of their past seven series, dating back to when Sri Lanka won in the UK in 2014.

"It was an eight out of ten performance," England coach Trevor Bayliss told Sky Sports. "We've got to work on our bowling on flattish wickets, and I'd like to see our batters turn starts into bigger scores. We're still a work in progress."

England have named the same 12-man squad for the final Test, with Nottinghamshire pace bowler Jake Ball perhaps in contention to replace Steven Finn, who has taken four wickets at an average of 34.50 in the series.

"We'll consider all options for Lord's," said Bayliss. "I'd be interested in having a look at Bally if possible, but if not, his time will come."