England and Nottinghamshire batsman James Taylor has been forced to retire because of a serious heart condition.

Scans have shown that Taylor, 26, has a condition similar to the one which affected footballer Fabrice Muamba.

Taylor, who has played seven Tests and 27 one-day internationals for his country, posted on social media: "Safe to say this has been the toughest week of my life!

"My world is upside down. But I'm here to stay and I'm battling on!"

Taylor felt ill during the first day of his county's pre-season fixture against Cambridge MCCU last week and was taken to hospital.

It was initially thought he had a viral condition, but he has since been diagnosed with Arrhythmogenic Right Ventricular Cardiomyopathy (ARVC) and needs an operation.

Taylor later posted on Facebook: "Absolutely overwhelmed with all the support I've received. You don't understand how much it means to me and how much it helps! Thank you!"

England team director Andrew Strauss spoke about his "shock" and "sadness" at the news.

"Throughout his career, he has constantly impressed with his determination to make the absolute most of his ability," said Strauss.

"It is immensely cruel that such a hard-working player will be unable to fulfil his great potential in the international arena."

Footballer Muamba collapsed when his heart stopped for 78 minutes while playing for Bolton Wanderers against Tottenham Hotspur in 2012.

He has since retired from the game.

What are symptoms of ARVC?

Professor of clinical cardiology Sanjay Sharma is also the consultant cardiologist for the Cardiac Risk in the Young (CRY) sports cardiology clinic, as well as the medical director for London Marathon.

He explained the condition to BBC Radio 5 live:

Could Taylor continue in cricket?

Professor Sharma, who is also cardiologist for the English Institute of Sport, British Rugby League and the British Lawn Tennis Association, said Taylor could still coach cricket and participate in "recreational exercise", such as cycling, gentle jogging and swimming.

"Usually the most difficult bit is for a sportsman to accept they may have to hang up their cricket bat or their football boots," said Professor Sharma. "That's a very tough blow for someone as young as he is.

"He can carry on a normal lifestyle. There's no reason why he won't finish off having a normal lifespan if he's careful about how much exercise he does."

"His county stats are very impressive for Leicestershire and Notts - and some thought he should have played for England sooner.

"But he waited and worked hard. He never slackened off in his desire and took his chance when it came. He would have played a lot of cricket for England.

"He made the most of every ounce of his talent. He's understandably devastated but grateful it was spotted. People will miss him. He's a lovely kid."

Nottinghamshire all-rounder Steven Mullaney, Taylor's former team-mate and room-mate: "We are numb, shocked and gutted but we are delighted he is still with us because it could have been a hell of a lot worse.

"He had the world at his feet, but it's been taken away from him. But we will give him our full support.

"This time last week he was batting at Cambridge and the day after he was in hospital. It is a shock and it is quite hard to get words out.

"I saw him last week before the news and he was full of beans. I'm looking forward to seeing him again and giving him a big hug."

Warwickshire captain and former England team-mate Ian Bell: "It is an immensely sad day. We couldn't believe it when we were told this morning. Thoughts are with Titch and with a speedy recovery.

"He is one of the top blokes in English cricket and I know Chris Woakes is very close and really upset. It is shocking news." 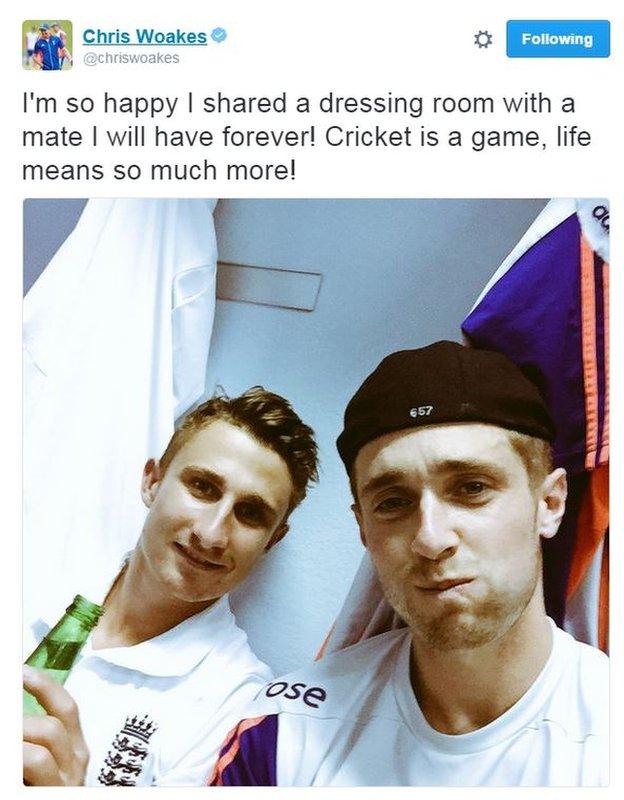 Former England batsman Alec Stewart: "The last thing you want to see is someone's career coming to an end - whether players are released or retire - but when you see that at the age of just 26, it's so cruel.

"His international career had just kicked on. He'd played nicely in Test match cricket and I firmly believed he'd end up playing all forms of the game consistently for England.

"But now we'll be talking about him in the past tense as an England cricketer, instead of someone who had a very bright future ahead of him.

"His playing career is over, sadly, but he's got so much to offer - you can see him coaching, he's good with the media and it's genuine."

England batting coach Mark Ramprakash: "I'm shocked and so disappointed because it was such a pleasure to work with him.

"He was absolutely set to become a fixture in the England one-day and Test sides. His skills were so good against pace and spin.

"Once he is over this, his work ethic and personality is such that whatever he turns his hand to he will be very successful."

Jonathan Agnew, BBC cricket correspondent: "It's easy to take a step back and be detached and say 'thank goodness he's been diagnosed' and there isn't a terrible tragedy for the Taylor family here to cope with.

"He'll obviously be desperately disappointed but the bigger picture has to be that it's a serious condition and hopefully it can be treated and he'll live a normal life.

"But when you're a sportsman, you're 26 with the world at your feet, and you want to play at the start of a new season - clearly it's devastating for him.

"Short batsmen are notoriously difficult to bowl at. James was very strong off the back foot - a good cutter, good puller, but most of all had a fighting instinct. That's the way he played his cricket and I'm sure that's the way he'll cope with this.

"He's made for coaching. He's the sort of person you want in your dressing room and I'm sure he's still got lots to put into the game."

Professional Cricketers' Association statement: "The news has come as a great shock. Our thoughts are with James as he comes to terms with the end of his cricket career at such a young age and at a time when he had established himself as an international cricketer.

"We have a six-strong team of personal development managers who work across the 18 first-class counties to help players plan and prepare for life after cricket and we will offer James all the help we can to ensure that the transition to a new career is as smooth as possible."

England selector, former international cricketer Angus Fraser: "Every county - since the Fabrice Muamba situation - has been more aware of heart issues, and the testing that takes place is very strict.

"To see something like this not picked up, through no one's fault, makes you realise how vulnerable you are at the highest level whenever you are pushed to extremities."

BBC Test Match Special commentator Charles Dagnall: "I feel this will rock his world. Batting was his life and has been since an early age. It is easy to talk about someone who is 40 and retired and had a great Test career, but he's retired at 26 and had so much more to look forward to.

"He's unorthodox and his height was an issue in some people's eyes, but he overcome it.

"Years ago, I had a conversation with an England selector, who will remain nameless. He asked me to tell him about James Taylor. I said he is ready for international cricket, but he said he cannot hit the ball straight. I replied that is not the way he plays. He plays in a completely different way. He makes the game work for him in his own manner.

"England saw him as a potential one-day international captain, not just a talent with bat, but able to flourish in Trevor Bayliss' international system."

Taylor, the son of former professional jockey Steve, made his first-class debut for Leicestershire against Worcestershire in April 2008 and joined Nottinghamshire before the 2012 season.

The Nottingham-born batsman played the first of his seven Test matches for England against South Africa at Headingley in 2012. He averaged 26 and his top Test score was 76 against Pakistan in November 2015.

Taylor's one-day international debut came in 2011 against Ireland. He averaged 42.23 in 27 ODIs, scoring seven fifties and one century - 101 against Australia in September 2015.

At the time of his retirement, Taylor had the fourth-highest limited-overs average - including international and domestic matches - in history... 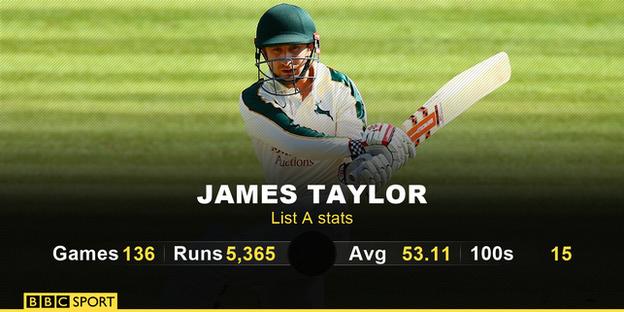 What is the current screening regime in cricket?