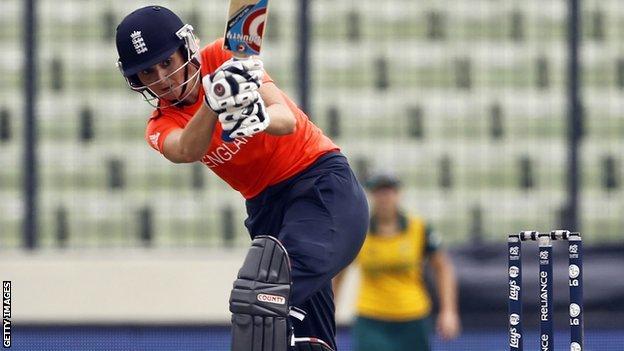 England captain Charlotte Edwards has claimed that some of the pitches used in the Women's World Twenty20 are "not a good advertisement" for the game.

Edwards criticised the slow, turning nature of some of the wickets, which have led to many low-scoring matches.

She told BBC Sport: "In terms of promoting the game, it's not great."

England face Australia in Wednesday's first semi-final in Delhi, after beating Pakistan by 68 runs in Chennai on Sunday.

Edwards said: "We've played on some average pitches throughout the tournament, especially in Dharamsala, which was tough for the batters.

"We came back to Chennai and felt more at home there, and what I hear Delhi will be a nice wicket for us."

In Dharamsala, England restricted India to 90-8, but struggled against an all-spin attack and won with just six balls to spare.

In an interview with the BBC's Joe Wilson, Edwards added: "It is not a great advertisement for the game, especially when they are on the television. When you've got 18 overs of spin in each game, it's not particularly fantastic for anyone."

Australia now stand between England and their fourth final in five editions of the Women's World T20.

The Southern Stars, holders of the Women's Ashes, have had the better of England in the past three tournaments - beating them in the 2014 and 2012 finals, and edging them out at the group stage in 2010.

Edwards added: "It's the fiercest rivalry in cricket. We've got a good record against them in semi-finals and hopefully that continues."