England were given an almighty scare before beating Afghanistan by 15 runs in Delhi to keep their World Twenty20 campaign on track.

Willey then removed Mohammad Shahzad in the first over of the Afghan reply.

From there, regular wickets meant Afghanistan were never in the chase, eventually falling away to 127-9.

It meant Afghanistan, the only side outside of Test cricket left in the competition, missed out on recording their first win against one of the game's major nations.

As for England, they avoided the sort of upset that would have ranked alongside defeats by Ireland, the Netherlands (twice) and Bangladesh (twice) in recent World Cups and World T20s.

Eoin Morgan's men will definitely reach the last four if they beat Sri Lanka on Saturday and South Africa are defeated by West Indies on Friday.

On a true, if sluggish, surface, England shambolically collapsed to the Afghanistan slow bowlers in a four-over spell that saw the 2010 champions lose five wickets for 15 runs.

In all, Afghanistan bowled 16 overs of spin, with six of England's wickets falling to the slow bowlers.

Off-break bowler Nabi and 17-year-old leg-spinner Rashid conceded only 17 runs from their respective spells of four overs, while England went through a spell of 42 deliveries in which they scored just one boundary.

Moeen had no choice but to rebuild, first in the company of Chris Jordan, then with Willey.

After a period of slow accumulation that looked to have England well short of a competitive total, Moeen and Willey finally launched their attack in the 19th over, bowled by slow left-armer Amir Hamza.

Moeen heaved a slog sweep for six and flat batted four down the ground, before Willey found huge maximums straight and over the leg side.

With 25 off that over going towards a total of 44 off the final three, England had a score they could defend if they bowled well.

Call off the chase

Despite the shift in momentum, Afghanistan still posed a threat in the shape of explosive opener Shahzad, only for Willey to trap him in front with an inswinger from the third ball of the innings.

Jordan and Willey each struck once more to leave Afghanistan 13-3 after three as England's bowlers, poor in the opening games against West Indies and South Africa, put in an improved display.

Liam Plunkett, in the side for Reece Topley, caused discomfort with his pace and bounce, his figures of 0-12 the third-most economical by an England bowler who has completed four overs in a T20.

In the end, it was not close, but the margin of victory did not reflect how near England were to another embarrassment. 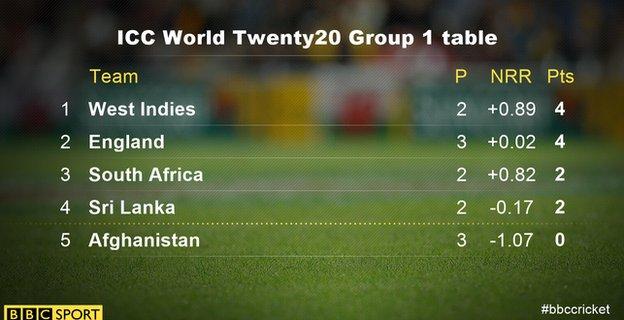 England captain Eoin Morgan: "We didn't really adapt to the surface when we were batting. David Willey and Moeen Ali played really well to allow us to put a score on the board, but we fielded and bowled well."

Man of the match Moeen Ali: "We wanted to give ourselves time, take it to the last three overs and have a hack at the end. It was about getting the job done against a good side. It was a tough game."

Afghanistan captain Asghar Stanikzai: "The guys in the top order lost wickets early to poor shots. The pitch wasn't difficult and they didn't take responsibility. That's a big reason as to why we lost."