New Zealand's total of 126-7 was built around Corey Anderson's patient 34.

The value of his innings only became apparent as India, in familiar conditions and with a fervent crowd behind them, slumped to only a second defeat in their past 12 T20s.

England start their Group 1 campaign against West Indies in Mumbai at 14:00 GMT on Wednesday, after Pakistan and Bangladesh meet in Kolkata at 09:30.

Beating India at their own game

The manner of defeat as much as the margin will puncture India's hopes of becoming the first team to win the tournament twice.

All but Dhoni and Virat Kohli, who made 23, among the India batsmen found scoring difficult on a surface that was far from conducive to the explosive strokeplay so familiar with the shortest form of the game.

Off-spinner McCullum removed Shikhar Dhawan in the first over, slow left-armer Santner bowled with control and no little guile, and India-born Sodhi found considerable turn with his leg-spin.

Santner had Rohit Sharma stumped and Suresh Raina caught via a leading edge in his first over to reduce India to 12-3, before Yuvraj Singh offered McCullum a return catch.

Dhoni watched Kohli, Ravindra Jadeja and Ravichandran Ashwin fall to the impressive Sodhi - playing only his sixth T20 - and India's defeat was confirmed when the skipper was superbly held low down by McCullum at long-on in the 18th over.

A New Zealand victory looked unlikely to say the least when they slipped to 13-2 and 35-3 amid a flurry of attacking strokes after Kane Williamson won the toss.

Martin Guptill was lbw to Ashwin immediately after hitting the first ball of the match for a towering straight six, while Colin Munro, who reverse-swept his first delivery for six, miscued a drive at Ashish Nehra to mid-on.

Anderson, boasting a career strike-rate of 144, managed only three fours in his 42-ball innings, the need for survival outweighing aggression as he lost regular partners.

Off-spinner Raina had Williamson stumped for eight before brilliantly running out Ross Taylor with a dive and flicked throw - all in one movement - in his follow-through.

Jasprit Bumrah's superbly directed yorkers accounted for Anderson, who was bowled attempting a paddle sweep, and limited the Kiwis' late-innings charge in a seemingly modest total.

Their spinners ensured it was more than enough.

New Zealand's next match is against Australia in Dharamsala on Friday, while India face neighbours and arch rivals Pakistan on Saturday, a match that was moved from Dharamsala to Kolkata because of security concerns.

...according to BBC Sport readers, who voted online during India's game against New Zealand. 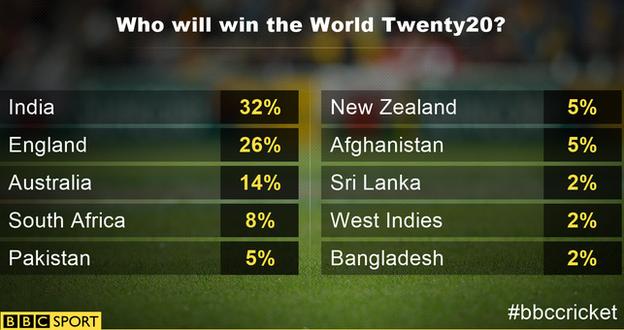 *Votes are rounded up or down to the nearest percentage point