Afghanistan reached the second phase of the World Twenty20 for the first time with a 59-run win over Zimbabwe.

Afghanistan join England's group in the Super 10s, which feature the major nations and start on 15 March.

'Afghanistan is about to go very crazy'

Afghanistan, who are coached by former Pakistan batsman Inzamam-ul-Haq, failed to progress beyond the first round in the three previous World T20s.

Man-of-the-match Nabi added: "We are through to the Super 10s round. You can't measure how ecstatic we are."

Having won their three group games in this tournament, they face defending champions Sri Lanka in their opening Super 10 encounter on 17 March in Kolkata.

Afghanistan's success was founded on the explosive batting of Shahzad, who dominated an opening partnership of 49 in five overs.

His was the first of four wickets to fall for 14 runs, but Shenwari and Nabi consolidated before accelerating during a stand of 98 off 64 balls, a T20 record for Afghanistan's fifth wicket.

Zimbabwe, who bowled 17 wides, were equally wasteful with the bat, a flurry of reckless shots hastening their slide from 43-1 to 98-8.

Number 10 Tinashe Panyangara, who had earlier taken 3-32, top-scored with an unbeaten 17.

"They outplayed us in every facet of the game," said Zimbabwe captain Hamilton Masakadza. "We were never in the game." 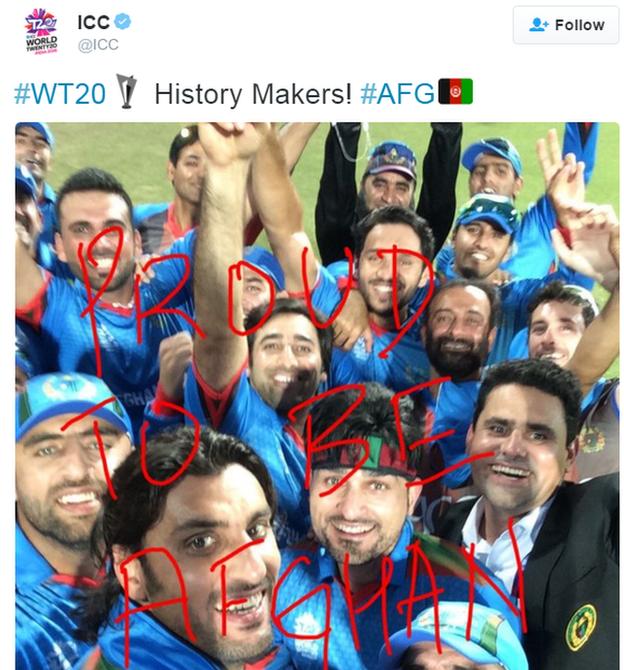