England women added the Twenty20 series to their one-day success over South Africa by winning the deciding match in Johannesburg by four wickets.

South Africa were reduced to 6-3 in the second over as Anya Shrubsole struck twice in two balls.

England's 2-1 series win, which matched the ODI series result, was their last competitive action before their opening World Twenty20 match against Bangladesh on 17 March. 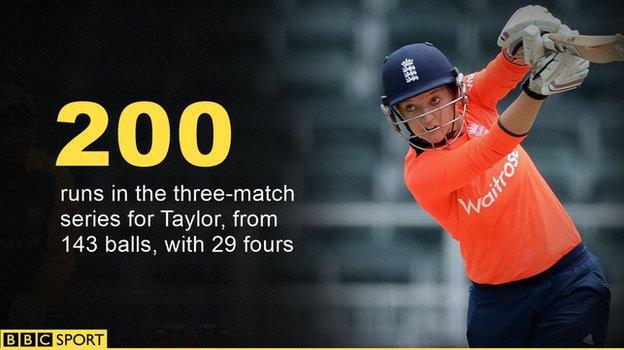 It was another consummate display from 26-year-old Sussex wicketkeeper-batsman Taylor, who was named player of the match and the series.

In her 76th T20 international she passed 2,000 runs, while her 15th half-century came from only 33 deliveries.

Using her feet authoritatively and playing a variety of strokes all round the wicket, including some nonchalant reverse sweeps and dinks, she hit three fours in four balls from left-armer Chloe Tryon,before she was superbly caught and bowled with 17 required for victory.

Earlier, Taylor had displayed her wicketkeeping talents with a sharp leg-side stumping in the first over of the match, before Shrubsole put England firmly in command with some devilish inswingers.

Lee came to the crease facing a hat-trick but played a purposeful innings, seizing on any short deliveries with some powerful pulls and precise cut strokes.

She was ably supported by her captain Mignon du Preez in a partnership of 89 which was ended in the 17th over by a direct hit from Heather Knight, a rare highlight among several misfields from England.

'Sarah was fantastic' - what they said

"Full credit to to South Africa - they really pushed us. We've got some areas to work on, as a collective we haven't bowled or fielded well enough. But overall I'm really happy.

"Sarah Taylor was fantastic - she always has been. Hopefully she's saved some runs for the World Twenty20 in India."

South Africa captain Mignon du Preez: "Unfortunately we were on the back foot early on. We did well to recover but we couldn't get over the line. England played brilliantly."

Player of the series Sarah Taylor: "In the last two one-dayers I wasn't happy with how I performed, so today it's good to be able to contribute."