A remarkable spell by Stuart Broad inspired England as they beat South Africa by seven wickets in the third Test to secure a series victory.

In one of his trademark hot streaks, Broad took 5-1 in 31 balls as the hosts were bowled out for 83 in Johannesburg.

England, earlier bowled out for 323, were taken to their target of 74 by Alastair Cook's 43 for a three-day win.

Cook's men go 2-0 up, with only the fourth Test still to play, for a first overseas series victory since 2012.

Regardless of the result of the final match in Centurion, South Africa - now without a win in nine Tests - will be replaced by India at the top of the Test rankings.

Brilliant Broad does it again

Broad had taken five wickets in a single spell on six previous occasions, the most famous of which were Ashes-winning hauls at The Oval in 2009, Chester-le-Street in 2013 and Trent Bridge in 2015.

This was just as devastating, not least because the match was finely poised, with England holding only a 10-run first-innings lead.

On a pitch offering bounce and seam movement, and under a grey sky, Broad's hostility and accuracy was too much for a South Africa batting line-up that did little wrong, but had no answers.

Immediately after lunch, Broad bowled six overs to claim the first five wickets to fall - the one run he did concede was a dropped catch. This is how the collapse unfolded: 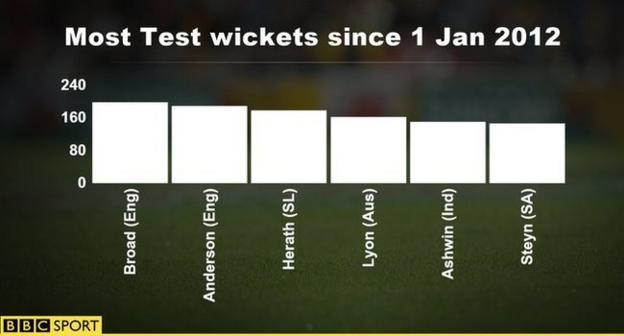 'He's just got that X factor'

Ex-England batsman Geoffrey Boycott: "Broad bowled with wonderful pace, rhythm, accuracy; he cut the ball, made it bounce - and he fully deserved it. One or two of those balls might have got anybody out."

Former England captain Michael Vaughan: "Broad just keeps producing these spells. He's just got that X factor, when he gets in rhythm on any surface, that knack of taking wickets.

"When he's hot, he's roasting. And when he has those moments he just flies through teams."

Broad was not alone in his brilliance - he was supported by the rest of the England pace quartet and Taylor under the helmet at short leg.

His first catch, to remove Amla, was impressive in that he managed to stay low to hold the ball inches off the turf after it had been turned off the middle of the bat.

The second, to dismiss Dane Vilas from Steven Finn's second delivery, was breathtaking. As Vilas clipped the ball off his hip, Taylor dived full-stretch to his right and clung on in one hand.

After that, Stokes found prodigious swing to york Chris Morris and have Kagiso Rabada caught behind, James Anderson pinned Hardus Viljoen leg before and Broad completed his haul by athletically taking a catch off his own bowling when Faf du Plessis swiped the ball into his thigh pad.

England bat twice in a day

England's emphatic victory seemed unlikely after South Africa had the better of the morning session. From 238-5 overnight, the tourists lost their last five wickets for 81 runs.

Joe Root added only four to his 106 before playing a loose drive at Rabada, who would go on to claim his first five-wicket haul.

Bairstow's 45 nudged England into the lead, but when he skied to mid-on to become the last man to fall it looked as though Cook's side had wasted the opportunity for a match-winning lead.

Then came Broad's devastating spell and, after that, England's chase was a formality.