Ben Stokes hit the fastest double century for England, the second fastest in history, on day two of the second Test with South Africa in Cape Town.

Jonny Bairstow (150) struck his maiden Test century and shared in a stand of 399, a sixth-wicket world record.

Only New Zealand's Nathan Astle has reached a Test double hundred more quickly than Stokes, off 153 balls against England in 2002.

Driving the ball fluently when given width outside the off stump and ruthlessly pulling anything short, 24-year-old Stokes hit five fours in the opening two overs of the day and smashed spinner Dane Piedt for 16 in three balls.

He plundered 130 in the morning, the most by any batsman in a pre-lunch session, moving from 150 to his double century in just 28 deliveries, before beating Virender Sehwag's landmark for the fastest Test 250.

Attempting a third successive six to equal Wasim Akram's record of 12 for the highest number of maximums in a Test innings, Stokes lofted to AB de Villiers at mid-on, who fumbled the catch but ran out the left-hander with a direct hit.

Stokes in numbers - the records that fell

Bairstow would have dominated the headlines on any other day, displaying impressively powerful hitting of his own.

The 26-year-old Yorkshire wicketkeeper hit five fours and a six in the space of nine balls and now averages 104 in three matches against South Africa.

Having made six half-centuries, the wicketkeeper recorded his maiden Test hundred in his 37th innings.

Standing tall at the crease and dispatching the ball to all quarters with a high backlift, he reached 150 from 191 balls and with that the declaration came.

As so often happens after a team replies to a mammoth total, South Africa lost an early wicket, Stiaan van Zyl run out by Nick Compton after being sent back by Dean Elgar as he went in search of a single.

The current number one Test side, who have lost four of their past five matches, rallied before Stokes returned to the action and had Durban centurion Elgar superbly caught for 44 by a diving Compton at point.

De Villiers (25 not out) was dropped on five by Joe Root at second slip off James Anderson and began to look more assured in favourable batting conditions at a cloudless Newlands, sharing an unbroken 56 with Hashim Amla, who ended a run of 11 innings without a fifty in reaching 64 not out.

Two of the three wickets to fall on a day when 453 runs were scored - a record in South Africa - were run-outs, so a straightforward second successive victory for England is by no means guaranteed.

'Astonishing, magnificent, phenomenal' - what they said

BBC cricket correspondent Jonathan Agnew: "What an astonishing innings. This man has played an innings that no-one here will ever forget.

"They are all standing and applauding something that has been absolutely magnificent."

Former England batsman Geoffrey Boycott on Test Match Special: "That was phenomenal. You've seen something special. You don't get 200s like that very often - very rare. It's been a memorable day."

Former South Africa captain Graeme Smith: "Even as a South African you have to enjoy this. It's been both gut-wrenching and electric to watch.

"You've got a appreciate this. Everyone is witnessing something special."

How the public reacted

As Stokes blasted boundaries at will, we asked you to compare him to some comic-book heroes... 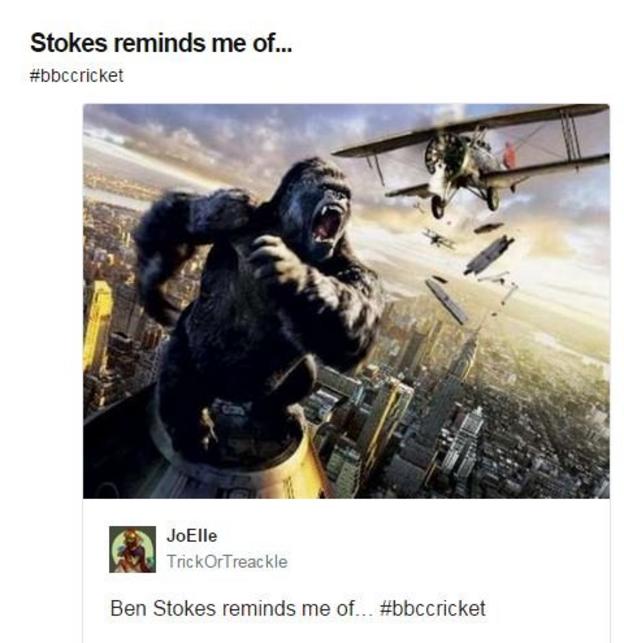