Anderson missed the 241-run first-Test win with a calf strain but is likely to replace Chris Woakes for the match at Newlands, which begins on Saturday.

"My thought is you'd probably go with him, so fingers crossed he comes to us and says his body's feeling good," said England coach Trevor Bayliss.

Steyn, ranked as the number one Test bowler in the world, twice left the field during the first Test in Durban and will be replaced by Kagiso Rabada.

Another Proteas pace bowler, Kyle Abbott, faces a fitness test on Friday, while wicketkeeper Quinton de Kock could be included to allow AB de Villiers to concentrate solely on batting.

Anderson worked hard in the nets during the Durban Test, building up to a full six-over spell in the middle on Wednesday morning.

Without him, England were still able to bowl South Africa out for 214 and 174 in the first Test in Durban, with Moeen Ali taking six wickets in the match, Steven Finn six and Stuart Broad five. 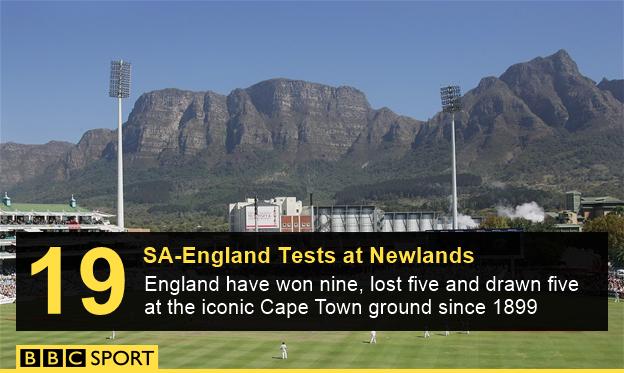 Broad took the first over in both innings in Durban and former England spinner Graeme Swann has backed the Nottinghamshire seamer to lead the attack even when Anderson returns.

"Jimmy's performance would not be affected by not being the official leader of the attack," Swann told BBC Radio 5 live. "I'd say we are going to hand that to Stuart now because we are looking for leaders and future captains in this team.

"Stuart Broad is a good option for that. Jimmy is world class and we can wrap him in cotton wool from now on, not play him in every Test match, not in everything.

"It may sound ridiculous that our highest wicket-taker ever is stripped of a role, but this is just to pump up Stuart's tyres. Jimmy is still the best bowler."

England coach Bayliss has welcomed the impact made by Nick Compton, who made 85 and 49 at Durban in his first Test since May 2013.

There were suggestions that the 32-year-old Middlesex batsman's intense nature was the reason he was dropped after only nine Test appearances, even though he scored two centuries in that time.

"I'm not going to judge anyone on what went before," Bayliss said. "Everyone is allowed to get better and so far around the squad Nick has been fantastic, fitted in really well with the squad, and obviously batted very well.

"In Test cricket there is a role for someone who is able to get through those tough periods and make hundreds. We'd take that with our team at the moment, which has a lot of guys that play shots in the middle order.

"If those guys can bat around Cook and Compton that could be the way ahead for us."

South Africa are without a win in their last seven Tests, which equals their longest sequence without a victory since their re-admission to international cricket in 1991 following their Apartheid ban.

De Kock, who averages 33 from his six Tests, the last of which was in July, could return to keep wicket having made a hundred in the recent round of domestic four-day matches to follow a half-century against England for South Africa A.

De Villiers dropped two catches behind the stumps during England's second innings of the first Test and there have been concerns over the star batsman's workload.

"Quinton being here gives us the option of him being here and probably batting at number six or seven," said captain Hashim Amla. "The selectors still have to make a call on whose position he will end up taking.

"It gives us the option of taking a load off AB and he can stay batting at number four."

Amla has made only 94 runs in his last eight Test innings but has stated his desire to remain as skipper.

"I've enjoyed every minute of it and it's just been disappointing not to get the runs," he said. "In the middle of a Test series like this there is more hunger to get runs on the board."

Smith, who led the Proteas 108 times in Test cricket, retired in 2014 and has been working as a pundit for Test Match Special.

"Graeme being the excellent cricketer he was, he can add some value to the batters, which he has already," sad Amla.

"He knows more than most how it is to play Test cricket and how to get through tough times - that type of experience is invaluable to us and that's why we've tried to draw on it."

Amla said he thought Smith would be with the Proteas for the rest of the series, but the former captain has so far only helped on an ad hoc basis prior to the Cape Town Test and has not signed a formal agreement.