Chris Woakes will replace the injured James Anderson in England's bowling attack when the four-match series against South Africa begins in Durban on Saturday.

Warwickshire's Woakes will play his first Test match in 16 months, after Anderson suffered a calf injury.

Alex Hales, 26, is set to make his Test debut and will be the eighth opener to partner Alastair Cook since 2012.

South Africa are ranked number one but lost their last series in India 3-0.

An England victory by any scoreline would see South Africa lose top spot to India, while only a win will ensure captain Alastair Cook's men improve their ranking of sixth.

However, England have won only one series in South Africa since the Proteas were readmitted to Test cricket in 1991 and Cook's side have triumphed only once in their last 15 overseas Tests. 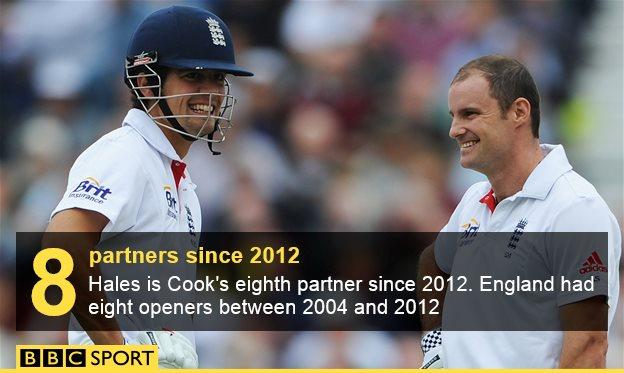 Although England were Ashes winners four months ago, from the XI that played in the fifth Test against Australia, three have been dropped, two have been shifted around the order and two are injured.

The ankle injury to pace bowler Mark Wood is covered by the fit-again Finn, while 26-year-old right-armer Woakes steps in for Anderson to play his fifth Test.

"What an opportunity for him to play," said Cook, speaking on his 31st birthday. "He's been around the squad for a long time and he'll be itching to make his mark."

Anderson, 33, was almost fit enough to start in Durban and remains likely to return for the second Test.

"It's a shame for Jimmy, but we've got some really good guys coming in to replace him," said Stuart Broad, who will lead the attack in Anderson's absence.

"Steven Finn was the standout bowler last week [against South Africa A, when he took six wickets]. The other guys have all put in performances throughout this tour."

Meanwhile, spin bowler Moeen Ali will drop back down to number eight after covering as an opener against Pakistan, and Jonny Bairstow, who played in the Ashes as a specialist batsman, will retain the wicketkeeping gloves following the dropping of Jos Buttler midway through the Pakistan series.

Joe Root has recovered from his stomach illness and will be fit to play. James Taylor continues at number five, but there will be a new-look top three, with Nick Compton poised to play behind Hales and Cook in place of Ian Bell.

While Nottinghamshire's Hales averages only 38 in first-class cricket, he is the only England batsman to have scored hundreds in Twenty20 and one-day internationals, and also made a half-century in the warm-up match against South Africa A.

However, England will face Dale Steyn and Morne Morkel - probably the world's best new-ball pair - on pace-friendly pitches with a top eight where none except Cook and Joe Root have played more than 20 Tests.

Problems for the Proteas 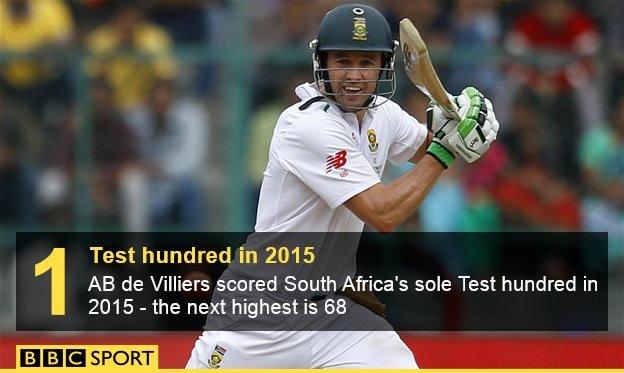 A formidable South Africa side that went nine years and 30 Test series with only two defeats is now also in a state of transition.

Finding a replacement for all-rounder Jacques Kallis, who retired in 2013, was always likely to be difficult, but the Proteas have also struggled at the top of the order since former captain Graeme Smith quit the following year.

It was the batting which failed the Proteas in India, prompting Hashim Amla's side into a reshuffle of their own.

"Opening the batting is the most difficult job in Test cricket," Amla said. "Dean Elgar has been very good for us, and Stiaan van Zyl has got the full potential to be a great opener for us.

Most significantly, AB de Villiers has been asked to keep wicket in order to find space for another batsman.

De Villiers is ranked as the third best Test batsman in the world and Amla seventh, but England will be targeting the rest of a top seven that is either inexperienced or out of form.

The home side are boosted by Steyn's recovery from a groin injury, but Vernon Philander is out with an ankle problem.

"The way Dale has been bowling in the nets has been unbelievable," Amla said. "He's been the best bowler in the world for many years. We're really glad to have him back."

England have visited South Africa four times since the Proteas returned to the international fold, with each tour proving memorable for a variety of reasons.

England's 1-0 defeat in 1995-96 was the tour in which Michael Atherton batted for nearly 11 hours to earn a draw in Johannesburg, while South Africa's 2-1 win four years later included the 'leather jacket Test', when disgraced former Proteas captain Hansie Cronje was paid to corruptly ensure that the fifth Test did not end in a draw.

In 2004-05, Michael Vaughan's England secured a 2-1 win that preceded their Ashes triumph, while the one-day leg of the trip saw Kevin Pietersen score three centuries despite abuse from the crowds in the country of his birth.

Six years ago, on England's most recent South Africa tour, they escaped with a 1-1 series draw after number 11 Graham Onions twice saw off the final over of the match to earn two draws.

"There's no question England are confident of pulling off their second unexpected success of the year, but they will have to bat better than they did while winning the Ashes.

"The batting is the battleground of the series, with South Africa's line-up losing a lot of confidence in their defeat in India, which resulted in both frontline spinners being dropped and AB de Villiers returning to keep wicket.

"England also came unstuck against Pakistan but both teams will prefer the conditions that await them in these four Tests.

"South Africa's pace attack will target Alex Hales, who has to prove he has the technique and temperament to cope with high-class new-ball bowling. If he fails, Nick Compton will move quickly from three to opener.

"The pace bowling of both teams will be challenging and exciting and it will be the batting line-up that deals with it the best that will ultimately prevail."

England coach Trevor Bayliss: "It's been a good 12 days that we've been here. It was good to see our top four guys score runs.

"To be successful in this series, the top four guys are going to have to play very well so it's good for them to spend some time in the middle leading up to this first Test.

"Everyone has scored some runs and taken some wickets so, preparation-wise, it's as good as we could have hoped for getting ready to play the number one team in the world."