An ignominious defeat by the Netherlands and a limp exit from a tournament they had won four years earlier, the 2014 World Twenty20 marked one of the lowest points in England cricket history.

Thanks to a stunning change of approach, Eoin Morgan's side can now be considered serious contenders for the 2016 competition in India starting on 8 March.

A historic 3-0 series whitewash of Pakistan in the UAE in November extended England's winning T20 run to six games - and they have lost only once since their Dutch humiliation.

After the draw for the World T20 was made on Friday, England batsman Joe Root and former spinner and 2010 winner Graeme Swann assess the reasons behind their resurgence and discuss whether they can become the first side to win the competition twice.

A shift in focus

Andrew Strauss won only four T20 caps as a player, but the decision by England's director of cricket to concentrate more on limited-overs cricket this year was a vital factor in their T20 resurgence this year, according to Swann and Root.

"The greatest thing that's happened is Strauss getting in charge and completely separating the Test and one-day cricket formats, getting specialists in, people who have grown up playing the game," says Swann, who played 39 T20s between 2008 and 2012.

"In my time if you were a centrally contracted player you played ahead of guys that played a lot more T20 cricket.

"I don't think it's any surprise that the upturn in results is due to guys who are just better at the game playing for England."

Yet with separation has come a greater sense of unity between the ODI and T20 sides.

"The way we've approached one-day cricket recently has definitely helped the T20 team with more consistency in the overlap between the sides," says Root.

"You've got guys like Alex Hales and Jason Roy getting a lot more international experience.

"Having that opening partnership go across both formats and that understanding of batting with one another, that's very important."

After Peter Moores' ill-fated second spell in charge ended in dismal fashion following an early exit from the World Cup in March, England have flourished under the guidance of head coach Trevor Bayliss, assistant Paul Farbrace and captain Morgan.

Australian Bayliss has an impressive T20 pedigree, winning Australia's Big Bash with Sydney Sixers in 2011-12 and leading Kolkata Knight Riders to the Indian Premier League (IPL) title in 2012 and 2014.

But Root says: "The best thing you can get from a coach is to relax you completely so you can concentrate when you're under pressure.

"They play a massive part in making sure we get ready as sometimes the most important thing is to un-complicate things."

Swann says Bayliss has made a "huge impact", particularly in his relationship with Morgan.

"It seems to be a lot freer atmosphere now," Swann adds. "People seem happier to express themselves and play a much more expansive game."

It was with little fanfare and even less surprise that Strauss confirmed the permanent appointment of Morgan as T20 captain in place of Stuart Broad in May.

Swann says Morgan's "exceptional one-day brain" is key to why they have not lost since.

"Morgan is our chief T20 player and our chief T20 mind because he's been exposed to so much," he says. "He's played a lot in India; he's seen the IPL; he's lived and breathed it."

'I'd hate to bowl at this England team' 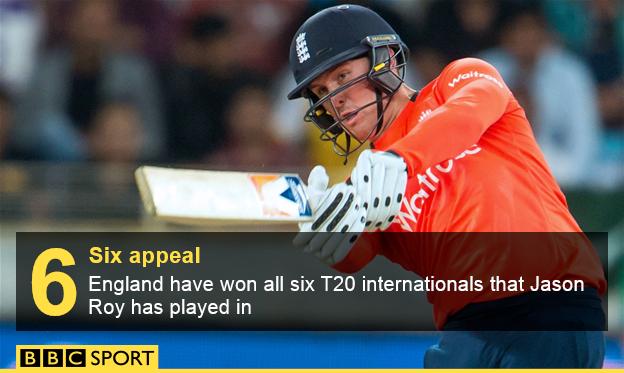 Heading into the 2014 World T20, England could not be accused of lacking a tried-and-tested opening partnership as Nottinghamshire pair Hales and Michael Lumb had opened together on 14 occasions, scoring 640 runs at an average of 45.71.

Lumb's loss of form saw him replaced by Roy and, while his T20 partnership with Hales has yet to replicate their ODI success, Swann is confident they will succeed.

"They're getting a lot more exposure to international cricket in the one-day teams, which will mean they are a lot more comfortable at the crease, are happier to take on riskier options and they're both very good players," he says.

Hales and Roy set the tone for a middle order containing boundary-clearing batsmen such as Morgan and Jos Buttler, with Sam Billings also showing he can emulate his fellow wicketkeeper.

However, Swann says the blend of classical technique and quick scoring offered by Root and James Vince is equally important.

"You always need one guy to hold an innings together while others are blazing it, but he still needs to score at a strike rate of 120, 130," Swann adds.

"Root does that with his eyes closed. He's the linchpin and the most important player England have got in all three formats.

"England are starting to put together a team I'd hate to bowl at."

Do two lefts make a right?

Left-arm seamer Ryan Sidebottom was a central part of England's triumph at the 2010 World T20, taking 10 wickets at 16 apiece, including 2-26 in the victory over Australia in the final.

England have long lacked an adequate replacement for the Yorkshire bowler, who retired from international cricket later that year, yet they now have left-arm options in David Willey and Reece Topley.

Both have shown their ability to swing the new ball, and Willey is set to hone his skills with Perth Scorchers in this year's Big Bash.

"Ryan was definitely one of the reasons we won that trophy," says Swann.

"With Willey and Topley, England have started to find that left-arm option, although neither of those guys have the skill levels of Sidebottom yet."

Swann says there are "good signs" with a pace attack also featuring Liam Plunkett, Chris Woakes and Chris Jordan, with Steven Finn, Ben Stokes and Mark Wood all to return from injury and Broad still in contention for a recall.

But he warns: "I still don't think it's our strongest suit. These guys have got to be exposed to more and more quality T20 players and their skills will improve.

"In India, on small grounds and great batting wickets, the seamers have got to come up with a way of keeping it down to seven or eight an over."

'Spinners might take a pasting - but they win games' 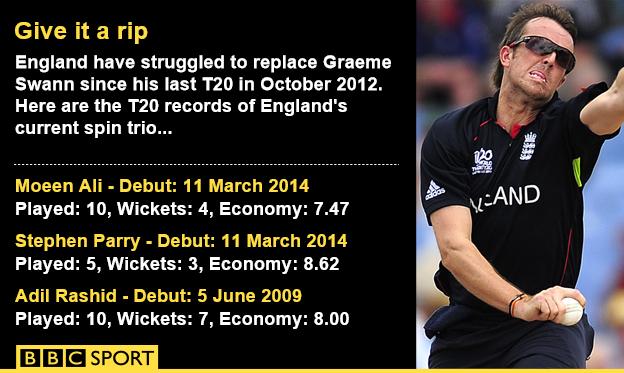 Swann took 51 wickets at an economy rate of 6.36 for England in T20s and was often ably supported by the underrated yet miserly Michael Yardy.

Since Swann's final T20 in October 2012, England's most frequently used spinner in the format, James Tredwell, failed to offer either the same wicket-taking threat or control, claiming seven wickets at an economy rate of 7.87 in 17 games.

The current trio of off-spinner Moeen Ali, slow left-armer Stephen Parry and leg-spinner Adil Rashid remain works in progress but Swann is confident they can succeed.

Rashid is set to turn out for Adelaide Strikers in the Big Bash this winter, and Swann wants to see more spinners exposed to the world's most destructive batsmen.

He says: "Sometimes as a spin bowler you need to play against really big names, realise how good they are and how you're going to stop them.

"It might take getting a pasting or two along the way but these guys are talented enough to adapt.

"In this country we used to rely on seamers pounding out heavy lengths and that just gets panned in T20.

"Spinners win you games by taking pace off the ball and having the skill to coax people out."

So can England win the World T20?

England, who are fourth in the International Cricket Council T20 rankings, face a tough test to reach the semi-finals of next year's World T20 after being drawn in a group containing reigning champions Sri Lanka, 2012 winners West Indies and South Africa.

Morgan admits he does not know his best XI, yet England have only two T20 fixtures on the tour of South Africa before the tournament starts.

"The rest of the world have undoubtedly been ahead so we need to see if we've caught up and overtaken those teams," says Swann.

"Makes no bones about it - it's going to be very hard in India. Those guys know the grounds, know the pitches and they've got that IPL experience coursing through their team, whereas England are very light on that."

"One of the most important things about T20 cricket is learning to handle the pressure in close finishes," he says.

"To make a habit of winning when it's 50-50 or the odds are slightly in their favour is a great thing to have going into a major tournament."

Swann adds: "There are a lot of guys sticking their chest out and putting their hands up, saying, 'I'm going to be the one who wins this game for my country'.

"That's brilliant to see. People are looking to win man-of-the-match awards. The more people you have doing that, the more chance you have of beating world-class teams."