England completed their tour of the UAE with a dramatic super-over win against Pakistan that sealed a 3-0 Twenty20 series whitewash.

After both sides finished level on 154, Chris Jordan's yorkers restricted Pakistan to 3-1 in their extra over.

England had only two from four balls, but, in increasing tension, Eoin Morgan took the winning runs from the fifth.

The win in Sharjah completes an excellent limited-overs tour for England, who followed a 2-0 Test series defeat with a 3-1 win in the one-day internationals.

A sixth successive T20 victory comes in the build-up to the World T20 in India in March. Preparations for that tournament will continue with two matches at the end of the South Africa tour. 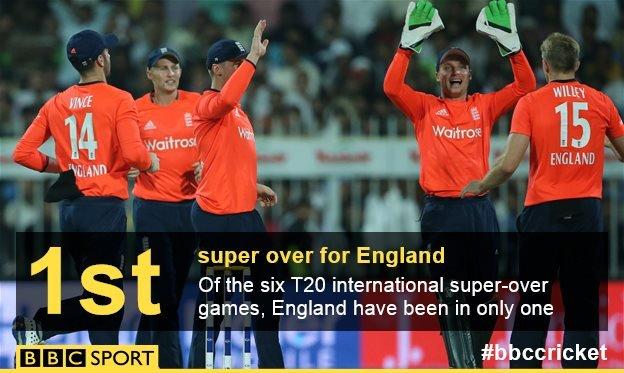 Jordan was England's most expensive bowler in the 20 overs, conceding 39 runs from his four as he regularly missed his length. Therefore, it was a surprise when he was thrown the ball for the super over.

However, the Sussex paceman delivered an exhibition of fast, block-hole bowling that Shahid Afridi and Umar Akmal, who was bowled off the final ball, could take for only one single and two leg byes.

"Handing Chris Jordan the ball in that super over epitomised the quality of our squad," said England captain Morgan. "He's our best yorker bowler so once we decided on that plan, it was an easy decision to go to him.

"Chris Woakes has a different set of skills but once we chose to go for six yorkers, it had to be Jords."

Though the target was modest, England faced nervous moments in the chase as Afridi gave only a single apiece to Morgan and Jos Buttler.

And Buttler could - and probably should - have been run out as he dived to complete the winning run as Anwar Ali failed to gather the throw from the outfield.

That Pakistan managed to get the scores level was down to the flaying of Malik and the impetus of Afridi.

As he did in the second T20, captain Afridi dragged his side into contention, hitting three sixes - including one that went out of the ground - in his 20-ball 29.

When he lost his leg stump to a David Willey slower ball, England looked back in control, yet Malik continued to edge Pakistan closer.

With 11 needed from the final over, Sohail Tanvir hit Woakes for six, only for Malik to hole out off the penultimate ball with two still required.

Pakistan could only scramble a bye from the final ball, sending the match into overtime. 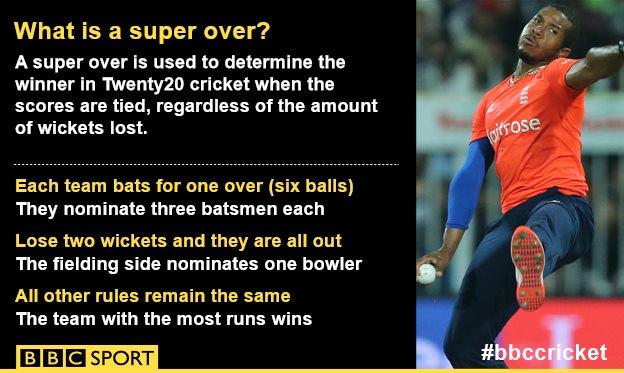 England's continued squad rotation saw Alex Hales omitted and Vince pushed up the order to open, with his partner Jason Roy trapped lbw to the first ball of the innings. In pinning Roy, debutant Aamer Yamin became the 11th man to take a wicket with his first delivery in T20 internationals.

Joe Root looked imperious in his 22-ball 32, but when he was bowled to become the first of two wickets in two balls for Afridi, England subsided to a mix of good spin bowling, smart fielding and questionable batting.

England could have been in deeper trouble had Anwar Ali held on to a simple catch at third man when Woakes top-edged Mohammad Irfran. The tourists would have been 116-7 with three overs to go.

Reprieved, Woakes hit Anwar for two sixes in the next over - one on to the roof of the stand at cow corner - on his way to 37 from 24 balls.

At this point, Vince had been starved of the strike so much that he contributed only eight of the 50 partnership with Woakes, but was jolted into life in a six-ball spell where he took two fours and a six.

Though both men were caught in the deep in Irfan's excellent last over of the innings, they had taken England to a score that proved just good enough. 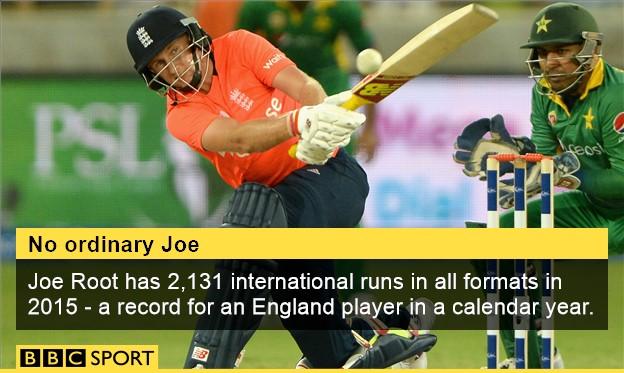 England captain Eoin Morgan: "It's really topped off a fantastic tour. I don't think we deserved to win but we showed fight to take it to a super over and Chris Jordan really stepped up under pressure with six yorkers.

"We've been playing in similar conditions to what the World Cup will be like in India, facing a lot of spin, so it's great to win this series."

England pace bowler Chris Jordan: "That's the first time I've been involved in a super over, in any form.

"It's something we try to work on, so we can deliver under pressure. I was able to hold my nerve."

Pakistan captain Shahid Afridi: "Credit to England, they did well. We played well and batted well but missed an opportunity again. In the last five overs we didn't bowl well.

"Shoaib Malik set an example to the others with the bat and others should learn from him. England are a world-class team. There are lots of positive things to come out of the series. There are problems too, which we have to sort out."