A pink ball, which has been designed to be visible in natural light and under floodlights, will be used but all other playing conditions remain unaltered.

Floodlit Test cricket has been approved by the International Cricket Council (ICC) in a bid to boost attendances.

A first-day crowd of 50,000 is expected for the finale of the three-Test series, which Australia lead 1-0.

Day-night, pink-ball cricket has been trialled extensively across the world, with the traditional opener to the English season between the county champions and the MCC held under lights in Abu Dhabi since 2010.

But the concept is still proving divisive, particularly the use of the pink ball. Here, the likes of Australia great Shane Warne and former England batsmen Kevin Pietersen and Geoffrey Boycott give their views.

While Test crowds in England remain strong, they are on the wane across the rest of the world.

Part of the problem is that Tests are played during the day and usually in the working week, making it hard for people to watch.

Therefore, the longer format is copying one of the shorter forms' selling points, playing into the evening so fans can attend after work or school. Night cricket also means a slot on prime-time television.

"Whilst fans of the game might still view Test cricket as the ultimate challenge, the numbers of people coming to the game seems to be diminishing," said ICC chief executive Dave Richardson.

"We have to play Test cricket at times when it is convenient for people to come and watch. It's the realisation that time is precious in the modern day and this is just one way in which Test cricket audiences perhaps can be encouraged and improved." 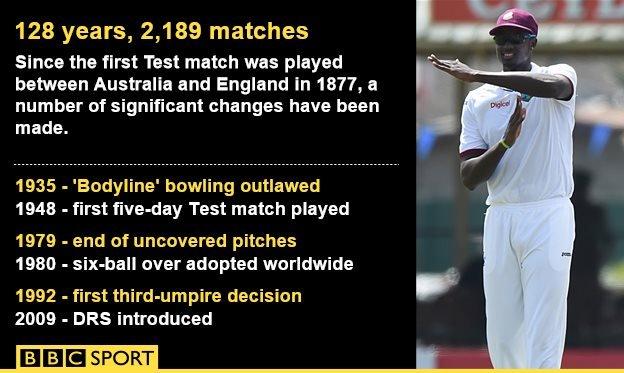 The traditional red ball would be difficult to see against the night sky, while the white ball used in limited-overs cricket will not work with the white clothing and sightscreens of Test matches.

When the Marylebone Cricket Club, the game's lawmaker, invited manufacturers to a consultation, it also explained a desire for the new ball to behave as similarly to the red ball as possible.

Yellow and orange balls were considered but proved problematic for TV cameras until eventually, with the help of Imperial College London, a pink version was agreed.

Even after that, manufacturers Kookaburra went through 16 different shades of pink before they settled on the one that will be used in Adelaide.

Not only has the ball been trialled on the cricket field, but some tests have involved firing it out of a cannon at a wall and even tying a white ball to a weather balloon and sending it into space.

Support has not only come from fans, but also a who's who of greats of the game.

Warne, West Indies great Sir Garfield Sobers, former Australia captain Steve Waugh and India legend Rahul Dravid are some of those to have voiced their approval.

Former England batsman Boycott, who mooted day-night Tests 10 years ago, says change is needed to prevent the game from "dying".

"Cricket is a product and you have to sell it to people," he told Test Match Special.

"Play it at night when people aren't working and the kids have finished school. Sell it as a family cricket."

Cynics could argue it's fine for former players to call for change - they do not have to take part.

Some who are set to play in Adelaide - Australia trio Adam Voges, Josh Hazlewood and Mitchell Starc - have raised concerns about the pink ball, with Australian Cricketers' Association boss Greg Dyer going as far as saying the match could be aborted altogether.

Objections mainly arise from the way the pink ball might behave, with the potential to make batting harder, particularly when the natural light has faded.

This not only leads to concerns over an uneven contest between bat and ball, but also safety issues and players even worrying about their career statistics.

"Test cricket is the pinnacle. Wickets change at night," said former England batsman Pietersen. "Who wants to see a new ball at certain grounds around the world at 8 o'clock at night under lights. Are you mad?

When two red balls from the same box and the same manufacturer can behave differently, it was always likely that a pink ball would bring its own characteristics.

The left-armer, who played with a pink ball against MCC earlier this year, also told BBC Sport: "We found it very difficult to see when the batsman first goes in.

"As dusk comes, it's even more difficult, but it gets easier when night takes over and you can see it more easily."

Though the majority of concerns have been about how the pink ball may put the batsmen at a disadvantage, Sidebottom said the bowlers had problems too.

"It swung for six or seven overs, but then it didn't shine up and had a minimal seam on it," said the 37-year-old. "You want to see a good contest between bat and ball. A lot of bowlers swing and seam the ball so if they are unable to do that, it will make it very difficult."

Australia have even gone as far as calling up a 'pink-ball specialist'. Left-arm spinner Stephen O'Keefe played his only Test more than a year ago, but was included in the squad after taking 18 wickets in three domestic matches with the pink ball. 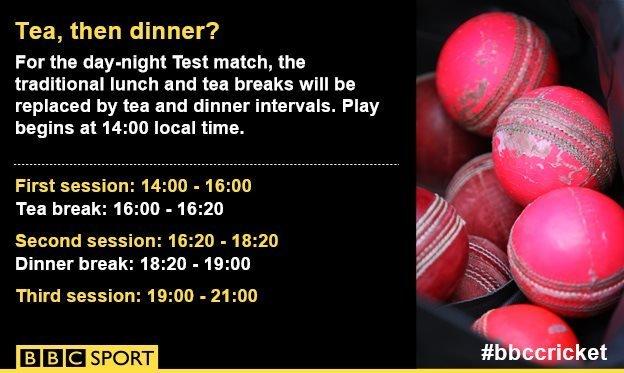 Cricket administrators around the world will been watching events in Adelaide very closely. Not only will they want to see good crowds, but also good cricket, as close to a regulation Test match as possible.

"You don't want it to be farce," said former England captain Michael Vaughan. "You want the players to be able to see the ball.

"Whether the pink ball is right or not they have to find a ball that is right for the lights."

If it is a success, then more day-night Tests will be played. Australia have already invited Pakistan to play a day-nighter in 2016, while Pakistan themselves could hold one in the United Arab Emirates.

However, do not expect them to come to England just yet. Test attendances are good and the long, dusky summer evenings have never been well-suited to day-night cricket.

But, if this innovation works, it could just be the start of the change for a format in need of a boost.

"Why not look at four-day cricket, with 96 overs per day," added Vaughan. "Why not have names on the back of shirts? Why not have a little bit of colour on shirts?

"In future, it's got to be a Test championship - every single match should matter. It has to be a league process with a final an end product as to why we're playing all these Tests."