When England's Jos Buttler smashed his 46th delivery against Pakistan on Friday over the midwicket boundary, it brought up a century of breathtaking artistry, audacity - and speed.

Eighteen months ago, the record for England's fastest one-day century stood at 69 balls. Since then, Buttler has beaten it not once, not twice, but three times.

Around the world, a group of super-charged batsmen is revolutionising ODI cricket.

Leading the way is South Africa's AB de Villiers, who smashed a 31-ball hundred against West Indies in January.

But with strike-rates rocketing and records tumbling, just how much lower can batsmen go?

If a batsman hits every ball he faces for six, the soonest they could reach three figures is 17 balls. Impossible, right?

Or is it? As bats get bigger and batsmen get bolder, could we see a day when someone achieves the toughest feat in sport? 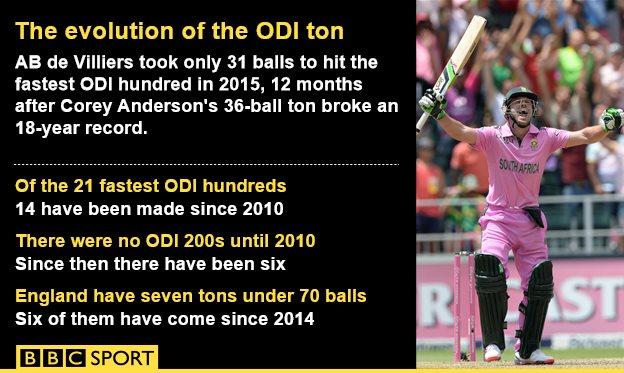 Why are hundreds getting faster?

"Bigger bats, smaller grounds, amazing wickets. And players are bigger and stronger than ever," he tells BBC Sport.

But it's not all about brawn - brain plays a part too, according to former England batter Ebony Rainford-Brent.

"Since the Indian Premier League started, there's a lot of learning that goes on in the global game," she says.

"For example, Eoin Morgan will learn from batting alongside West Indies' Chris Gayle.

"It helps facilitate the speed at which players are learning new skills and feed information back."

"Next thing you know, they'll be playing the Chinese cut deliberately." 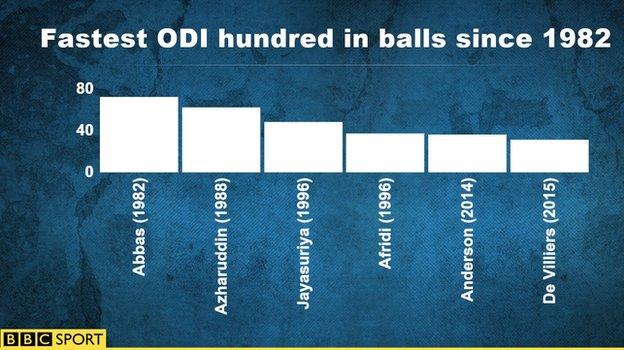 How fast can hundreds get?

Tufnell, who played 20 ODIs between 1990 and 1997, believes century-making may already have reached a natural ceiling.

"I can't see it getting much better than 31 - that's three a ball!" says Tufnell. "Anything in the 20s would be ridiculous."

She adds: "To hit a six every ball is nearly impossible, but someone can hit one or two singles then tee off - in the near future, nearer than we possibly think."

Is the 'perfect' hundred possible?

So could anyone ever reach the magic 17-ball mark?

"You can't hit every ball you face for six," says Tufnell.

"There are too many variations: yorker, short ball. You're going to get yourself in the wrong position at some point."

It may be a near-impossible task, but one thing is certain - nothing will stop this new generation of explosive batsmen from aiming lower and lower.

"It's a bit like the four-minute mile," says Rainford-Brent. "Once people know it's possible, everyone starts improving.

"The more records fall, the more people think about what might be possible and go for it."