Jos Buttler hit England's fastest one-day international century to lead them to an 84-run win over Pakistan in Dubai and a 3-1 series victory.

Buttler reached three figures in 46 balls, beating the 61-ball hundred he made against Sri Lanka in May 2014.

Pakistan briefly threatened a thrilling chase, but were bowled out for 271, with Moeen Ali taking 3-53.

Buttler's effort was the joint-seventh fastest in the history of ODI cricket and the quickest against Pakistan.

He has now scored the three fastest England centuries in the 50-over game, along with a 66-ball hundred against New Zealand in June.

That was Buttler's last score of 50 or more in all international cricket, a run of poor form that saw him dropped from the Test side for the third match against Pakistan this month.

The record for the fastest hundred in ODIs is the 31-ball effort of South Africa's AB de Villiers made against West Indies in Johannesburg in January this year. 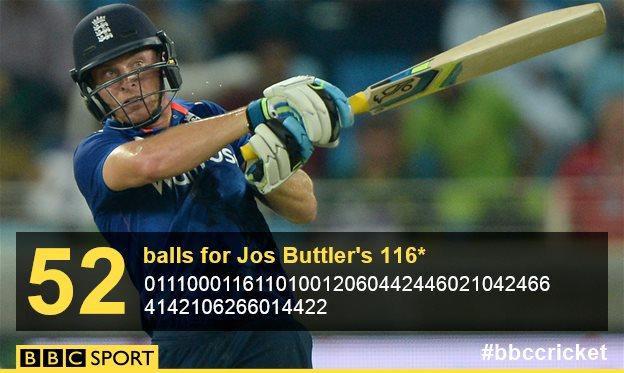 Story of the innings...

Buttler's display of devastating hitting was all the more remarkable considering he did not arrive at the crease until the 36th over.

Promoted to number four after England were given a solid start by Jason Roy's maiden international century (102) and Joe Root's 71, the right-hander wasted little time in signalling his intentions, slog-sweeping Shoaib Malik for six from only the 10th ball he faced.

Brute force over the leg side was a feature of the 25-year-old's innings, with six of his eight sixes clearing the ropes in the direction of deep mid-wicket.

He also showed flashes of ingenuity, playing scoop and ramp shots, as well as one incredible reverse-sweep for four off the pace of Anwar Ali without needing to move his feet.

Anwar was again the bowler when Buttler moved to a century with his third six in four deliveries.

...in an entertaining game

Buttler stole the show, but his star turn was crammed into a 15-over period of an entertaining series finale.

Right-hander Roy overcame some early frailty outside off stump to reach his first ODI hundred in his 15th match, an innings that accelerated with straight and on-drives.

Support came from Root, who was at his free-scoring best until he fell seven runs after Roy was caught at long-off. That was part of a brief Pakistan period of pressure, one which halted by Buttler's brilliance.

Still, on a pitch perfect for batting, the hosts showed the will to chase their huge target, with captain Azhar Ali making 44 from 32 balls, Babar Azam a run-a-ball 51 and Malik most impressive for a 34-ball 52.

However, wickets fell too regularly for the hosts to ever be truly in contention. Mohammad Hafeez was run out in calamitous circumstances and almost all of the rest holed out.

In the end, what is only England's third ODI series win since February 2013 was sealed in comfort.

'Buttler is a superstar' - what they said

Former England off-spinner Vic Marks: "Even the top players on that England balcony will be thinking 'I don't know how he does that'. You can understand why England, even when Buttler's going through a sticky patch in white-ball cricket, keep him in the side as when he clicks he's astonishing. The magic has returned.

"We shouldn't forget Jason Roy's hundred - the top three put England in a position where they could send Buttler out like that."