Chasing 209 in Sharjah, England looked in trouble at 93-4 as they struggled against Pakistan's spinners.

But a superb unbroken 117-run stand between Taylor (67*) and the under-pressure Jos Buttler (49*) led the tourists to a second straight victory.

Three run-outs also contributed to the hosts' downfall as they were bowled out for the second time in the series.

England will clinch their first ODI series win in Asia since beating Pakistan in 2012 if they can avoid defeat in the fourth and final ODI in Dubai on Friday. 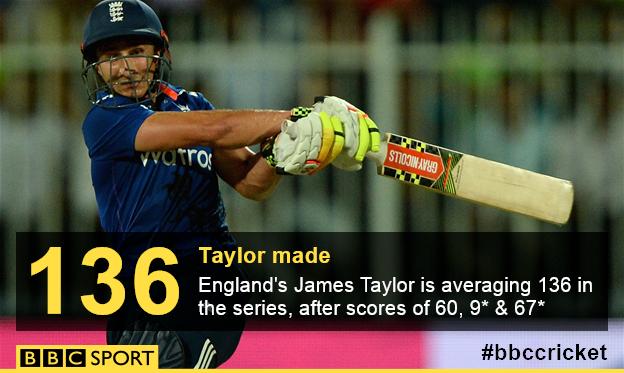 Nottinghamshire batsman Taylor did not play in England's series win over New Zealand at the start of the summer but has since become a key component of Eoin Morgan's maturing one-day side.

Here again he was highly impressive, showing composure and superb judgment against spin to lead England from a position of peril.

Batting fluently in partnership with the more dogged Buttler, he passed 40 for the sixth time in his last eight ODI innings.

For Buttler, who hit the winning runs with a six over deep midwicket, this was a much-needed score after a run of bad form in all formats that cost him his place in the Test side.

The wicketkeeper, who survived a missed stumping before he had scored, was not quite at his explosive best, but showed tenacity to record his highest score in 22 international innings.

Earlier, Pakistan appeared well set for a big score on a flat pitch at 92-1, before a succession of dreadful dismissals surrendered the initiative.

Captain Azhar Ali was run out by yards by Taylor's throw from backward point, before Mohammad Hafeez tamely top-edged David Willey to square-leg.

Sarfraz Ahmed then slogged Moeen Ali, who took 1-30 from 10 overs, to Chris Jordan on the mid-wicket boundary, then Mohammad Rizwan was comically run out by Jason Roy.

That left Pakistan 138-5, and another dreadful blunder was to follow as Shoaib Malik became the third batsman to be stranded short of his ground, run out by Jordan from mid-wicket.

For the second game in a row, Warwickshire all-rounder Woakes was England's leading man with the ball, following his 4-33 in the second ODI with 4-40.

Prior to that, Woakes had failed to take a wicket in his previous six ODIs, but he once again rewarded England coach Trevor Bayliss for his faith with a disciplined display of fast bowling.

He broke Pakistan's opening partnership of 45 with a venomous short ball when he induced Babar Azam to hook to Adil Rashid on the square-leg boundary, and returned to pick off the tail in largely similar fashion.

He removed Iftikhar for three, also caught on the boundary hooking, before another back-of-a-length delivery saw off Zafar Gohar for 15, caught behind.

And Woakes then ended Pakistan's innings by bowling Mohammad Irfan to record his sixth four-wicket haul in ODIs - more than the rest of England's attack put together.

England captain Eoin Morgan: "The performance was hugely satisfying. The pitch turned more than we expected it to do and the partnership between Taylor and Buttler was outstanding - they didn't allow the Pakistan bowlers to bowl as they liked.

"Every role we've given James Taylor, he's excelled in. He epitomises the culture we're trying to create in this changing-room - he works so hard at this game. Hopefully we can produce another performance and win the series."

Man of the match James Taylor: "Morgy and Hales got us off to a good start - and me and Jos were able to take it home. Jos at the other end played an exceptional role.

"The pitch was almost a little bit damper in the second innings, which allowed it to spin a bit more. We tried to sweep as much as possible and not let them settle."

Pakistan captain Azhar Ali: "We had a very good start, but in the middle we just lost it. The run-outs and a few mistakes in the batting cost us the game. We were 40-50 runs short."