For England, defeat by Pakistan was a world away from the Ashes celebrations.

For a packed house at The Oval, see empty seats in Sharjah. A rainy day in south London replaced by a cloudless sky over the desert.

But the questions hanging over Alastair Cook's side not only remain the same after a 2-0 series loss in the United Arab Emirates - they have grown in number.

There are plenty of reasons for optimism, but in the short term a trip to South Africa does not appear to be a welcome Christmas present.

Answers must be found before the first Test against the best side in the world begins on 26 December.

'You could pull names out of a hat'

The role of opening the batting with Cook is starting to look as cursed as the job of Defence Against the Dark Arts professor at Hogwarts.

Seven players have been tried since Andrew Strauss retired in 2012 and Moeen Ali looks set to become the seventh that has either been discarded, moved back down the order, or has retired.

Moeen's promotion from number eight was always likely to be a temporary measure that allowed England to play more than one spinner, but that did not stop Cook from saying he may get the job long term if he succeeded in the UAE.

However, 84 runs in six innings was anything but a success and, given the disappointing return of the touring spinners, England may have been better off giving a specialist opener three Tests to find his feet before South Africa.

The next man in line, likely to be Alex Hales, may well begin his Test career against the game's most fearsome pace attack of Dale Steyn, Morne Morkel and Vernon Philander.

"You could pull names out of a hat and they would all do a similar job," said former England captain Michael Vaughan.

"I think Hales will play, but they will have to take a reserve. If it goes wrong, they might need some experience, and that could come in the shape of Nick Compton." 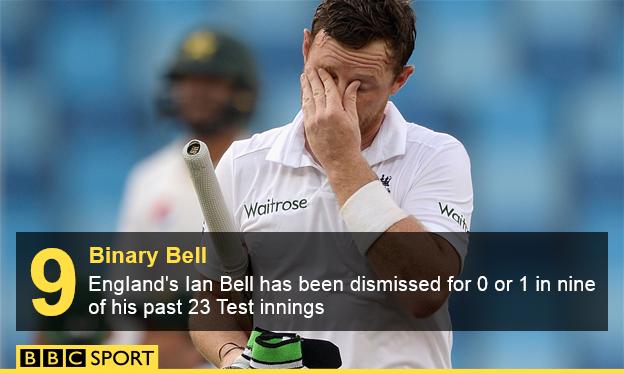 Ian Bell was England's third-highest run scorer in the series, but a total of 158 at an average of 31.60 says more about the failure of the rest of the batsmen than his success.

James Taylor was recalled for the final Test against Pakistan, impressing with a first-innings 74 at number five.

If Bell is dropped - or retires - Taylor could move up to number three, which may allow a recall for Gary Ballance or a debutant such as Hampshire's James Vince.

Do England really want to take on Steyn and company with a rookie opener, a fledgling number three and a new number five?

"Ian Bell is a worry," said Vaughan. "But I don't want to be turning on the telly on Boxing Day and seeing three really inexperienced players in those conditions. I'd try to talk Bell into some kind of form."

Boycott said: "Ian Bell won't retire and they won't sack him because there's no-one else. England should move on."

'You can't keep chopping and changing'

At the end of Matt Prior's England career, Jos Buttler slotted seamlessly into the wicketkeeping gloves and the batting order. His first eight Tests yielded 474 runs at an average of 52.67.

However, an indifferent Ashes was followed by a miserable time in the UAE. Only 34 runs came in four innings and there were signs the glovework was creaking.

When Buttler was dropped for the third Test, his position behind the stumps went to Jonny Bairstow, previously in the side as a specialist batsman but Yorkshire's regular keeper.

Bairstow, though, has problems of his own. Recalled during the Ashes after an 18-month absence, he averages only 25.20 since returning and missed a regulation stumping on the fourth morning of the third Test against Pakistan.

"Bairstow didn't keep and then got thrown the gloves in the last Test. Buttler will get another opportunity, but he needs time out to work on his game."

The spin bowling department was where England were most outclassed in the UAE.

In the third and final Test, where conditions were most helpful, Pakistan's slow bowlers took a combined 17 wickets, while England's served up an abundance of long hops and full tosses for combined match figures of 7-423 from 115.2 overs.

There were mitigating factors; Moeen was burdened with the extra responsibility of opening the batting, Adil Rashid was playing in his first series and Samit Patel was recalled after a three-year absence. In the case of Moeen and Patel, bowling is not the strongest part of their game; they are all-rounders at best.

Moeen is likely to move back down the order and start the South Africa series as the sole spinner.

He can take comfort from a curious statistic. In English conditions, which are similar to those in South Africa, he averages 36.25 with the ball - respectable for what is essentially a fifth bowler.

Only when he has played abroad and been asked to do a job in more helpful conditions, like in the UAE and the West Indies, does that average climb to 43. That must be improved upon when England go to India and Bangladesh next winter.

"He's a better bowler when he's got four seamers alongside him," said ex-England spinner Phil Tufnell. "When he has to bowl a side out in sub-continental conditions, he's not quite up to the mark yet."

Vaughan added: "Moeen has now had a year in international cricket and teams have seen him. They know they can wait for him to bowl a bad ball. He's got to be smarter."

But England do have four 'world-class' players 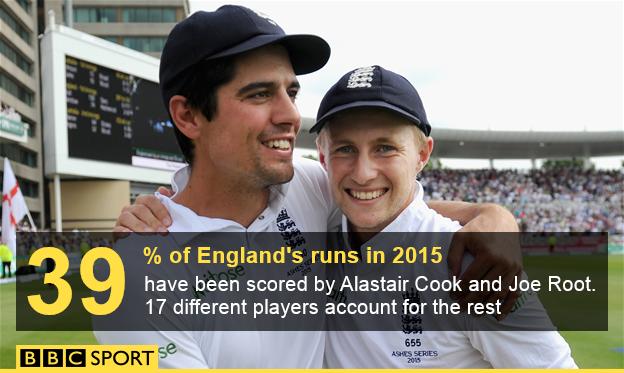 The doubts paint a picture of a team in turmoil, but this is not the case.

Three years ago, an England outfit ranked number one in the world were humbled 3-0 in the UAE. In 2015, a developing side competed for long periods and would have won the first Test had the light held for another 20 minutes.

Batsmen Cook and Joe Root, along with new-ball bowlers James Anderson and Stuart Broad, had outstanding tours. All four would have a decent claim to be included in a current World XI.

The back-up pace bowling is in good hands with Mark Wood and Steven Finn, while Ben Stokes has cemented his place as an all-rounder. England will be desperate for him to recover from a shoulder injury in time for South Africa.

"But England have to address the batting collapses and not only win Test matches when Broad and Anderson take five or six wickets each.

"That's why the backroom are paid - they are there to solve these problems."