England are still confident of winning the third and final Test against Pakistan in Sharjah, according to batsman James Taylor.

Pakistan are 146-3 after day three and have a lead of 74 runs over England, who must win to avoid a series defeat.

"We're confident in chasing whatever target they set us," Taylor, 25, told BBC Sport.

"The wicket is playing better than it has done all game and everyone can see that we are playing spin a lot better."

England have the disadvantage of batting last on a pitch that has offered assistance to the spin bowlers throughout, with Pakistan's slow bowlers taking eight wickets between them in England's first-innings total of 306 all out.

"It's close," former England captain Michael Vaughan told BBC Test Match Special. "It is on an edge but I would still prefer the runs on the board.

"I would prefer to be in Pakistan's dressing room now - but only just."

Pakistan looked set to take control on day three when a century stand between Mohammad Hafeez and Azhar Ali wiped out England's first-innings lead of 72.

But three wickets in the evening session, including one each to the excellent pace pair of James Anderson and Stuart Broad, dragged the tourists back into contention.

Taylor, who made 76 on his recall to the Test side after a three-year absence, added: "I think it's firmly in the balance.

"The way Jimmy and Broady bowled was unbelievable. They showed a lot of character and discipline and got their rewards.

"It's going to be a massive first session on day four for both teams. Hopefully we can get early wickets."

Listen to commentary highlights from the series on Pint-Sized TMS 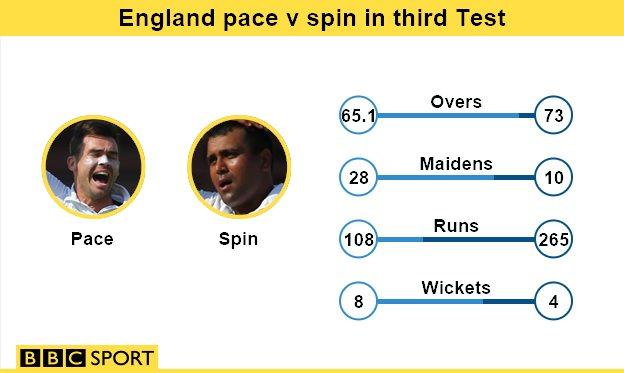