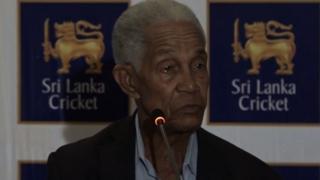 West Indies legend Sir Garfield Sobers sheds tears during a news conference in Sri Lanka over the state of the game in his homeland.

West Indies are eighth in the Test rankings, above only Bangladesh and Zimbabwe.

The 79-year-old former all-rounder says it "hurts" him that too many current players in the Caribbean seem not to think about the team, but instead seek lucrative contracts in the 20-over Indian Premier League.