"If I was England captain Alastair Cook, I'd be getting hold of Yorkshire captain Andrew Gale. Get him on the phone and find out about Adil Rashid."

The words of former England off-spinner Graeme Swann on BBC Radio 5 live as leg-spinner Rashid made his Test debut against Pakistan in Abu Dhabi last week.

"Cook needs to learn about Rashid because he won't have captained him very often. He's got to learn how to get the best out of him.

"Pick his brains. There are all these things that Gale will know from their time at Yorkshire."

BBC Sport did just that - and gave Yorkshire captain Gale a call.

How do Yorkshire get the best out of Rashid?

Rashid's Test debut as part of a two-man spin-attack came after taking a total 78 wickets in Yorkshire's County Championship wins of 2014 and 2015.

"In the first innings, we have such a good seam-bowling attack that we predominantly use them until the last three or four wickets," said Gale.

"I always bring Rash on when they are six or seven down because he's best suited against the tail in the first innings. We encourage him to use his variations because tailenders really struggle to pick him.

"In the second innings we set the field back and encourage him to spin the ball as hard as he can. I know he might bowl a few bad balls, but usually the outcome is he will pick up wickets."

Seven years after being called into the England Test squad, Rashid's first taste of the highest level resulted in miserable figures of 0-163 - the worst by a Test debutant.

However, it should be noted that all spinners struggled in Abu Dhabi. At one point the slow bowlers in both teams had conceded a combined total of 500 runs without taking a wicket.

And, when Rashid bowled again in the second innings, his 5-64 not only set up the tourists' unlikely push for victory, but also made him the first leg-spinner to take a five-wicket haul for England since 1959.

Former England captain Michael Vaughan said: "Rashid is an impact bowler. Short, sharp bursts. When's it not working, get him off."

"Rashid is not a first-innings bowler, we know that. He is there to win games in the second innings," Swann said after Rashid recorded 0-163 in the first innings, but before the second-innings 5-64.

The contrasting figures returned by Rashid support Swann's theory, but there is a wider point.

Spinners often offer a wicket-taking option role later in a Test as the pitch wears, but the very best, like Swann himself, are able to contain when conditions are not in their favour.

Rashid conceded almost five runs an over in Pakistan's first innings, compared with the 2.54 of Pakistan slow left-armer Zulfiqar Babar. The difference? Rashid's leg-spin is more aggressive than Babar's finger spin and is therefore more likely to leak runs.

So does Gale think Rashid should mainly be saved for the second innings for England?

"Yes and no," said Gale. "Most spinners get the majority of their wickets in the second innings and if you told Rash to bowl in the first innings and keep runs down, that would be the wrong message.

"However, he can still take wickets in the first innings, especially in the sub-continent. Wickets dry the runs and you have to take 20 wickets to win a Test match.

"I wouldn't say he can't bowl in the first innings."

Toiling in the first innings, Rashid was often too slow or too short, leading former England left-arm spinner Phil Tufnell to say that he could have "pushed it through a bit more".

Swann said: "Someone has been telling him to bowl at 47 or 48mph. That is absolute garbage. You have to assess the situation and change your pace accordingly. It is different for every batsman on every surface."

Rashid might have been listening. Whereas in the first innings the average speed of his quickest ball was 52.8mph, that figure rose to 54.4mph in the successful second-innings spell.

How quickly does he bowl for Yorkshire?

"We always talk about him bowling 52mph," said Gale. "Graeme Swann is right - you do have to adapt.

"It's something that Adil has worked hard on. He's gone from bowling very slowly at the start of his career to bowling quicker in the limited-overs formats. In the longer games, he's really finding what his optimum pace will be." 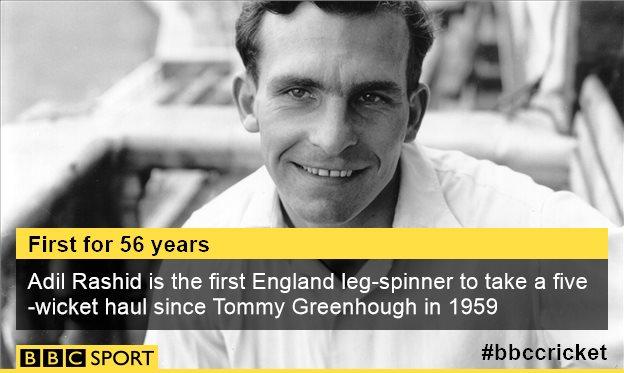 'Adil is definitely a match-winner'

Former England opener Geoffrey Boycott said of Rashid: "He's not Shane Warne, and he can go for runs, but there is something about him and we don't have another spinner in England who can do what he does."

Rashid has found his way into the Test side alongside Moeen Ali in a two-man spin attack suited to sub-continental conditions.

However, Moeen, an all-rounder rather than a specialist off-spinner, could come under pressure if he does not deliver in his new role as opening batsman or if Rashid, himself a capable batsman, proves a bigger threat with the ball.

Could Rashid ever find himself as England's sole spinner?

"The more match-winners you have in the side, the more chance you have of winning games of cricket," said Gale. "Adil is definitely a match-winner.

"There's no reason why he can't continue to develop and put some pressure on Moeen Ali.

"There will be times when things don't go quite as planned, but there will also be times when he wins England games of cricket. Who knows how far he can go?"