The first match of the series begins in Abu Dhabi on Tuesday at 07:00 BST.

"This is the most difficult by a country mile because of the conditions and because of the inexperience of spin that England have got," said Vaughan.

"I wonder if England have missed a trick with their preparation." 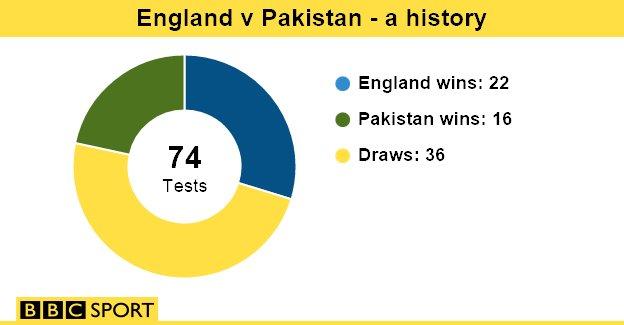 England beat Australia 3-2 in this summer's Ashes series, and visit South Africa for a four-Test series in December and January, but Vaughan says the UAE tour "tops the bill".

England lost 3-0 when they last faced Pakistan in the UAE in 2012, when their batsmen repeatedly struggled on the slow, spin-friendly pitches.

Pakistan have not lost any of the seven Test series they have played in the UAE since 2010, and Vaughan feels England's two two-day warm-up matches were inadequate preparation.

"I do worry that England haven't had competitive games going into this series in such a challenging place," he said.

"Have they had enough time in the middle to go out and produce a big score in the first innings on Tuesday? Could they have come a bit earlier? I would question that."

Vaughan added the "roasting" temperatures were "as hot as I've ever felt on an England tour".

Moeen promotion 'not a short-term measure'

England captain Alastair Cook will be partnered at the top of the order for the first Test by all-rounder Moeen Ali - his seventh opening partner since the retirement of Andrew Strauss in August 2012.

Moeen has never batted higher than number six for England, but Cook said his promotion was "not at all" a short-term measure.

"Every time he plays he's got an amazing ability to contribute," he said.

"We've struggled over the last two or three years for a guy to make that spot his own, so we've given him the opportunity. If he bangs out three hundreds he'll be there as long as he wants to. "

Vaughan says promoting Moeen is a "risk", but one England have to take.

"I can understand people saying he's not the answer, he's a short-term fix, but I think that's where England are at," Vaughan said.

"For this tour - and I think you have to categorise this tour completely separately to what South Africa is going to be - playing Moeen at the top of the order gives England six bowling options."

He said: "I think it's a stop-gap decision because they can't seem to find an opening batsman to partner Cook and they're not sure what to do.

"He takes chances, he may come off, he may not. But he doesn't seem to have a tight enough defence for me to make a success of it .

"He'll have the odd innings when he plays well, but he'll have some more when he gets himself out."

Fast bowler Steven Finn will not be among England's bowling options for the first Test after he was ruled out with a stress injury to his foot.

Finn took 4-16 in the second warm-up match against Pakistan A, and Cook said he "had every chance" of being named in the Test team before getting injured.

"He was probably our most impressive bowler in the warm-up games," Cook added.

Finn's injury means James Anderson is certain to play but Vaughan says the Lancashire player must prove he can adapt to the conditions.

"Jimmy Anderson has got all the expertise," he said.

"But over the last year or so when Pakistan have played here, conventional swing has not been that effective - it has come down to pace and spin."

Cook also said 27-year-old Yorkshire leg-spinner Adil Rashid - who took 0-55 and 3-53 in the warm-up matches - will make his debut.

"Adil has played major roles for Yorkshire over the last two or three years - he's taken a lot of wickets and scored a lot of runs," he said.

"He's bowled really well on this trip and we're really excited to see how he goes."

Bell and Buttler searching for form

Number three batsman Ian Bell and wicketkeeper Jos Buttler look set to play in the first Test, but both are under pressure after a run of low scores.

Bell, who made 19 and 53 in England's warm-up matches, has gone 17 innings without a century and is averaging just 24.29 this year.

Buttler has not passed 50 in his past eight Test innings and made a total of 41 runs in three innings during the warm-up games.

"Ian Bell has got to start scoring runs at number three," Vaughan said. "We're kind of papering over the number three position. England need him. He's got to be the leading light.

"Buttler is a wonderful talent - we've seen that in one-day cricket, T20 cricket, we've seen it briefly in Test match cricket. But we haven't seen it consistently.

"England are very loyal with him, he's a real good team man. But he has to produce. It's time to stamp his mark. If he doesn't and he struggles, questions will be asked."

Boycott says Buttler's form should be of real concern to England.

He added: "The lad has enormous talent. But he's just playing poor shots, poor thinking shots. Sweeping straight away with the spinners and that's fraught with danger. I think its tiredness. It's a question mark."

Pakistan leg-spinner Yasir Shah is doubtful for the first Test after he suffered a back spasm in training.

"We are hoping that he will be fine," Pakistan skipper Misbah ul-Haq said. "That would be a big blow for us - he is the key player."

Left-arm spinner Zafar Gohar - who took a total of five wickets for Pakistan A in the two warm-up matches against England - has been called up as cover.

England fans may not be familiar with the name, but if he plays, Yasir could pose one of the biggest threats to a batting line-up hardly renowned for its ability to play spin.

He bears more than a passing resemblance to Argentina and Barcelona forward Lionel Messi and bowls with an action modelled on his idol, legendary Australia spinner Shane Warne.

Although he did not make his Test debut until October 2014 at the age of 28, Yasir has enjoyed a remarkable first year at the top.

He became the quickest Pakistan bowler to 50 wickets - in only nine Tests (Warne needed 14) - and his tally of 61 at an average of 24.81 has taken him to fourth in the International Cricket Council rankings.

Given that 48 of England's 60 wickets fell to spin on their most recent Test series against Pakistan in the UAE, expect Yasir to play a prominent role in the coming weeks.

Meanwhile, batsman Azhar Ali is set to miss the first Test after failing to recover from a foot injury sustained during a pilgrimage to Mecca earlier this year.

How hard is it to beat Pakistan at 'home'?

Pakistan have not played a Test in their own country since terrorists attacked the Sri Lanka team bus in 2009.

However, they have won three and drawn four of their seven Test series since relocating their home matches to the UAE, which includes a 3-0 mauling of England in 2012.

Misbah has suggested England's current team "may appear weaker" than that side - a claim rejected by Anderson.

England were bowled out for fewer than 200 runs in four of their six innings, most memorably when collapsing to 72 all out in pursuit of 145 to win the second Test.

Australia lost 2-0 in the UAE in October 2014, while neither South Africa nor New Zealand managed to win in Pakistan's 'home' conditions in the past two years.