England slumped to 138 all out to hand Australia an eight-wicket win and a 3-2 series victory in the deciding one-day international at Old Trafford.

The home side were reduced to 22-3 in the sixth over and then saw captain Eoin Morgan retire with concussion.

They failed to recover and were eventually bowled out in 33 overs, Ben Stokes making 42 and Mitchell Marsh taking 4-27.

Australia eased to their target inside 25 overs, with Aaron Finch 70 not out.

For the visitors, sealing the one-day series on the final day of their tour represents a degree of consolation after a 3-2 defeat in the Test series.

Though England's summer ultimately ended as a disappointing anti-climax in front a packed crowd, the success they have enjoyed is far removed from the spring-time World Cup humiliation and poor tour of the West Indies that followed.

A thrilling drawn Test series with New Zealand was followed by a new approach to one-day cricket that resulted in a 3-2 win over the Black Caps and a competitive contest with world champions Australia, where they came from 2-0 down.

Most importantly, the Ashes were regained.

England will have been pleased to win the toss in sunny conditions and have the opportunity to bat first on a true Old Trafford pitch.

But an eventful first over, with Starc swinging the ball at a full length, provided a glimpse of what was to come.

Jason Roy was given out leg before to the second delivery before successfully over-turning the decision thanks to an inside edge.

However, when he was given out again from the fourth delivery, Roy walked off. Neither he nor partner Alex Hales spotted that the ball was missing leg stump by some distance. 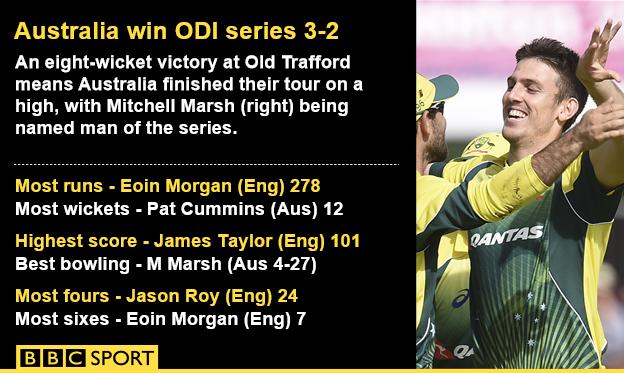 From there, England had no answer to some very good Australia pace bowling, with Marsh and John Hastings particularly causing problems with consistency of length.

Hales sliced Hastings to point for four to probably end any notion of a call-up for the winter Test series, with James Taylor then feathering the same bowler behind.

After Morgan was forced to retire, Jonny Bairstow was given out lbw on review to Marsh, while the right-armer picked up Moeen Ali and David Willey in the space of three balls.

Stokes sparkled with powerful drives and pulls but after he became Marsh's fourth victim, lbw to one that nipped back, Adil Rashid was left to eke what he could from the tail.

He made a composed unbeaten 35, supported by Mark Wood and debutant Reece Topley, who was last out when pinned in front by Ashton Agar.

England's plight was not helped by the injury to Morgan, who suffered a concussion when struck on the back of the head from a Starc bouncer in the seventh over.

The left-hander had to be steadied by short leg fielder George Bailey, before sitting on the turf to receive treatment.

There was concern from the Australia team, less than a year on from the death of Phillip Hughes, while Starc was comforted by Smith, Hastings, coach Darren Lehmann and Stokes.

Later in the England innings, it was confirmed that Morgan would play no further part in the match, with Taylor taking over as captain.

England had a glimmer of hope at the interval after Joe Burns edged Willey behind in the first over and Smith followed in similar fashion to Wood to leave Australia 31-2.

But that was snuffed out by an unbroken stand of 109 between Finch and George Bailey, who added 104 runs in 14.2 overs after the break.

Finch played drives and pulls of the spinners and swept Moeen, while Bailey punished the poor Rashid, who conceded 34 runs from four overs.

Bailey sealed it by edging Topley for four, with both sets of players now awaiting squad announcements for their next tours.

Australia go to Bangladesh, while England's party for the series against Pakistan in the UAE will be named this week.