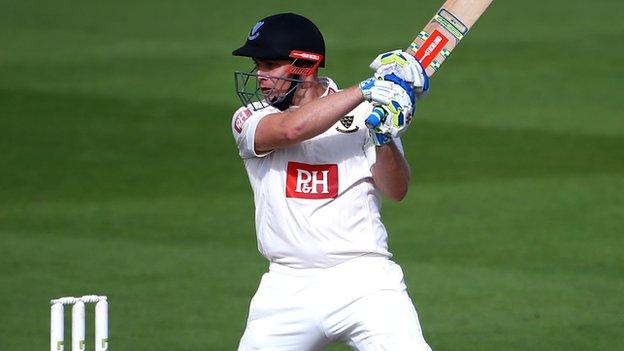 Luke Wright hit the first double century of his career to put Sussex on course for victory over relegation rivals Worcestershire at New Road.

He put on 282 with Ben Brown, who made 108, before Sussex captain Chris Nash returned to the crease to make 90 after retiring the previous day.

The hosts slumped to 59-3 by the close, needing 241 to make Sussex bat again.

And, even if they do manage to avoid defeat, rejuvenated Hampshire's three-day win against Durham means that Worcestershire will go into the final two matches bottom of Division One.

Wright, who surpassed his previous best of 189 against Durham at Hove last season, survived three dropped chances - on 118, 175 and 204.

But, in between, he played some powerful shots as he and Brown surpassed Sussex's previous best stand of 226 against Worcestershire, shared by George Cox and Gordon Potter at New Road in 1954.

Even after Brown's dismissal following his fourth century of the season, there was still more to come from Wright in his six-and-a-half hour knock.

He shared a 104-run stand with Nash, who retired hurt with concussion on day two after miscuing a ball from Charlie Morris into his helmet.

When they were put back in, with a deficit of exactly 300, Worcestershire faced the task of batting for four sessions to save the game.

But, although bad light halted proceedings with nine overs remaining, it still went badly from the moment that Steve Magoffin broke through in his second over, trapping Brett D'Oliveira lbw.

Home skipper Daryl Mitchell, who had been absent during the morning session to attend the birth of his second child, added 39 with Tom Fell in fading light which forced Sussex to turn to spin.

But that triggered a double success for the visitors as Luke Wells had Mitchell caught at slip before Fell (26) went the same way off Ashar Zaidi.

"There is a lot to play for but we've got some good players in the tent who are very capable. We need a couple to have a very good partnership.

"We have to make sure we bat three sessions and, if we get help from the weather, then great. That's our task, to try and bat as long as we can.

"But it was a very tough day. Sussex were outstanding and we were totally outplayed with bat, ball and in the field."

"It feels pretty special to get my career-best. I was just hoping for the two runs this morning and had to work really hard just to get my hundred.

"They bowled well and I had some luck on the way but it's great to get 200. Twice I've just missed out, so to do it in a big game made it special.

"I love batting with Browny. We always seem to score quickly. We compliment each other well."