England captain Eoin Morgan struck seven sixes in a thrilling 74 as his team beat Australia by five runs in a tense one-off Twenty20 at Cardiff.

Morgan and Moeen Ali (72 not out) shared a third-wicket partnership of 135 in 75 deliveries as the hosts smashed their way to 182-5.

However, in reply Australia looked to be coasting home as captain Steve Smith hit an imperious 90 from 53 balls. 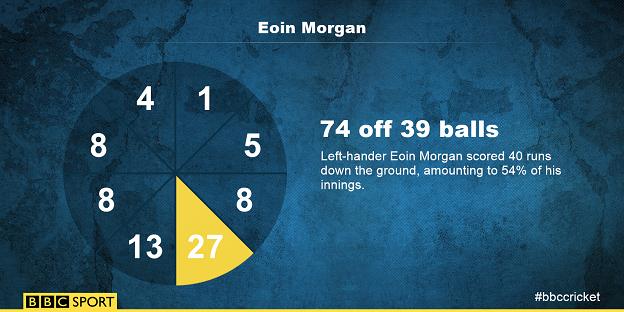 A total beyond 200 looked likely with Morgan in full flow. In his first innings for 30 days following a break from the game, the Dublin-born left-hander passed Kevin Pietersen to become England's highest T20 run-scorer.

But when he was caught on the boundary rope by Shane Watson attempting to send Nathan Coulter-Nile for a maximum, England managed just 29 runs off the final 22 balls.

When Australia batted, the recalled Watson was dismissed in bizarre fashion as he tried to defend a good length delivery from Steven Finn.

With the ball heading towards the stumps, the 34-year-old failed to kick it clear and was bowled.

Smith shared a stand of 112 with Glenn Maxwell, who was brilliantly caught in the deep by Ben Stokes off man-of-the-match Moeen's first ball.

The captain's unorthodox but clean hitting produced seven fours and four sixes, bringing up a first half-century in his 17th T20.

However, David Willey made the crucial breakthrough as Smith looked to clear deep mid-wicket but could only pick out Sam Billings.

With the visitors requiring 12 from the final over, they lost three wickets - including the run outs of Michael Wade and Pat Cummins - as Stokes held his nerve brilliantly to clinch another victory for England over Australia, following their Ashes success this summer.