Australia regained the Women's Ashes after England collapsed to 87 all out to lose the second Twenty20 international by 20 runs.

Needing to win at Hove to keep the multi-format series alive, England were chasing 108 but slipped to 10-3 and 23-5, with Ellyse Perry taking 2-13.

Lydia Greenway made 26, but was last out with five balls to go.

Australia, who managed only 107-7, take an unassailable 10-4 lead on points with just one T20 remaining.

In doing so, the Southern Stars win the Ashes for the first time since 2010-11, England having won on both occasions since the multi-format of three one-day internationals, a Test and three T20s was introduced in 2013.

Behind 8-4 after losing the Test and two of the ODIs, a superb bowling display meant the hosts required only a modest target to take the series into a deciding T20 in Cardiff on Monday.

But, as with most of the series, England's batting was once again below par and they crumbled to their lowest ever T20 score. 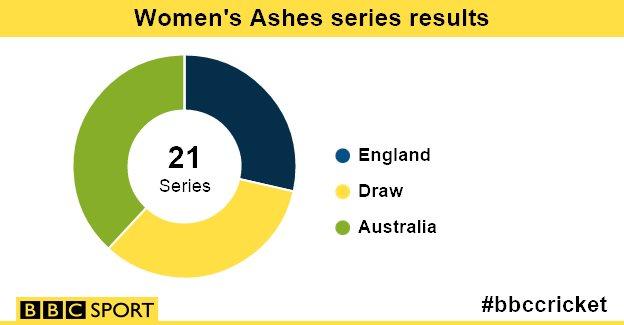 On a slow pitch, the Australia decision to include seamer Rene Farrell over spinner Erin Osborne proved to be an excellent choice as the 28-year-old claimed 3-17, including Sarah Taylor and Heather Knight in her first over.

Greenway gave England hope, her sixth-wicket partnership of 25 with Katherine Brunt the highest of England's innings between the only two players to reach double figures.

But after Brunt was bowled by Megan Schutt and Danni Wyatt was unluckily run-out backing up, England, captained by Charlotte Edwards, looked beaten, a result confirmed when Greenway heaved Farrell to cow corner.

Their good work was backed up by spinners Rebecca Grundy and Danielle Hazell as the tourists lost three wickets for eight runs in 11 balls to collapse to 51-4.

But star of the Test match Jess Jonassen and Jess Cameron both made speedy scores of 21, with Australia taking 16 from the final over.

Their total did not look competitive, but it was enough to ensure 23-year-old Meg Lanning became the youngest ever Australia captain, male or female, to win the Ashes.