Two centuries in five Tests. An opener with the lowest run tally in Ashes history. Only three batsmen averaging over 30. A spinner leaking runs.

Has a team ever won the Ashes with so many question marks hanging over it?

England's 3-2 triumph over a heavily favoured Australia was a remarkable achievement and featured some wonderful moments of individual skill from a young, developing side.

Yet resounding defeats at Lord's and The Oval exposed serious flaws that need to be resolved if the team are to achieve lasting success.

"England are mercurial," said former spinner Graeme Swann. "They are either red hot or ice cold."

England face away series against Pakistan, in the United Arab Emirates, and South Africa over the next five months, with director of cricket Andrew Strauss admitting they must "make some big improvements in a short space of time".

Trouble at the top

It feels like a lifetime ago that Adam Lyth was soaking up the adulation of his home crowd after a century against New Zealand in his second Test at Headingley.

One gruelling series later, he appears certain to join the roll-call of those who have tried and failed since 2012 to fill the spikes of Strauss alongside Alastair Cook at the top of England's batting order.

As the series elapsed, Lyth's innings became increasingly painful viewing as he diced with danger outside off stump before the ball inevitably found the edge of his bat.

His haul of 115 runs in nine innings is the lowest by an Ashes opener playing at least five Tests. 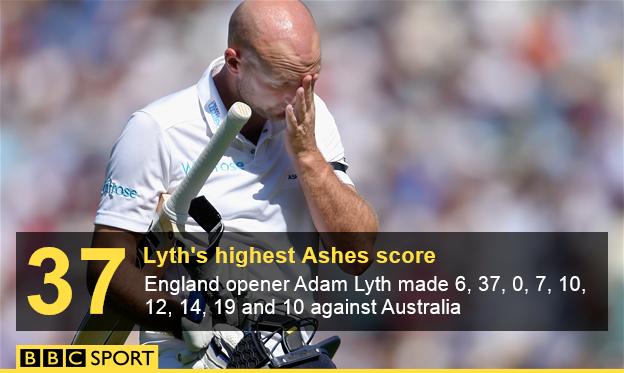 Coach Trevor Bayliss has hinted that Moeen Ali may be promoted seven places in the batting order to allow England to accommodate an extra spinner in the UAE.

But his susceptibility to the short ball suggests a different approach may be needed against South Africa's quick bowlers, where Nottinghamshire's Alex Hales and Yorkshire's Gary Ballance could come into the reckoning.

"Moeen could open in the UAE. He's a bit loose but he plays some lovely shots," said ex-England batsman Geoffrey Boycott.

"But he'd need a lot of luck opening against Dale Steyn in South Africa.

"Hales is a big front-footer - that may work in the UAE, but don't tell me he's going to play on the front foot against Steyn and Morne Morkel."

England's batting frailties predate this Ashes series, but there was little sign of a solution to an ongoing complaint.

In eight completed innings over the series, only once did England lose their third wicket with 100 runs on the board, and on three occasions they were three down for fewer than 50.

Dropping Gary Ballance and shifting Ian Bell up to three proved a short-term fix at Edgbaston, but as Bell's form deserted him in the final two Tests, England soon reverted to type.

On the two occasions when Australia scored more than 400 batting first, England never got close to matching their score, with only Root and Cook showing the patience required to play a long innings.

"With bat in hand, England have a big problem," said former captain Michael Vaughan. "Joe Root is a class act, Alastair Cook has led the team brilliantly, because when you're under the pump it's about low-risk cricket shots.

"There's so much talent and the batting line-up is so deep, but they should be able to put scores on the board in any conditions.

"When they get to the UAE, they're going to have to bat 130 overs in the first innings. If they get bowled out cheaply, they're not going to win many Test matches."

Although Jos Buttler's wicketkeeping hit new heights in the series, his batting never got off the ground.

Seemingly determined to adapt his game to Test cricket by leaving his assortment of powerful shots in the dressing-room, he cut a tentative figure at the crease and failed to make a fifty in eight innings. 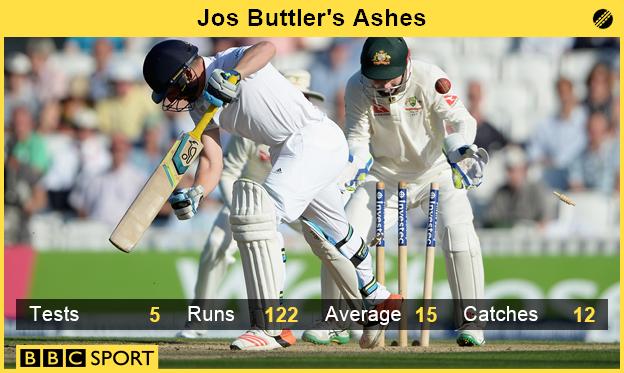 In fact, the Lancashire player finished the series with a lower strike-rate - 49 runs per 100 balls - than every England player except the two openers and number 11 Steven Finn.

According to Swann, Buttler should trust in the methods that have made him such a force in the limited-overs formats.

He said: "From a spin bowler's perspective, if there's a player like Jos Buttler who can reverse-sweep me for six in a one-day game who then changes the way he bats in first-class cricket, I'm over the moon, especially when he clearly has defensive flaws in his technique."

Moeen Ali chipped in with 12 important wickets in England's Ashes success - but they came at a cost.

He conceded the second most runs - 546 - of any bowler on either side, with the worst economy rate - 4.41 runs per over - of any front-line bowler.

Somehow, Moeen must learn to provide more control, especially in the UAE where he will be asked to bowl long spells.

Yorkshire leg-spinner Adil Rashid will probably get his chance in that series after conducting 12th-man duties in England's last three series.

But as England's search for a world-class spinner to replace Swann goes on, the man himself believes the blame lies with coaching at grass-roots level.

"The problem runs quite deep, back to the way kids are first taught to bowl spin in this country, which is wrong," says Swann, who took 255 Test wickets before retiring in December 2013.

"They're told to grip the ball on the ends of your fingers and pretend you're opening a door knob which will never teach you to spin the ball, get it to dip or fizz through the air. Until that's rectified, you're going to get a dearth of spinners."

In a full body examination of England's various parts, the seam attack comes out in the rudest health.

Stuart Broad, James Anderson, Steven Finn and Ben Stokes all contributed hauls of six wickets or more in the series, while Mark Wood touched 90mph and claimed the wickets that won the Ashes.

It should be noted, nonetheless, that all of those feats were achieved on the made-to-measure green pitches of Edgbaston and Trent Bridge.

When confronted with flatter tracks at Lord's and The Oval, England's bowling looked toothless and samey at times.

"When the pitch isn't doing what England expect, they've got to create something different with the likes of Wood and Stokes," said Vaughan.

"Broad and Finn are the consistency. Look at how Mitchell Marsh and Peter Siddle have bowled consistent lines and lengths and Mitchell Johnson and Mitchell Starc have been the firecrackers."

Are we being overly harsh by picking at England's faults rather than revelling in their strengths?

When England scored consolation wins at Sydney or The Oval during their barren years of the 1990s and early 2000s, Australia were hardly plunged into introspection.

In winning the Ashes with one Test to spare, England far exceeded expectations and transformed the image of a team that looked so uninspired during the World Cup and West Indies tour.

But, as Cook conceded afterwards, they are "nowhere near" their peak.

Watching this exciting but unpredictable team try to get there promises to be compulsive viewing.